‘We should all start flocking there ASAP to fill our mouths with the deliciously hot gloopy goodness.’

And they’re not the only ones, The Huffington Post and The Metro have also published pieces on Manchester’s proposed new ‘deluxe cuisinery’ - devoted entirely to that most northern of meat lube: gravy.

The Huff said: ‘In one of the best things to happen on 2017 so far, a gravy restaurant is opening in Manchester.’

Whilst The Metro, stamping its foot, said the lack of a clear opening date ‘…is totally unfair because we’re all very excited about a bar filled with gravy.’

The news has even made it as far as Denmark, where news site nyheder.tv2.dk became very giddy about the world’s first ‘sovsebar’ (sauce bar, we’re guessing):

‘You have probably heard of wine bars and coffee shops,’ reads the article, ‘but you appear to be a fairly large sauce enthusiast to go on sovsebar… are the initiators full of confidence and belief in their sovsebar’.

Lost in Google translation, that one. But very funny.

"But far from being a venue with straws shoved in jars of warm gravy - can you imagine?"
Yeah, about that… @lovin_mcr pic.twitter.com/eeJ3jydoBn
— Gravy Bar MCR (@gravybarmcr) March 28, 2017

Alas, we’re afraid the ‘belief’ in Manchester’s sovsebar is (almost definitely) misplaced, and little more than a Twitter parody account (@gravybarmcr) poking fun at the current hipster-fuelled obsession with mono-menus (cereal, featherblade… isn’t there a hummus place in London?), plus anything sneezed across wood or stuffed into a jam jar.

But, you say, a gravy bar opening in Northern Quarter (where else?) is not entirely inconceivable, is it? After all, there’s a cereal café and a cat café nearby. True. But we put to you this:

But the best of the lot? As if to hammer home the sheer preposterousness of it all, one Twitter user, seemingly without artifice or irony, asks: ‘…and will there be vegan options?’ Ha. It’s pulverised dead animal you pillock. Oh do beam me up, Nathan Barley.

Now watch the bastards open one... 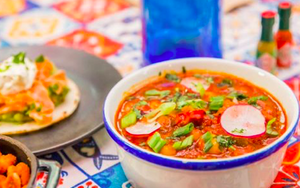