Is Manchester Arena getting a massive bee and a wood on the roof?

It’s 25 years since the Manchester Arena was built as part of a way of impressing International Olympic Committee (IOC) members. Whether the building did or didn't is uncertain. The problem was that members didn't seem keen on Manchester generally. Or maybe the city wasn’t prepared to give out cash in brown paper bags to IOC members during a time when the IOC could have won gold medals in corruption and insider dealing.

What was new and bright then has become a big functional lump today. There’s one word for the Arena in 2020 and that is ugly. So plans are afoot to ‘enhance the customer experience’. This is needed. The 'offer,' as they say, at Manchester Arena is dated so an upgrade is necessary, especially with the elephant in the room – more of that later.

Here’s the deal. ‘New concourse levels would be introduced to enable better circulation throughout the venue, provide additional retail space and introduce a dedicated level for re-imagined VIP boxes and lounges. A dramatic redesign of the main arena would significantly increase standing capacity and provide new food and drink experiences on the event floor. It would take overall capacity to over 24,000, making it the largest indoor arena in Europe.’ The improved Arena would ‘bid to become one of the lowest carbon venues in Europe.'

The facade will also feature honeycombs and worker bees ‘to pay homage to the city’s heritage.’ The bee is becoming such a cliché it’s almost becoming a cliché of a cliché. But on the Manchester Arena it’s justified. It was the Ariana Grande concert bomb in 2017 that raised the bee, then a civic symbol, into a popular one. Through the Mancunian solidarity displayed after the bomb the worker bee is now short-hand for the city across the kingdom.

John Sharkey, Executive Vice President European Operations for ASM Global, said: “(This) represents an ambitious early stage vision for the redevelopment of our internationally-loved venue, created to mark our 25th anniversary year. These plans have been made public earlier than intended, as we are still in the process of consulting with Manchester City Council, our neighbours and landlord on the design – their input and involvement in this journey will be crucial. In particular, we’re working to ensure our final proposals fit with the Council’s wider infrastructure planning. We are also in dialogue with the families of the May 2017 terrorist attack around a fitting memorial for the City Room.” 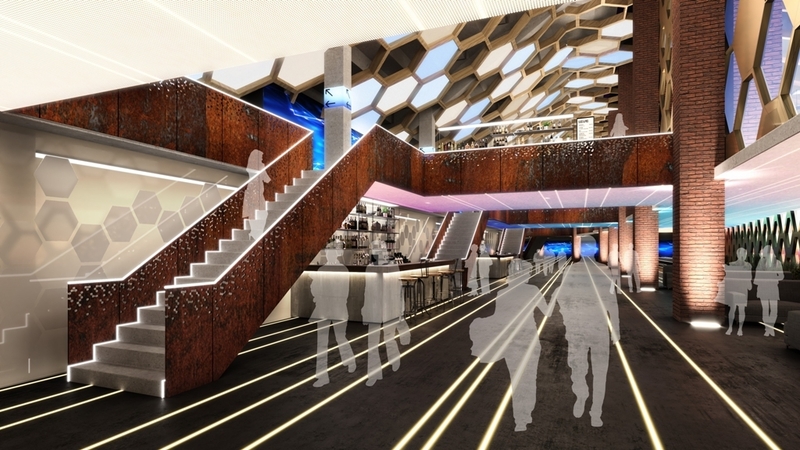 Now for the elephant in the room.

We have to thank developer, Oak View, from the US, for this sudden leap to upgrade the Manchester Arena. Oak View want to open a 23,500 Arena close to the Etihad Stadium in East Manchester which would be the biggest in Europe. Manchester Arena has fought this fiercely on the grounds the city can’t sustain two vast indoor gig venues. Now it's decided to trump the big stats of the proposed arena with a fine piece of one-upmanship and make the city centre alternative bigger again.

Confidential tends to agree that two arenas may be too many and wouldn't want the future of the city centre venue jeopardised or its number of live nights reduced given the amount of cash and footfall the present building brings to central Manchester. Stats reveal that visitors to Manchester Arena spent an estimated £114m in the city centre in 2018, albeit these were gathered by Grant Thornton through a Manchester Arena commission. (One of our contributors, John Blundell, doesn't agree though and even went so far as to propose demolition of the present building.)

Yet, simply because this Manchester Arena revamp has been pushed through quicker than it might otherwise have been is neither here nor there for most of us. This is good old competitive capitalism at work. If the present drab building can be jazzed up and produce a better experience (hopefully ten times better) then that's a result.

And if the CGIs on this page are anything to go by, well, you’ve got to love the wood and the lawn on the Arena roof.

Read - Have you heard about Salford's secret arena?

Manchester Food and Drink Festival 2020 is going ahead
● / Features/Opinion