The pair rejoin TUC to launch Time Out To Help Out, demanding full pay not SSP for workers forced to isolate

People are reluctant to give their details for Track and Trace over fears of loss of income if forced to self-isolate, the Mayors of Liverpool and Manchester claim.

A significant number of people in our region are being asked to self-isolate, with more than 22,000 contacts identified in Greater Manchester so far. Self-isolating if you have been in contact with someone with COVID-19 is crucial in controlling the spread of the virus, protecting others and saving lives.

But it has been suggested that many people are reluctant to provide contact details in case they are asked to take time off work to self-isolate and are unable to work from home. The extent of this financial loss varies depending on circumstances (see box below).

To combat this, Andy Burnham, Mayor of Greater Manchester and Steve Rotheram, Mayor of Liverpool City Region, plus the general secretary of the TUC (Trades Union Congress), have launched a new national campaign called Time Out to Help Out. Its aim is for workers to get paid their full normal wage - rather than just statutory sick pay (SSP) as is now usually the case - if they are requested to self-isolate under the NHS Test and Trace system and are unable to work from home. The campaign is also backed by Unison, GMB, Usdaw, Unite and CWU.

They say that where the employee is receiving SSP, the employer should be able to claim back the difference between SSP and their normal wage from the government. If someone is self-employed, they should be able to claim for loss of earnings up to a maximum daily amount in the same way as people who are required to go on jury service or under the self-employed income support scheme.

Burnham, who has also been vocal about Sunak’s Eat Out to Help Out scheme - saying it doesn’t help those most in need - said: “NHS Test and Trace will never work properly until all employees are supported to follow its requests. It’s right that everybody plays their part in helping to get COVID-19 under control. But what’s not right is forcing some of our workers, many doing the lowest paid jobs or self-employed, to make a choice between self-isolating or face a drastic loss of income.

"That’s why we’re proposing an alternative system that’s currently in place to make sure workers are paid fairly if they are requested to self-isolate.

“Only by ending the pay penalty will we see the national NHS Test and Trace service reach everyone they need to, which is currently standing at 53% in Greater Manchester.”

Rotheram said: “A fully functioning Track and Trace system is our best hope of stopping the spread of the coronavirus and giving people the confidence to go about their lives safely. However, with no guarantee that their incomes will not be hit, millions of people - many who can’t work from home or are self-employed - will be dreading the idea of being asked to self-isolate.

“We cannot beat this virus by asking people to choose between putting food on the table or keeping their communities safe. People should be supported, not penalised, for doing the right thing and isolating at home. As the government are right to want self-isolating to be seen as a national duty. But when performing other national duties like jury service, we do not expect people to be left destitute. This should be no different.”

Frances O’Grady, TUC general secretary, said: "We all want Test and Trace to work. But it's not viable to ask workers to self-isolate if that means they are plunged into financial hardship. Until ministers fix this problem, people will continue to struggle to follow official advice.

"Wherever possible, employers should do the right thing and pay workers their full pay. But the government must also ensure that every worker gets financial support. Too many - including the two million who currently don't qualify for sick pay, or the seven million only getting SSP – will not be able to afford to isolate.”

Lou Cordwell, co-chair of the Greater Manchester Local Enterprise Partnership said: “I’ve been speaking to businesses and they want to do the right thing by their employees. Many of them will be supporting the campaign for a fairer system to pay their staff properly. This health pandemic has devastated a lot of businesses and impacted on jobs and incomes. The business community don’t want to go back to normal; they want to go forward to better and that includes making sure workers are supported when they need to self-isolate.”

The cost of self-isolation

Statutory sick pay of £95.85 per week represents a significant drop in income for those who are entitled to it.

It amounts to just 21% of the median weekly earnings of workers in Greater Manchester and 22% in Liverpool City Region.

To qualify you need to earn an average of £120 a week.

There are at least 90,000 employees in Greater Manchester and 47,000 in Liverpool City Region who do not earn enough to qualify for SSP due to being in low-paid, part-time positions like retail roles, process, plant and machine operatives, cleaners, bar staff and and hospital porters.

The self-employed do not have any income if they are not working and - even if they are able to claim Universal Credit, which depends on individual circumstances - it is likely to be lower than their usual income.

There are 186,000 self-employed in Greater Manchester and 84,000 in Liverpool City Region.

Next: Find out which Liverpool and Manchester venues are taking part in Eat Out to Help Out 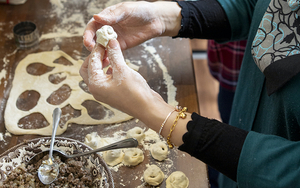