WHAT does it take to make you LOL? Perhaps not as much as you think...

Having decided he didn’t need a specific reason to launch in laughter anymore, Dr Madan Kataria - a physician from Mumbai, India - launched the first laughter club in a park in 1995. Far from laughable, the idea of Laughter Yoga has become quite the phenomenon, with more than 6000 social laughter clubs in around 60 countries to date.

It’s a funny one, but if the video clip of John Cleese’s documentary on its benefits is anything to go by, it does appear to appeal to people.

According to the official Laughter Yoga website, groups use ‘eye contact and childlike playfulness’ which then turns into ‘real and contagious laughter’ because ‘the body cannot differentiate between fake and real laughter’.

They say laughter is the best medicine (10-20 minutes per day ideally) and so even with fake laughter, it’s believed we can achieve some physiological and psychological benefits.

There are already 56 laughter clubs in the UK (you can find your closest club here), but with World Laughter Day taking place on Sunday 6 May, it’s proved to be the perfect opportunity to introduce Laughter Yoga to any misery guts in Manchester city centre.

Laughter Yoga will take place at Cafe Blend in the Triangle Shopping Centre on Sunday 6 May. They suggest you go along 'to prepare for the Uk National Laughter Festival and Championships on 17-24 June.'

Or you could just go for a laugh. 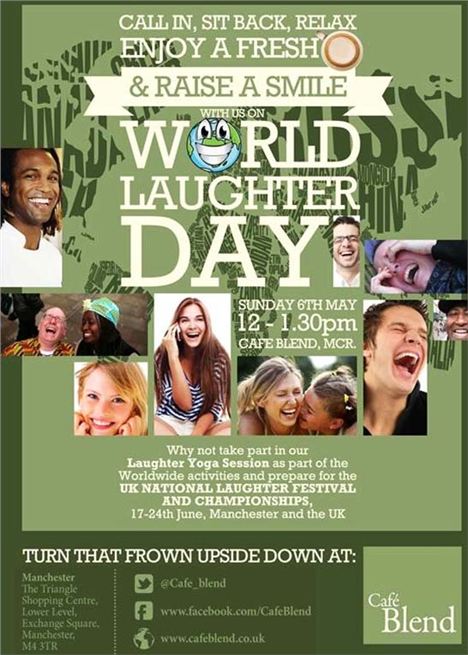