THE Thunder Girls is a rip-roaring new show based on the novel of the same name by Melanie Blake. After building a multi-million-pound talent agency, Melanie decided to fulfil her lifelong ambition to write. Inspired by many of her own experiences managing touring bands, The Thunder Girls explores the friendship of the eighties pop sensation of the same name, and all the fun, fiasco and frustration leading up to their impending reunion tour, 30 years after they first found fame. Some of the band members want nostalgia, others crave the kudos - and they could all do with the money.

Can this complex and diverse group of women overcome the differences and disagreements that broke them up in the first place? After the book was adapted for the stage, Melanie was keen to find a female director to tell her story. With a flair for Shakespeare, drama in the blood (yes, she’s one of THOSE Branaghs) and a passion for representing real women on stage, Joyce Branagh was the ideal candidate.

Why do women become less visible on our stages, televisions and film screens once we hit our forties?

“I’m always looking for female-led drama. That’s my thing, just to sort of redress the balance a bit. I think sometimes people are a bit snobby in theatre and they ask: is it challenging? Is it educational? All of those things are brilliant, but it doesn’t all have to be like that, and this is entertainment. It’s got soapy elements, it’s got pop elements, it’s kind of Dynasty meets Dinner Ladies,” she told us.

It’s rare to have an all-female over-40 cast, writer, director and producer team in theatre. Traditionally, older women on stage have played the role of crone/hag/busybody/mother-in-law, a supporting role that facilitates the journey of other characters. The Thunder Girls puts these complicated, gritty, fabulous women - who’ve lived a life and have all the scars to prove it - front and centre.

“Melanie, she’s a bloody force of nature and she’s so passionate about this project because she’s had it in her head since she was about 25,” says Joyce. “A few people said ‘oh no that will never work, it’s got older women in it, why don’t you make them younger?’ and she said ‘no, I’m not going to do that, that’s not what it’s about’.”

Despite many reckoning that the book and show didn’t have an audience, the box-office takings say different. Says Joyce: “A lot of people who have booked for this show are first-time theatre-goers, and I think it’s because we’ve got recognisable people - we’ve got Beverley Callard, Coleen Nolan, Carol Harrison and Sandra Marvin. That familiarity entices some people in, if I know that we’ve got some people who’ve never set foot in a theatre before, you want to say come back there’s loads of great stuff, and you might not like everything, that’s fine, but don’t for one minute think theatre isn’t for you.”

There is also a sense of security in seeing characters that you recognise, Joyce says. “You want to see people who look a bit like you or a bit your age, who’ve got the same problems. We’re all getting older, and some people are wondering what they’re doing in their lives, what they’re doing with their husbands, partners or, if they haven’t got one, what are they doing struggling as single parents or struggling because they haven’t had a kid, all of those things that I think everyone can relate to if you’re over 40, because we all worry about getting older and if they’re women who are in the public eye they’ve got that times 10.”

Although the tides are shifting, with many recent female-driven campaigns raising awareness of this issue, we have to continue to ask why do women become less visible on our stages, televisions and film screens once they hit their forties?

“It’s shit, isn’t it?” says Joyce. “If I knew why, I’d try and rectify it. We’re quite obsessed with youth and beauty as a culture. The drama that’s been written for actresses has been the beautiful woman, quite often alongside the man who’s doing the more interesting stuff, so as people in the public eye get older, they lose their currency, because their only currency before was their beauty.

“We need to be writing stories about interesting people and their stories. It’s not about the fact that they’re beautiful and it’s not a male story with some women dotted in. It doesn’t happen to men in the same way. They’re in their fifties and sixties and they’re still getting leading roles, and it doesn’t matter if they look like the back end of a bus (because it shouldn’t), and that’s fine but we want a bit of that as well.” 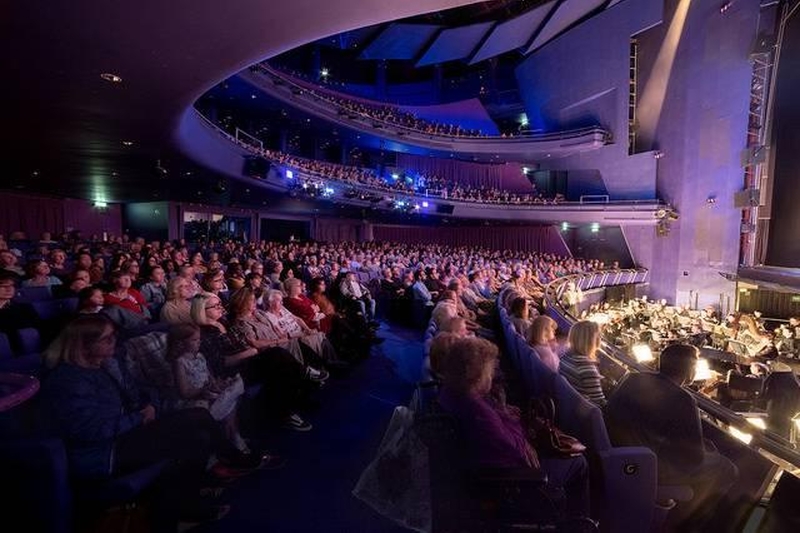 It’s a similar story behind the scenes, with Stage Directors UK recently reporting that there is a 70:30% male to female split. If those figures were for directors over 40, the ratio would widen further. Only a fifth of artistic directors in our theatres are female. How can we ever expect theatrical content to be representative on stage with such dire gender bias behind the scenes? Part of the problem is the language that is used; men in the creative arts are often described as having an artistic temperament or being a perfectionist, while women are called difficult or demanding – it’s time to redress the imbalance. Women are more than capable of telling their own stories, says Joyce: “I’m glad I’m doing this and I do bring a female over-40 perspective to it, but I don’t want to not be able to direct an all-male drama just because I’ve got lumpy bits on the front.”

The Thunder Girls has already sold out its run at The Lowry, proving that there is an audience for authentic northern, working-class, female-led stories. “It’s grab a mate of your choice and come have a couple of bevvies – watch some girls be slightly bitchy and naughty to each other and I don’t think I’m spoiling it if I say it has a feel good ending. It feels like it will resonate with people.”

The Thunder Girls is at The Lowry until Saturday 28th September

Been there, got the mug: 12 alternatives to Manchester's Xmas Markets
What you say
Read Next
● / Theatre & Comedy