I like the scale of the scheme, the jagged roof line and its interesting nooks and crannies of private terraces and communal gardens.

It felt, for once, big enough to live in. Properly live in. For a long time.

I like the new front doors on Vesta Street, the mix of houses and apartments, and the inner street where neighbours will meet.

I applaud the fact that they have made the extra effort with the detailed brickwork and the symmetry of windows, and thought about the practicalities of parking and bins and security.

Good too that the second phase is likely to be almost a mirror image on the other side of the canal, giving some uniformity and cohesion to this unconnected area.

It is anticipated that the first residents will move in this month. Of the 46 properties in total 13 are left for sale – six one-bed apartments, one two-bed apartment, and six townhouses. 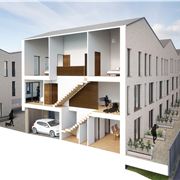 Interestingly the two large four-bedroom houses both went early on, both to families – one already living in the city and looking for more space, another moving in from the southern suburbs in a reversal of the norm.

Hollie Reynolds is sales and marketing manager for ISIS Waterside Regeneration, the company behind the entire Islington Wharf project.

(She is also sales and marketing manager with Muse Developments which jointly owns ISIS with the Canal and River Trust – British Waterways as was. Hence her shuttle between New Islington and Vimto Gardens on Chapel Street, Salford.)

She is very happy at how IWM has been received and the faith buyers had, many putting their money down when there was little to see but scaffolding and mud.

There is now a quirky show unit – a three-bed mews house with its own front door on Mill Street – that they could have sold ten times over but it will remain as the sales centre for phase two. 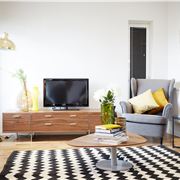 She said: “We found a real pent-up demand from people who had been renting, many in the New Islington area, who were ready to buy. They like the area and want to invest here.

“It has the benefit of being close to the city and good transport. The arrival of the tram made a big difference. It has its own park and the canals add a Castlefield dimension.

“There is a real mix of people as well and it’s lovely to know that we have given families a city living option.”

They are not fitting out any of the other townhouses as show homes but you can walk round the shell of the end one closest to the original lock keepers cottage to get an idea of the space.

There’s two ways in. On foot through gates at one end of the inner courtyard or by car into the courtyard off Vesta Street and into your garage.

All the townhouses have three beds and a deck out over the canal, but there is a choice of two internal layouts.

Version one has the kitchen on the ground floor with direct access onto the decked area, along with a loo and various storage cupboards. The third bedroom is on the first floor.

While in version two the ground floor is earmarked as a bedroom/study with the kitchen on the first floor.

In both, the living room is vast, more than 27 ft long. On the top floor, the roof design means incredibly high ceilings, making the bedroom space seem even bigger. The master has an en-suite shower and a wall full of wardrobes and there’s a house bathroom up there for the second bed.

Loads of windows in this unit make it incredibly bright. (The inner houses will obviously lose the side windows but still the end windows are good compared to other schemes.) And a skylight above the stairs casts interesting light. 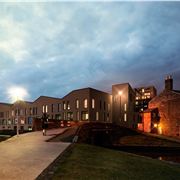 It feels solid with the wooden staircase, good flooring and decent doors – all important details that stand out when there is no furniture or art to divert the eye.

And another plus – the walls are neither harsh white or sickly magnolia but a soft grey.

And they will be cheap to run. Built to Code Level 4, heating is from a Nibi air source heat pump which is incredibly efficient.

At 1200 sq ft with about 132 sq ft of outside terrace it felt, for once, big enough to live in. Properly live in. For a long time.

The arrival of the Mews residents will give a timely bolster to the area.

It already has a handful of successful independent businesses such as the lovely Vivid in the base of Islington Wharf and it’s surely only a matter of time before the bigger unit next door gets taken.