Holy smoke: Quarter House does BBQ food but not as you know it

We speak to Jason Latham, the head chef who's playing with fire on Stevenson Square

THINK barbecue food and you think of big chunks of meat in even bigger chunks of bread, eaten with your fingers, sauce smeared on your chin and dripping onto your jeans.

While there'll always be a place in our hearts for that kind of eating, it's not what we found at world barbecue restaurant Quarter House on Stevenson Square.

We imagined a cross between Red Hot World Buffet and Reds Barbecue; a place aimed at guys with massive appetites who get more excited by quantity than quality.

Instead we found a head chef whose style of BBQ cooking has evolved over time into something much more delicate and refined: two words you'd never normally associate with the primal pleasure of meat cooked over fire.

Jason Latham is a competition-winning barbecue chef whose first taste of cooking over charcoal was at US-inspired Solita. He went on to open American BBQ joint Manchester Smokehouse before heading up the kitchen team at Quarter House.

So if you're worried that you won't get the archetypal Deep South-style barbecue at Quarter House, you needn't be. It's just that the US isn't the only country represented here.

Says Jason, “All countries cook with fire but just in different ways. We do barbecue from all over the world: Thai, Mexican, Korean, Australian, as well as the classic American stuff.

“For instance, on Sundays we hang the meat above the fire and cook it for twelve hours on an Argentinian rack. Nobody does a Sunday Roast like that in the North West to my knowledge.”

But what is it about barbecue cooking that got him hooked?

He says, “I like the process - that's what fascinates me. The process of how smoke cooks rather than a direct heat. Smoke makes everything taste better, in my opinion.

Quarter House adopts many different cooking techniques and different cuisines, but they're all united by the common love of cooking over fire. The result is a menu that's exhilarating in its variety and range, yet is still clearly all the work of one chef. A chef with a vision of how good barbecue food can be.

The quality is evident in the carefully considered accompaniments for each dish (see the descriptions below for more on this), and in the provenance of the produce, which is all sourced in the UK, and often from specific farmers. For example, pork from Quiet Waters Farm in Devon, and free-range chicken and eggs from a small Cheshire farm.

Says Jason, “We don't get any imported stuff. It might be half the price but it's not our ethos at all. It's definitely the higher quality meats we go for.”

Jason cooked up a table full of food for us, thinking that as two, small lasses, we'd probably only eat about half of it. How wrong he was.

We devoured it all. Because, in short, the food here is superb. From the small plates to the homemade desserts with all the sides and mains in between, this was an incredible experience.

Quarter House doesn't just do good barbecue food, it does good food full stop. Next time someone asks for a restaurant recommendation, we'll be sending them here. 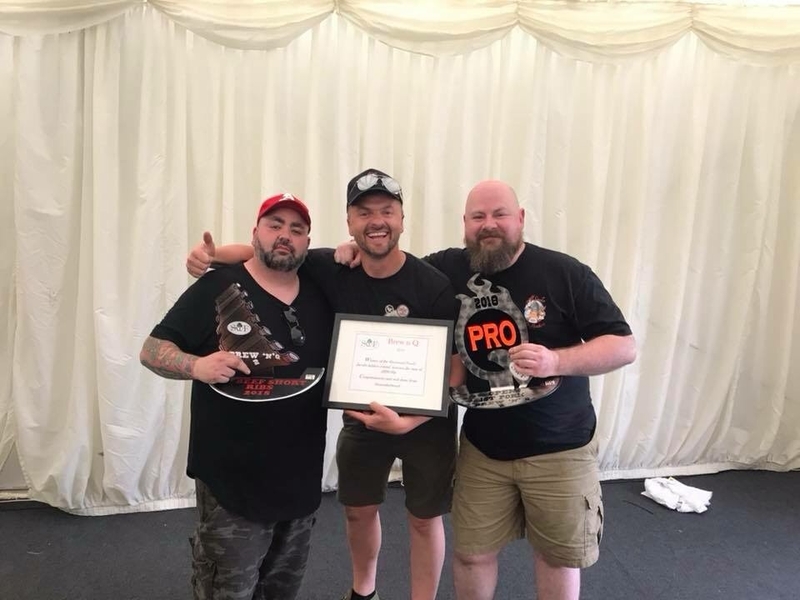 An instant umami hit – this is a signature dish and a very satisfying start to a meal. The parcels are crunchy on the outside with a soft, chewy inside that you can properly get your teeth into. They're served with beef-dripping mayonnaise, pretty pink pickled onion, and a parsley salad. 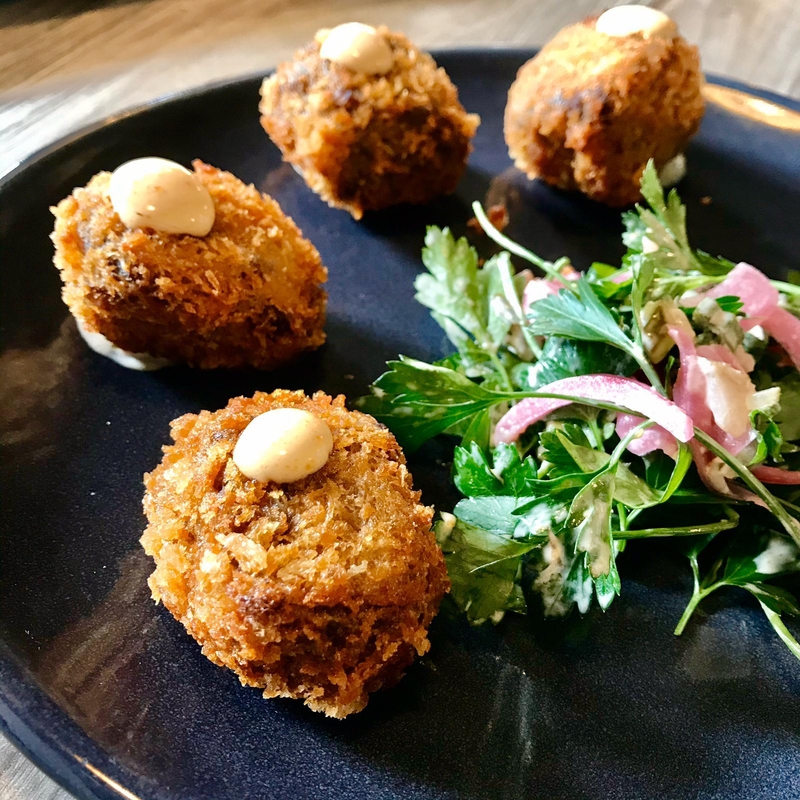 A Japanese-styled dish that looks refined and elegant but packs a punch in flavour. The sticky, citrus and herb-marinated pork, smoked over cherry wood, is sweet and soft to the bite. And the burnt sour apple puree and pickled ginger cuts through the fat nicely 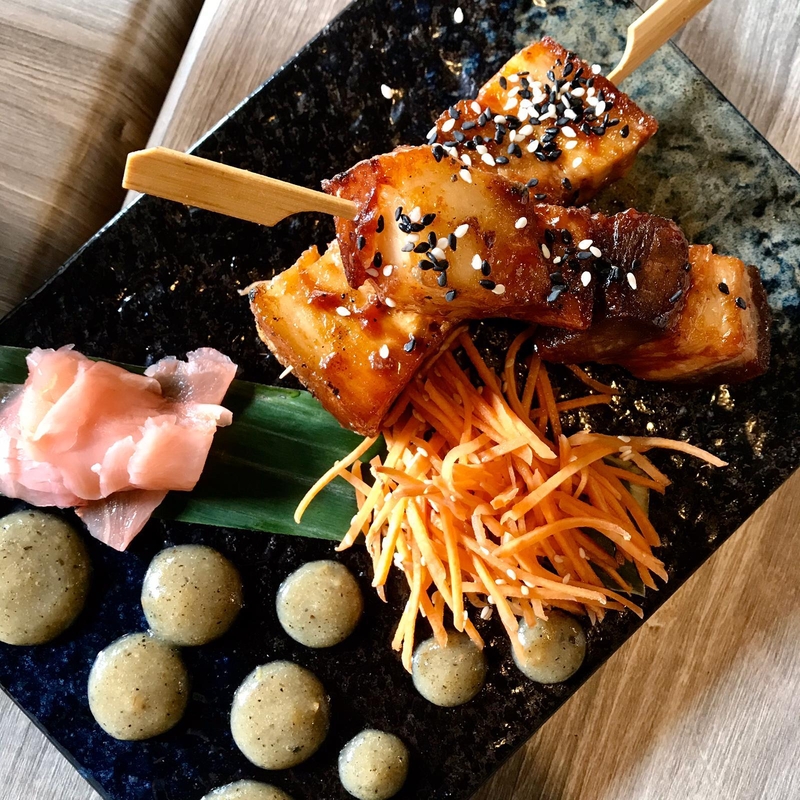 Imagine chips with curry sauce but done by a fine-dining restaurant rather than your local chippy. The fries are hidden under shawarma chicken, fresh coriander and chilli, spring onion, and coriander. You could eat just this and still leave feeling full and happy. 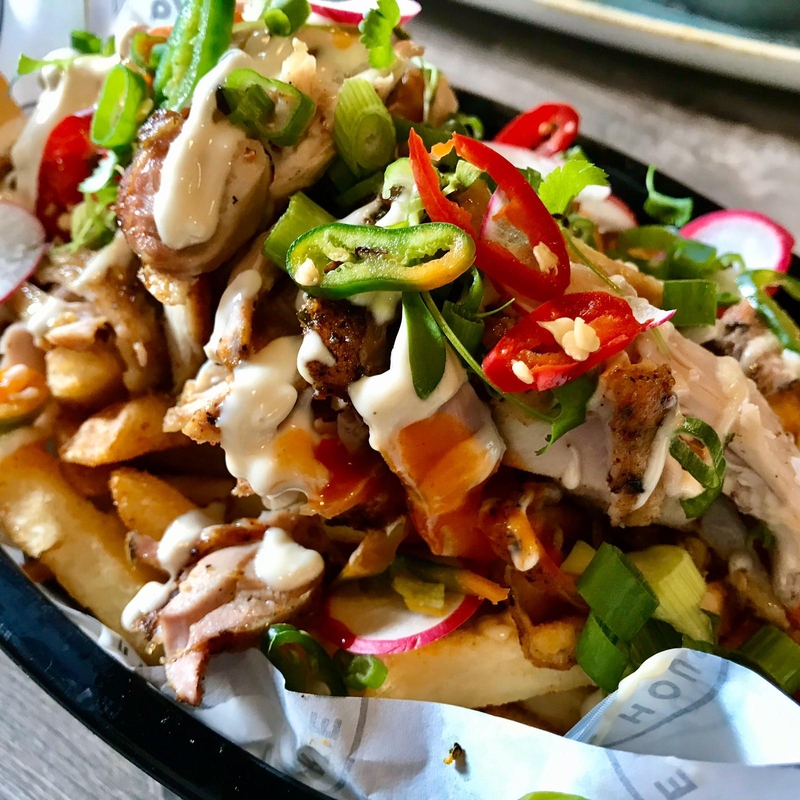 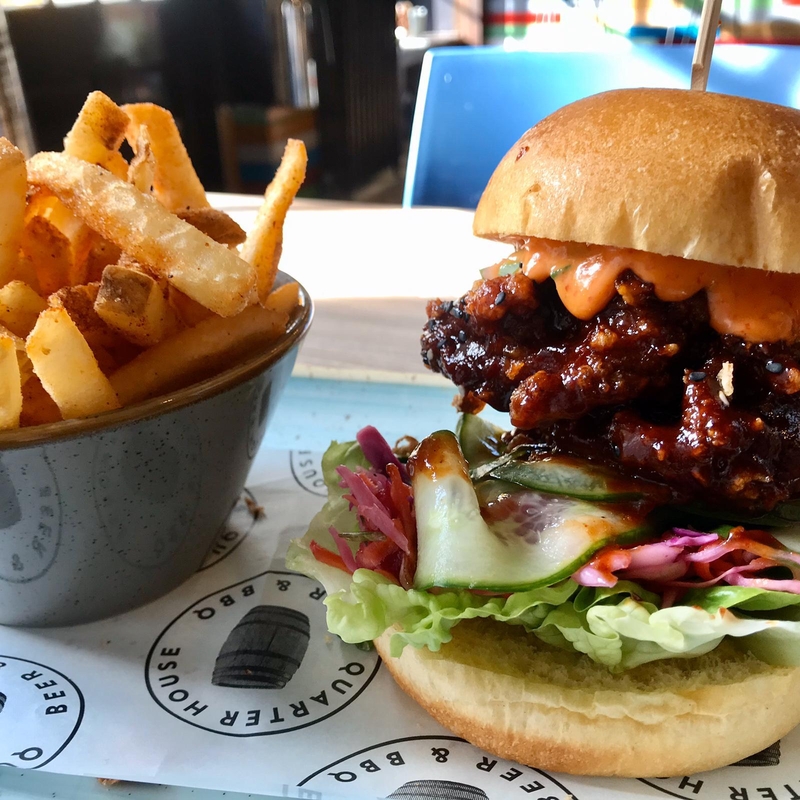 A vegan option that was just as lively as the rest of the menu. Crunchy tostados topped with a taste mountain of smoky sweet potato, chipotle and almond salsa, and sprinkled with charred sweetcorn, sweet beetroot, spring onion, toasted almonds, and more. Whole-food heaven. 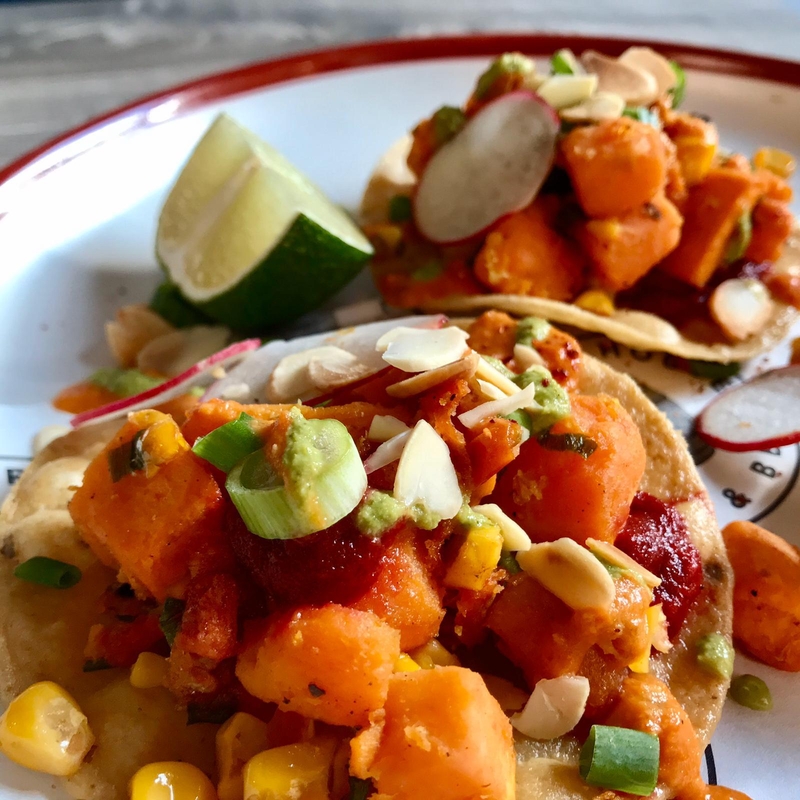 A beautiful mix of Al Pastor pork belly, zingy lime and sweet pineapple on a soft corn taco. It's a Mexican classic and they do it really well. It'd be great as a snack with beers or cocktails. All the dishes were great but this was possibly our favourite.

This home-made pudding won us over before we even got to the brownie in the middle. The fresh raspberry compote and sorbet sitting on a mound of crumble was a dessert in its own right. The brownie itself was warm and gooey with chunks of melting chocolate inside. Apart from the sorbet, it was all made in-house. Who knew a barbecue chef would be so good at desserts? 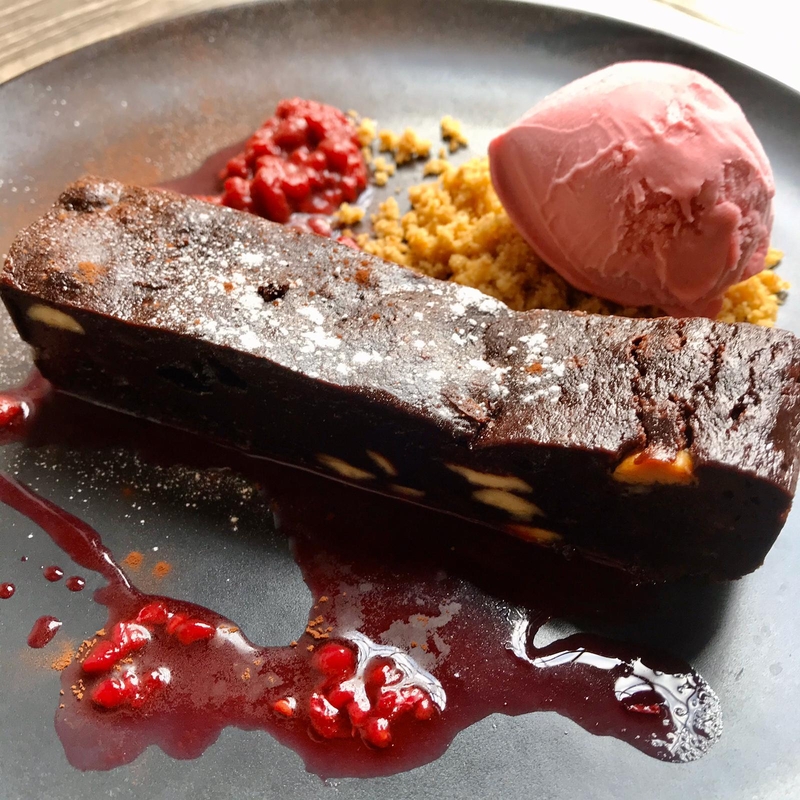 Another homemade dessert – a creamy, textured, and delicately flavoured ricotta cheesecake, served with bourbon glazed charred peaches. We were full-to-bursting by this point but it was impossible to leave alone. 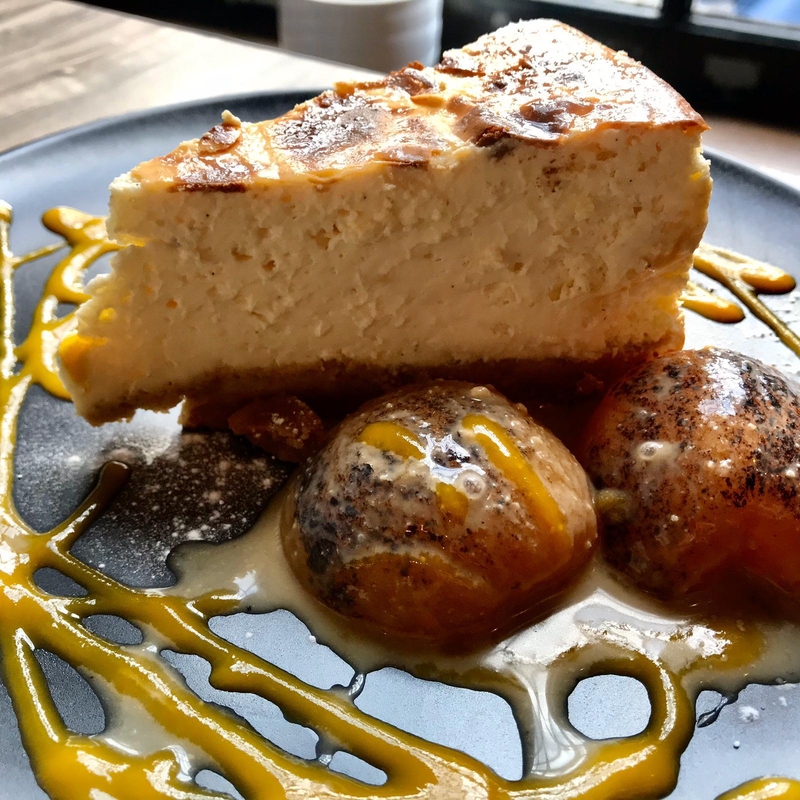