Call the police, Jonathan Schofield has a poor meal at the most consistent restaurant group in the UK

It feels like I’m breaking an unwritten reviewing law to state this, so pause, gulp, deep breath, here goes: I had a poor meal at a Hawksmoor restaurant.

It’s hard to excuse the issues as teething problems, the restaurant has been open since November.

I know, I know, apostasy, heresy. I feel guilty writing that because in the twenty times or so I’ve eaten in Hawksmoor outlets I’ve always had exceptional meals, exceptional service and the atmosphere has been alive. That elevated level of experience matches the bill, but you don’t mind paying it as the occasion feels so confident, assured and good value.

In the beautiful and recently-opened Liverpool restaurant things fell apart. More of that later.

It all started so well.

Surely India Buildings is the most impressive host in the Hawksmoor group although I've not visited the New York, Dublin or Edinburgh restaurants yet? The vast structure was completed in 1930 for shipping firm The Blue Funnel Line and occupies a whole city block. It looks straight out of Chicago.

The architects were Arnold Thornely (also Port of Liverpool building, one of the Three Graces, down the road) and Herbert J Rowse (Liverpool Philharmonic Hall and other city classics). The assessor was Giles Gilbert Scott (Liverpool Anglican Cathedral). With that pedigree the architecture couldn't fail and didn’t.

The restaurant occupies a corner unit on Brunswick Street and Fenwick Street that was formerly let to Lloyd’s Bank. The polygonal bar area lined with travertine is impressive, the ceiling bears what look like signs of the zodiac, the Art Deco lamp is perfect for 1930.

The main dining room (main picture above) is more subdued than the bar but is very spacious giving diners lots of room. It's decked out in the darkly muted tones that are a Hawksmoor staple. It feels comfortable, clever and assurred.

On to the food. The starter of beetroot salad (£8.50) was big and bold under its cap of greenery. The individual beetroots were gobstopper sized with proper bite, excellent sweetness mingled with rich earthiness. The bone marrow with onions plus sourdough toast (£9.50) is a Hawksmoor classic. This dish remains a classic in Liverpool. The savoury, buttery, creamy bone marrow works a treat with the sharpness of the onions. It’s good to slam it on the sourdough and wolf it down.

So far so good.

The impressive stairs to the Hawksmoor loos in Liverpool has a grand notice leaping from the wall stating ‘Beef and Liberty’.

Forget Veganuary, this was Beefanuary. That was the problem. Our main event, the Chateaubriand for two (£87) arrived with beef dripping fries (£4), spinach, lemon and garlic (£6.5) along with two sauces at £3, anchovy hollandaise and peppercorn.

A Chateaubriand is best served medium rare, so I asked for it medium rare. It came more medium than rare which would have been just about acceptable if it hadn’t been lukewarm going on cold. The skillet the steak had arrived in was cold too which clearly didn't help. There was just a tiny flicker of dying ember heat at its base.

We pointed out our chill meat to the staff. There was a moment of fuss and mini-panic but, to be fair, the staff couldn’t have been more apologetic. The meat was whisked away. It was quickly whisked back, the same dish of meat not a fresh one, at a good temperature now but more medium than ever.

I suppose by usual restaurant etiquette the Chateabriand should have been prepared fresh again to make sure it was medium rare but I'm pleased that wasn't the case here. That would have been a dreadful waste of good beef. We've moved on and perhaps those days are gone, although I’m sure the reataurant could have reused the meat in other ways.

The good news is that Hawksmoor knows how to source its British beef. Warmed up as it was the meat was typically moist and tender; it was steak for which the phrase melt in the mouth was invented.

The sides weren't up to scratch. The beef dripping fries were overcooked. Yes, fries aren't fat luscious chips but they shouldn’t be this bony and sharp; whalers could have used these fries as harpoon tips to penetrate blubber. The spinach, lemon and garlic burned with too much salt. This was the case with the first set of sides and the second set of sides we got as identical replacement sides for the reheated Chateaubriand. We got two average anchovy hollandaises and two peppercorn sauces as well.

There was a really strange finale.

I’ve written the whole menu description because that doesn’t read very much like a Hawksmoor ‘plain English’ menu item. The next dessert down on the menu is sticky toffee pudding, the one after that is plum cheesecake.

The Chocolate Anglaise was muddled, full of unpleasant bitty crunch and any sweetness was sickly. It seemed over-engineered, a bit insane.

Starters aside, this was a real mixed bag of an experience.

Ok, the Chateaubriand issue was more or less sorted but it costs £87 and you have to expect the restaurant to take a great deal of care with it. This might have been a meal for a couple who can only afford one splash-out a year and it isn't a complicated dish. Mistakes happen, but there were also mistakes with the sides and I have no idea what was going on with that dessert.

Service from staff was enthusiastic, everybody really wanted to help but it was a bit overly-friendly, almost slapstick.

Anybody who has been to a Hawksmoor restaurant knows the staff training is all about creating an easy-going atmosphere with the casual dress code and the easy smiles while providing an exemplar of efficiency, knowledge and confidence. To get that right is difficult. Liverpool Hawksmoor is overplaying the informality and need to calm it down. A meal costing £216.10 requires a tad more formality.

These issues require attention in Liverpool Hawksmoor. It’s hard to excuse them as teething problems, the restaurant has been open since November. What was absent on our review visit was the famed consistency of one of Europe's best restaurant groups. The balance, as yet, isn't right. 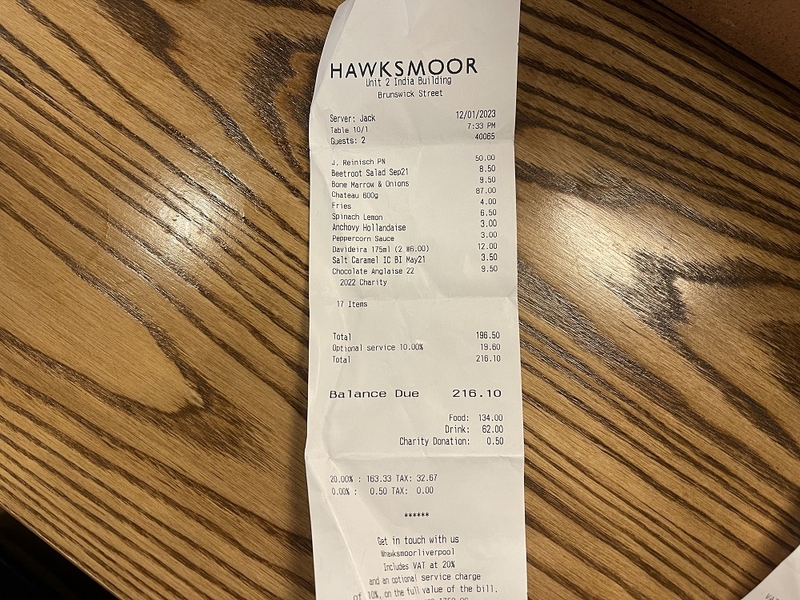 ‘A crisis of identity’ - George’s Dining Room, Worsley, reviewed
What you say
Previous Article Next Article
Read Next
● / News & Comment