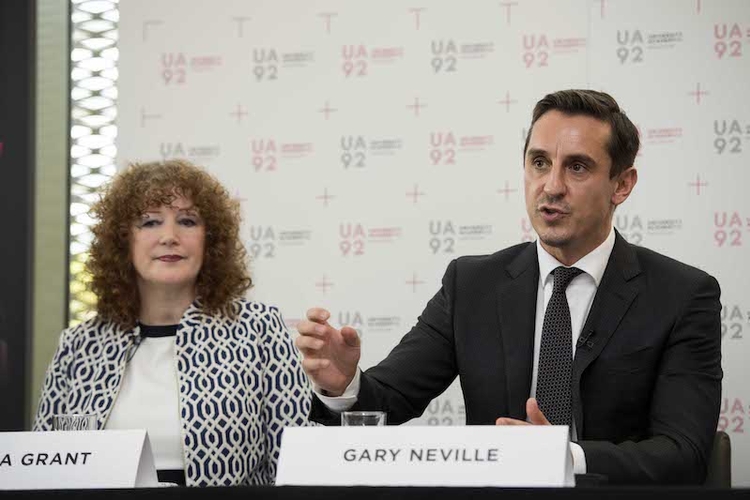 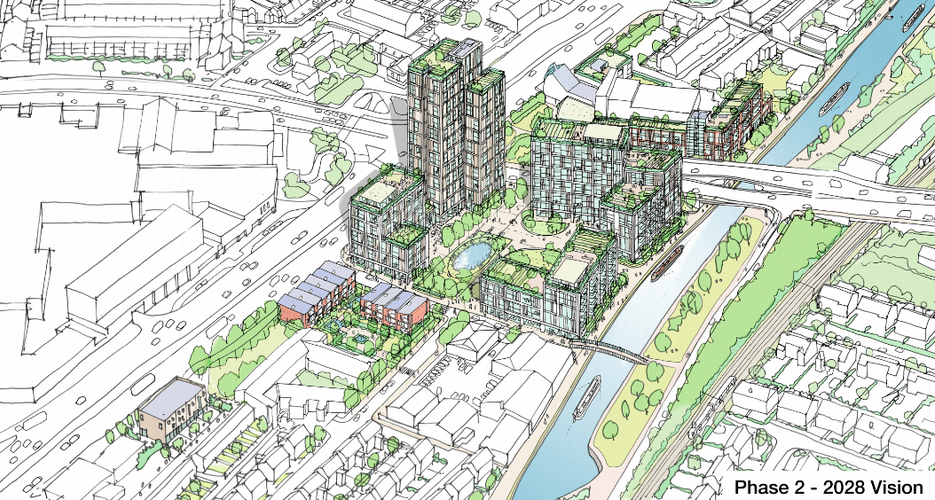 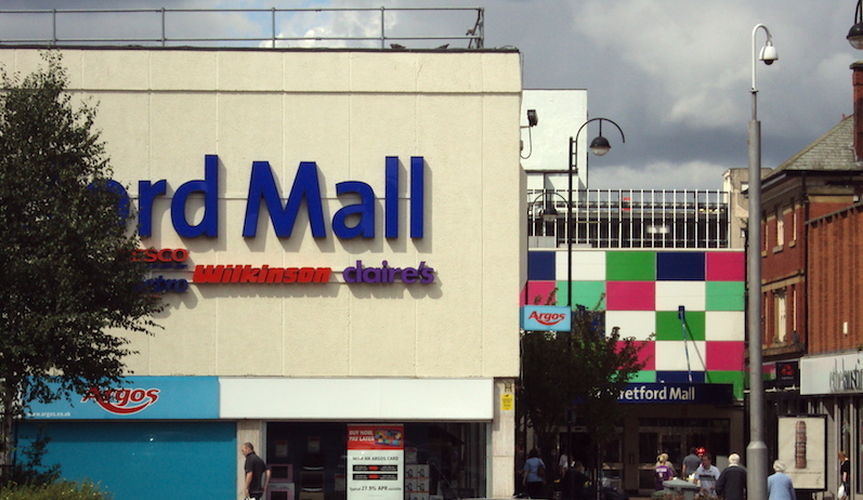 Trafford Council approved the proposals in a vote on Monday 29 January 2018.

Town planners really hated Stretford town centre in the 1960s. So they plotted against it.

They took a dignified Lancashire town, placed its still living body on a slab and cut into it like a corpse in a morgue. They dismembered Stretford, separating the splendid public hall from the splendid cinema and then severing both from the pleasant shops and market.

They then demolished the old high street and replaced it, in the year of the moon-landing, with the monolithic Arndale (later Stretford) Mall. This was a snazzy design internally but an inward-looking disaster long-term.

I moved to Old Trafford in 1992 and I recall thinking how Stretford wasn’t a town, just a series of dual carriageways and grim subways leading to places that were either closed down or looked likely to close down. It was so bad you thought something had to happen to improve matters. But nothing did.

In fact it got worse.

The beautiful and already closed Essoldo cinema carried on crumbling, the Public Hall was damaged and then shut by the local authority, the market in the Arndale emptied of traders, while the mall itself seemed to exist in a never-never land where its only ambition was to perfectly embody the word ‘depressing’. Even McDonalds fled.

But now, at last, come the doves of hope wearing the familiar features of Gary Neville and the famous Manchester United 'Class of '92': Gary's brother Phil, Ryan Giggs, Nicky Butt and Paul Scholes.

Up the road in Old Trafford, next to Lancashire County Cricket Club (LCCC), the indefatigable Neville and Co want to develop a university, with the aid of Lancaster University. This will be called 'UA92' (or University Academy ’92), after the boys themselves.

UA92 will ultimately cater for 6,500 students, with a programme providing qualifications in business, sport and media. The intention is to welcome the first students in September 2019,

Manchester developer Bruntwood plus Microsoft and Trafford College will be along for the ride. United and LCCC support the idea. There will be a hotel too and sports facilities at Gorse Hill Park and Turn Moss, between Stretford Grammar School and the River Mersey.

Gary Neville has some interesting thoughts on the nature of UA92. He’s said: “The initial idea was thinking about how we can instil our football principles and values into as many people as possible at a young age. We were at United from the age of 16-21 but in our pre-first team days, we were taught more than football. We were prepared for what came our way in professional football and into our thirties, prepared for life.

"The idea that you go to learn a skill at university and not the character development - personality traits, leadership, being able to self-analyse - it just did not feel that that was what an academic provision was. We wanted to try and do something that would be different.”

Good on him. Good on the lot of them for putting so much money into Greater Manchester rather than retreating into retirement in Dubai or deepest Cheshire.

The good news is the old town centre of Stretford will also get a slice of the pie. 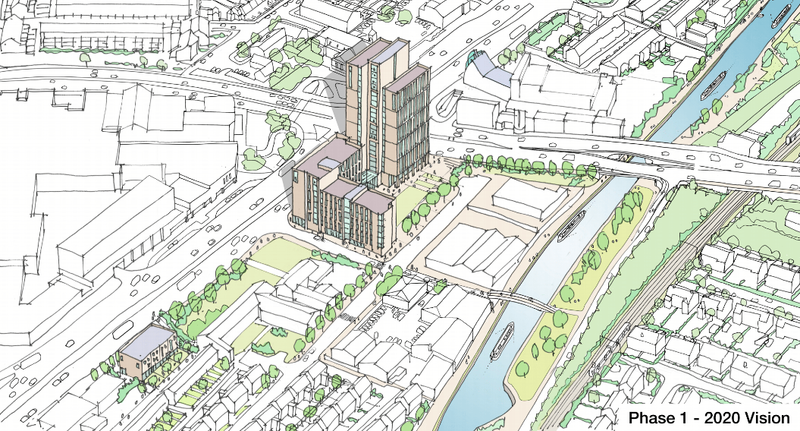 Over Chester Road from Stretford Mall, will be UA92’s student accommodation. There will be room for around 1,700 young people, sited on land mostly occupied by a surface car park and presently containing all the interest of…well…a surface car park. There will be a landmark 20-storey tower at the junction of Chester Road and Edge Lane and then smaller buildings clumped round a small park. The Essoldo cinema site will get a booster with a proposal to save the exciting 1930s façade and turn the rest into a student union and an entertainment centre.

So hurrah, a blast of new lively blood for Stretford town centre, major positive economic activity at last, after decades of piled on decades decline.

So what have some locals done?

They’ve launched an online petition against the proposals. Of course they have. This is the age of internet rage after all.

But let’s go further. Next, demolish Stretford Mall and put back King Street

‘Plans are afoot to erect a 1,700 person student village on a small area in Stretford. The development will focus around four blocks, up to 20 storeys tall but will also take in local landmarks. The Essoldo will be CPO'd for use as a Student's Union and a large block near the local tram stop will also be CPO'd to extend accommodation. The students will be sharing our public services - the local leisure centre and library, though there are plans for improvements of said facilities.

‘As a community we vote no.

‘We feel the incumbent population will completely unbalance the amazing diversity we enjoy in Stretford and mean that all future commerce is geared towards a very distinct set of needs that don't reflect the rest of the population. We worry that the roads and services will be overloaded and will not be sufficiently improved to accommodate the increase in users. We worry that the houses in the local area will become student housing. But most of all we feel that the student village will destroy the tight and active community feel that Stretford currently enjoys.’

829 people in the first six days supported the petition. Meanwhile on the Stretford community Facebook page, there's comments such as: ‘I didn't move here with my family in order to live next to (this). More rubbish, more strain on the infrastructure, more traffic, higher crime rates, insurance goes up.’

So forget the economic benefit, greater street activity (and therefore security) and the cascading improvements the development might bring, and instead accuse students of generating crime. Very odd. Very nasty. To be fair, many on the Facebook page find the proposals appealing, so there's a proper ding-dong going on.

The Council Leader of Trafford, Sean Anstee, told Confidential: “For a number of years, the Council has been lobbied to see significant investment in Stretford and Old Trafford and bring forward proposals that both build on existing great communities and enhance the local economy.

"The proposal will add £26m per year to the local Trafford economy, helping to create jobs and build on the thriving community here in Stretford and Old Trafford. Of course there will be a public consultation phase of the project in partnership with the local community. But in my view it presents a fantastic opportunity to revitalise and support our local communities. It will create jobs and attract 6,500 students to the borough by 2028.”

You could almost hear Mr Anstee scratching his head as he sent us this message. Confidential finds the whole thing bewildering too. Stretford, as a functioning town centre, has been a sinkhole for so many years. Supporting these proposals seems a no-brainer. Effectively, what’s not to like?

Support should be conditional on a couple of elements, of course. Should the university fail there must be no cash hit on Trafford Council and its residents. Also, the designs for the new buildings and public areas must be ambitious. The worry is that given the utter dross Trafford Council allowed to be built on Pomona Island, they will allow the same to happen here. Let’s hope Neville and the boys' pride prevents this.

At Confidential we reckon there might come a time for a UA92 petition but it’s not now. We say build the university, build the student accommodation.

Already there are signs the area is on the move. The horrible subways have gone, a group of wonderfully public-spirited community members are trying to get the Public Hall working. These proposals greatly build on those initiatives.

But let’s go further. Next, demolish Stretford Mall and put back King Street (the original high street of Stretford that ran through the mall site) as a proper street with bars. Then sell the rest of the mall site off as residential for families.

Such demolition, of course, might, at present, be a dream. But mall or no mall, surely the creation of a new university and the arrival of more than a thousand students over the road can only improve the life of Stretford town centre? Because, let's face it, there’s not much that could make it worse.