From the Titanic to Bestie – Our Belfast Top Ten

Neil Sowerby follows many trails across this vibrant, re-born city

THERE’S only one way to start a weekend in Belfast – with a stout in the iconic Crown Liquor Saloon. It’s opposite the famously much-bombed Europa Hotel and the Grand Opera House.The last time we visited this gloriously ornate pub we ended up sharing a booth with the road crew from Opera North, refreshing themselves substantially after erecting the La Traviata set. Leased by the National Trust to a pub group, it ought to feel preserved in aspic. Not the case. It’s a roaring hoot. If the dark stuff is not for you, check out real ales from local microbrewery Whitewater.

A music trail around the Cathedral Quarter

GOT the taste for a pub crawl? Just a 15 minute walk from the Crown, don’t miss the chance to explore the bar-packed, cobbled lanes of the Cathedral Quarter. Extra value comes from  booking a place on the Belfast Traditional Music Trail. Two professional folk musicians guide you between three stops – live music venue Dirty Onion, a private room in the legendary Duke of York, and finally McHugh’s, one of Belfast’s oldest buildings. At each you will be treated to your own personal ‘session’ of tunes and tales, tracing Ireland’s vibrant musical tradition. We got veteran flute whizz Davy and uilleann pipe prodigy Connor, who provided a beguiling couple of hours’ entertainment. Afterwards we popped back to Commercial Court where, just along from the Duke of York we paid homage to one of the island’s great rock heroes, the late Rory Gallagher, immortalised in a mural alongside other iconic Irishmen, including Seamus Heaney. 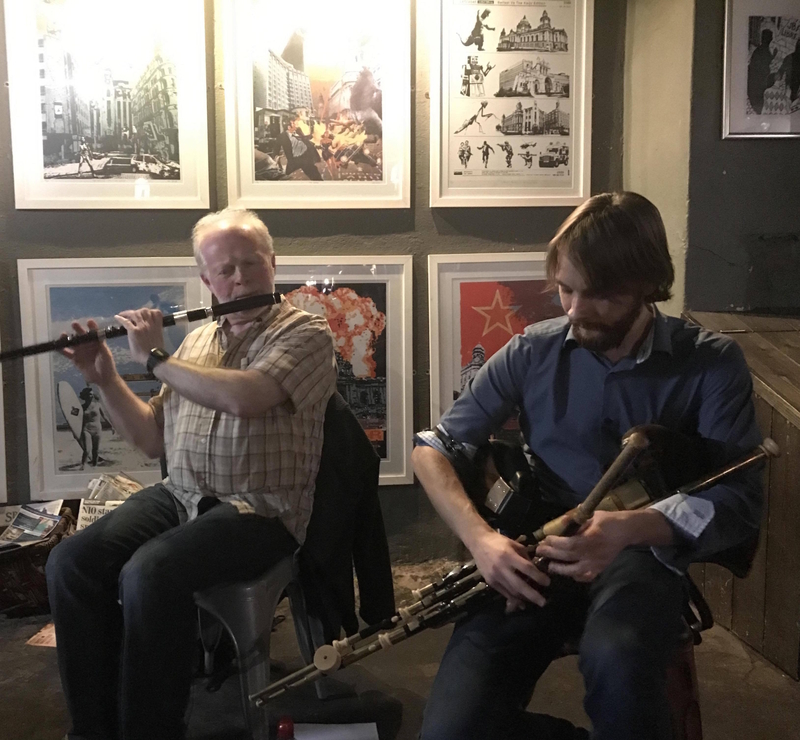 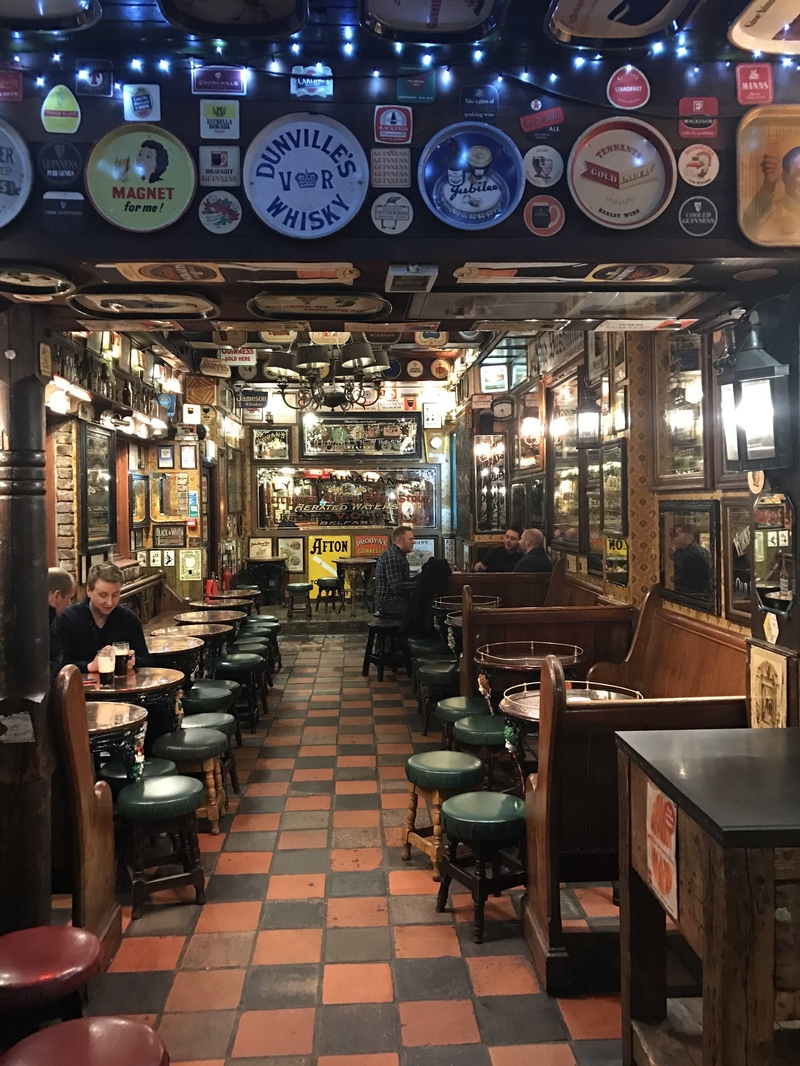 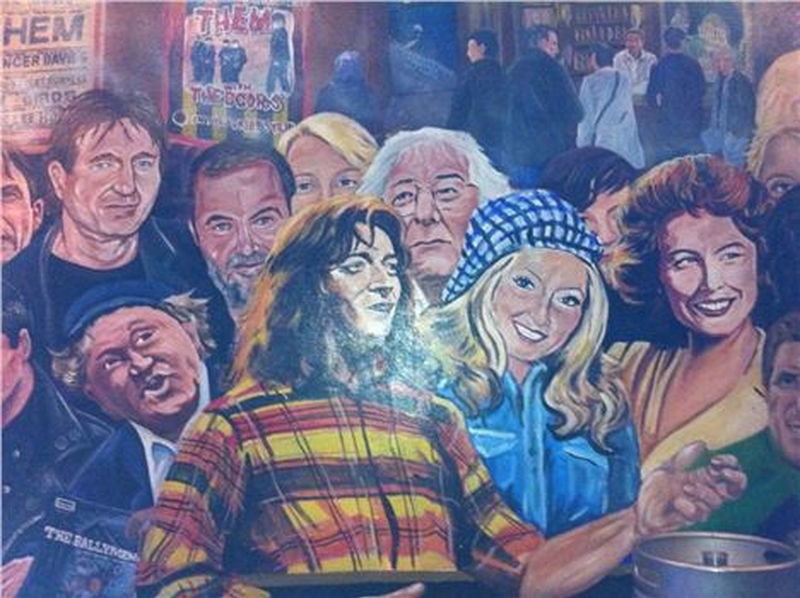 The Muddlers Club – a star is born

WHILE Stephen Toman’s MIchelin-starred The Ox still defines cutting edge cuisine in the city, young pretenders are on its tail (sic), notably the decidedly rock and roll bistro, The Muddlers Club, whose chef-patron Gareth McCaughey used to be head chef at The Ox (Toman has a share in this project, too). Conveniently it’s just around the back of The Duke of York and is named after a secret society that met in the building 200 years ago. McGaughey’s own roots are no secret – the brilliant, seasonally acute menu from the open kitchen echoes The Ox. The same trendy staccato dish descriptions – ‘salsify, yolk, pancetta, truffle’ and ‘duck, quince, parsnip, mustard’. 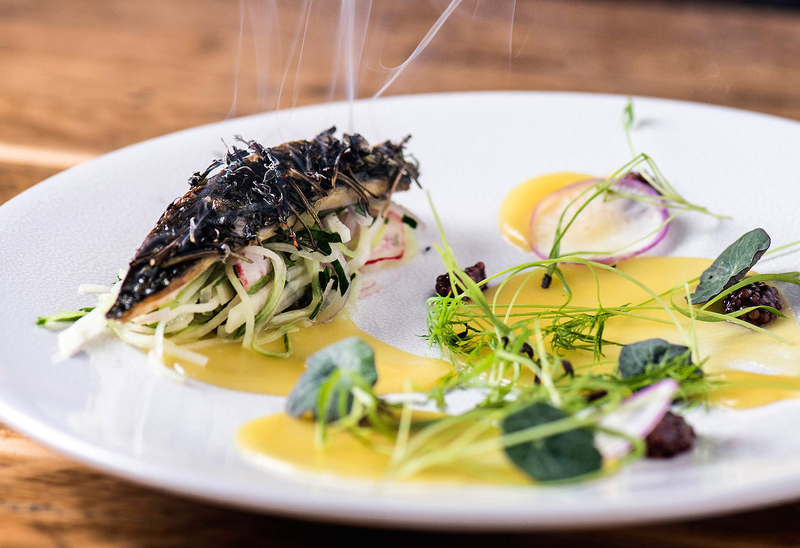 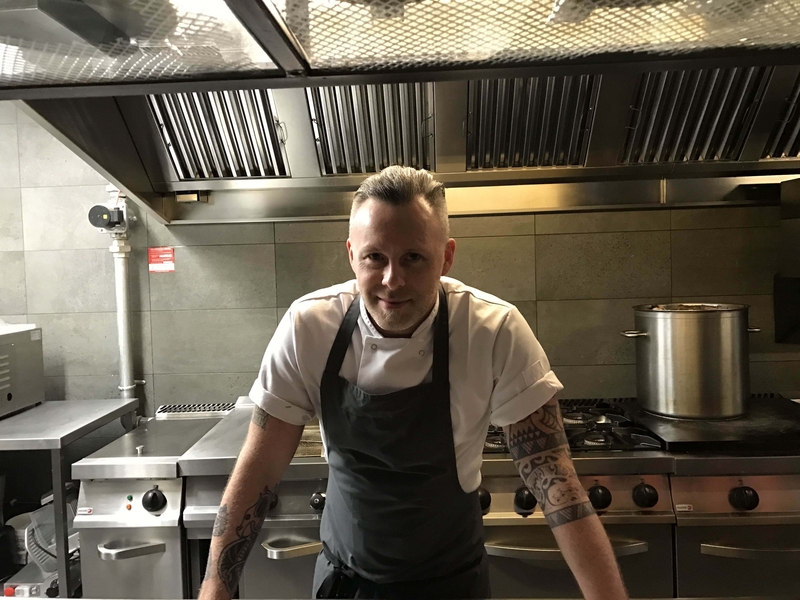 TAKE a stroll down Hill Street from the Protest St Ann’s Cathedral and grab a coffee at Established (No.54). Set up by Bridgeen Barbour & Mark Ashbridge in late 2013 and sourcing its roasts from Dublin’s 3fe (plus regular guests), it sparked the city’s vibrant coffee scene. Kick off your brunch with bruschetta-style topped sourdough from Zac’s Ballynure bakehouse, followed by some Middle-Eastern influenced small plates or wicked cakes.

Further along at 18-22 (you can’t miss it thanks to the huge monochrome mural on the gable end) you’ll find underground arts hub Black Box, whose website describes it as “a home for live music, theatre, literature, comedy, film, visual art, science, circus, cabaret and all points in between”. It also craft beer aplenty from 13 taps. If that whets your thirst cut across to the best beer bars in town, The John Hewitt at 51 Donegall Street. This traditional pub homage was opened to fund Belfast Unemployed Resource Centre and named after the radical poet, who died 30 years ago (this is a city of long memories), but its role call of new wave Irish craft beers is very contemporary. 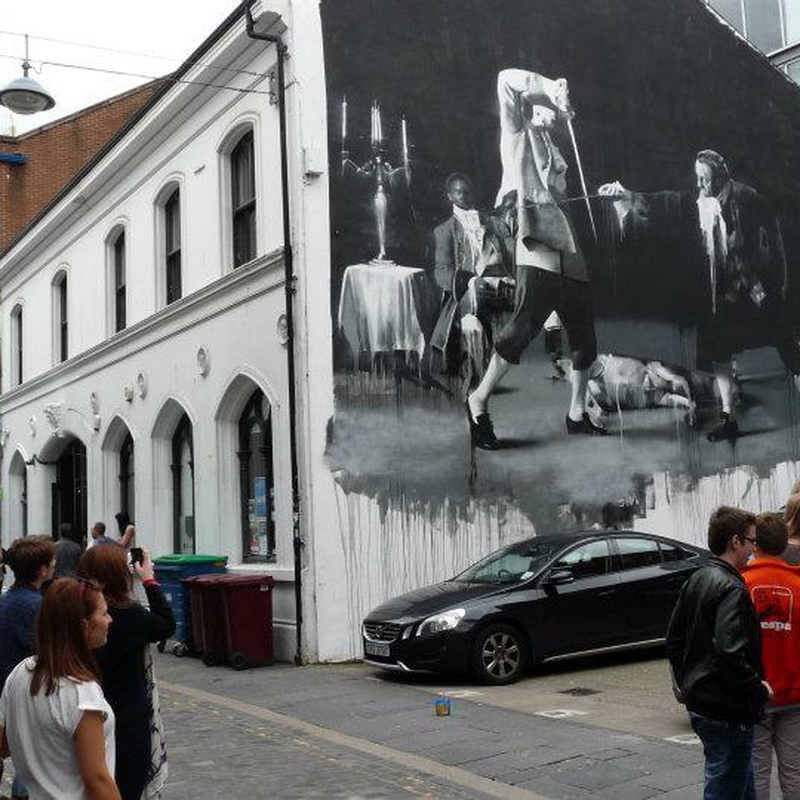 IN complete contrast to all this leftfield energy, Belfast also does civic pride with some elan. There’s plenty to see if you follow one of the local Civic Trust’s walking trails, or  turn up for one of the free thrice daily guided tours of the marbled behemoth that is the City Hall (it loomed over our base, the Ten Square Hotel). But our favourite building in the centre is the nearby Linen Hall Library. Irish Nobel laureate Seamus Heaney said of this independent store of knowledge, founded in 1788, “In our cultural and our historical understanding the very words 'the Linen Hall Library’ represent not just books, but better hopes for the way we live.” Membership gives you many privileges, but the general public is welcome to borrow books and use it as a meeting place as well as being granted access to its many specialist archives. The 250,000 items in the Northern Ireland Political Collection form the definitive archive of the recent Troubles (the posters on the walls from those times are amazing. What a beacon of peace this Library is. 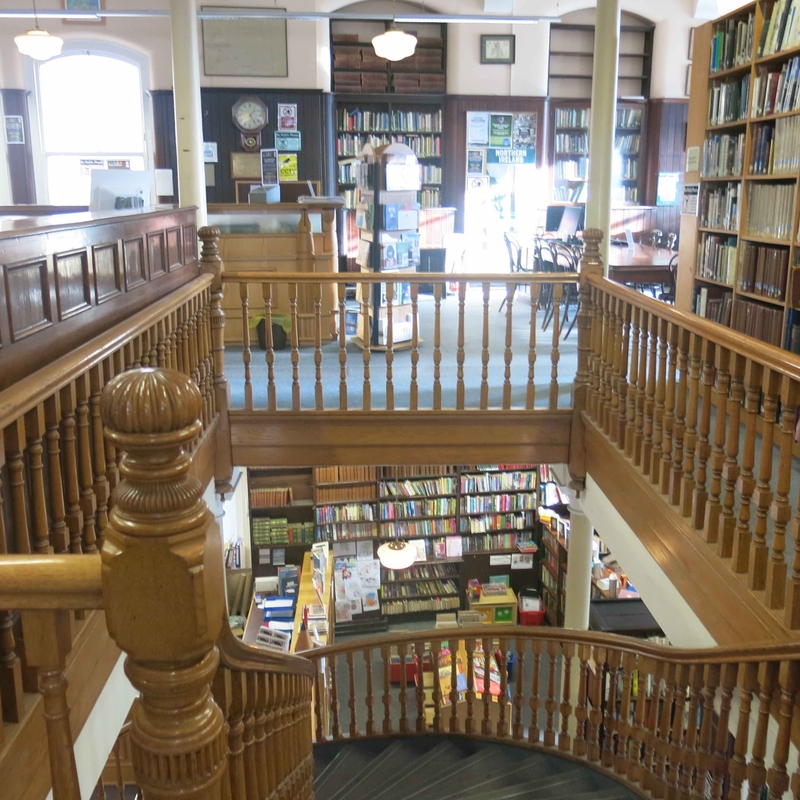 THEY call the walk from City Hall to Queen’s University ‘The Golden Mile’. At its heart is the student-led Queen’s Quarter with all the usual coffee and craft beer haunts along with boutique shopping on Lisburn Road. Keep going and you’ll hit the leafy 28-acre enclave of the Botanical Gardens, home to some rare oaks. In truth, the Victorian Palm House is in need of a little restoration compared with a later project of its creator Richard Turner – the Great Palm House at Kew. Its floral delights are overshadowed by the nearby Ulster Museum, a wonderfully eclectic collection across 8.000 square metres of gloriously renovated exhibition space. In a blissful afternoon we took in a visiting Goya show, glass cases full of poisons, dinosaurs, Armada relics, dwarf elephant skeletons from Sicily and a whole host of natural history and ethnographic curiosities. 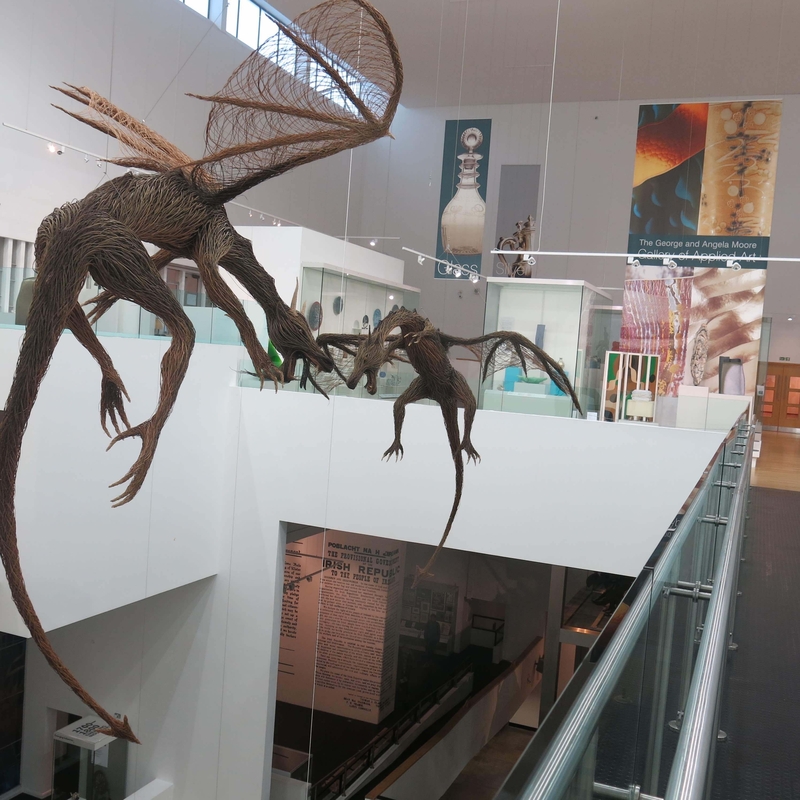 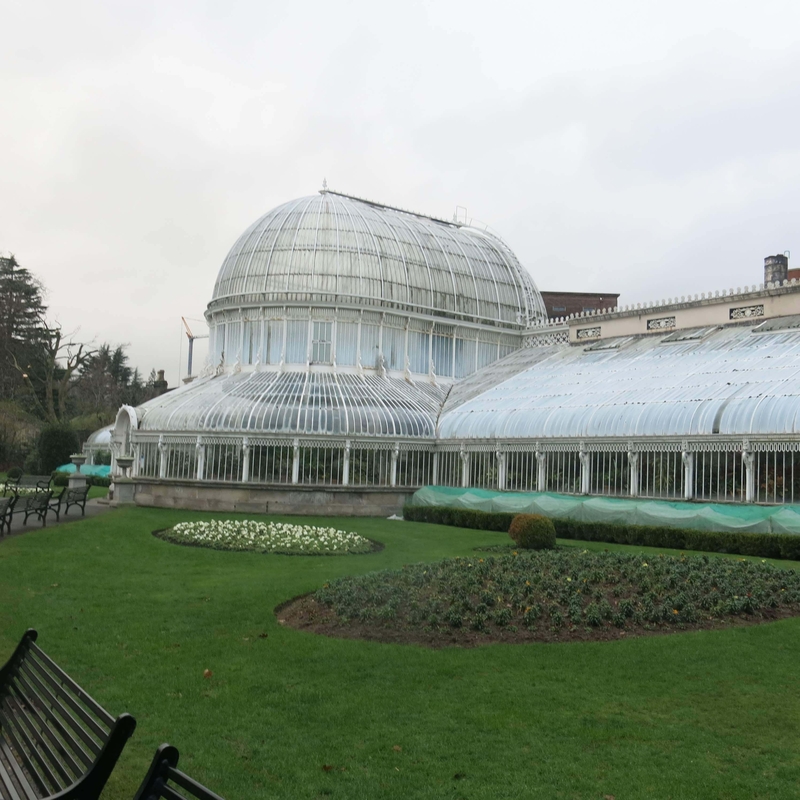 VISITING a market is one of the great weekend break joys. Doing Barcelona without the Boqueria is unthinkable, say, and if St George’s,  close to the River Lagan waterfront is not in the same league it still won Best Market in the 2016 Observer Food Monthly Awards – based on its transformation from more general trading to a foodie destination at weekends. We’ll shamelessly quote the OFM: “Over the past five years, St George’s has been transformed into a food lover’s paradise. High-end meat and vegetable producers, including local stars Greenmount Farm, Mullan’s Organic Farm, Pheasants Hill Farm, Broughgammon Farm and Helen’s Bay Organic Gardens, sit happily next to takeaway stalls selling an array of international food.” Oh and there’s live music, too.

OUR visit to Belfast coincided with a new documentary about a Belfast boy so legendary they named an airport after him. OK, George Best – All By Himself opened to mixed reviews and we flew into the International rather than George Best City Airport, but the legacy of this greatest of footballers (1946-2005)  is honoured in the area of East Belfast where he grew up. To explore download for free The George Best Trail. You can even rent a holiday stay his childhood home at 16 Burren Way on the Cregagh Estate. The Manchester United legend is buried beside his parents in the Roselawn Cemetery. 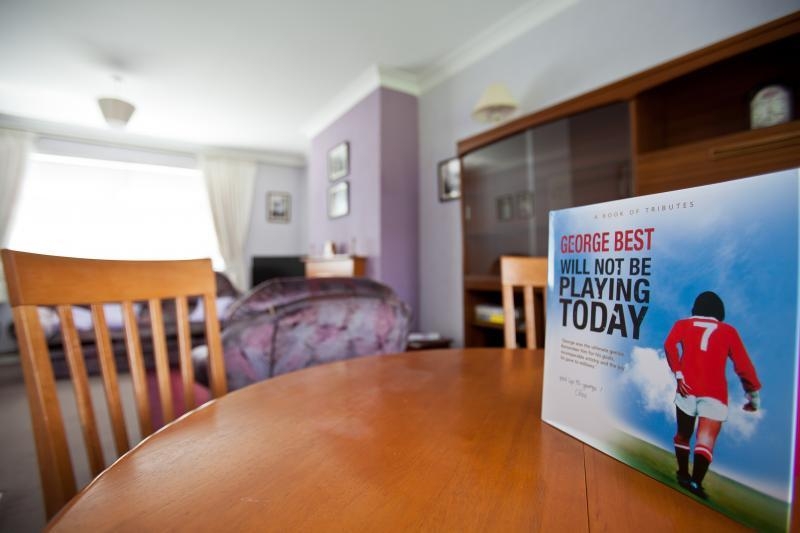 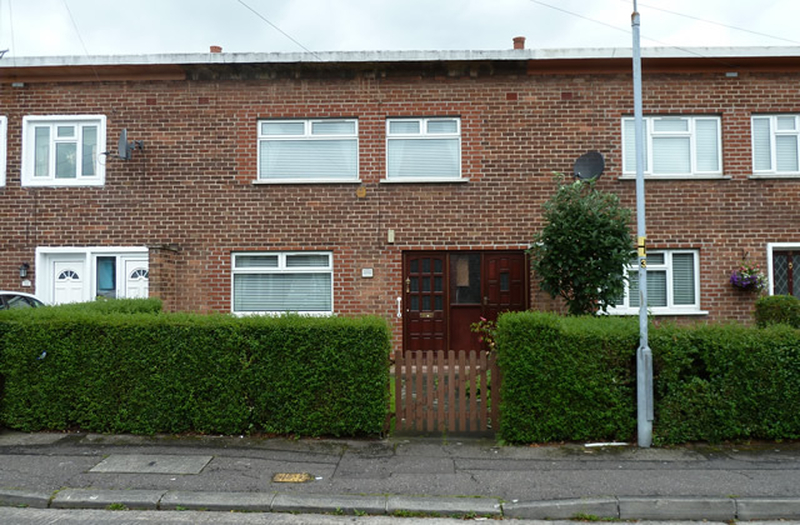 CLIVE Staples Lewis, another East Belfaster, was born half a century before George Best and his chosen path was the Dreaming Spires rather than the Theatre of Dreams, but his influence extends beyond academia thanks to his creation of the magical kingdom of Narnia in a series of books commencing with The Lion, The Witch and The Wardrobe. He too is celebrated with his own Trail, which starts at 'The Searcher' sculpture outside Holywood Arches Library, depicting the writer as his character from The Magician’s Nephew opening the wardrobe. The trail also includes sites such as St. Mark's Church, where his grandfather was rector and where Lewis himself was baptised, and No 47 Dundela Avenue where a Blue Plaque marks where the writer was born plus Campbell College, his boatding school whose ornate entrance gas lamp is though to have inspired the one leading into Narnia. There’s also a trail devoted to a third son of East Belfast – Van Morrison.

No, we haven’t forgotten The Titanic

YOU can’t really miss ‘European’s leading visitor attraction’ (World Travel Awards), erected on the site where the doomed ocean liner was constructed, now the hub of the 350 acre Titanic Quarter regeneration project. The setting is magnificent, the shiny silver building shaped to look like four hulls – against the backdrop of the iconic Harland and Wolff waterfront cranes. Inside you trace you way through six storeys of clanging, sensory-challengin, interactive exhibits, detailing the story of the ship and a vanished Belfast at its industrial peak. The testimonies of passengers and crew are particularly poignant. A visit costs £18 for an adult, £8 for children five to 16, under-5s go free and a family pack costs £44. It’s easy to get to and there is ample on-site parking. Allow a couple of hours to get the full impact of the walk around. For full details visit http://titanicbelfast.com. Visit too the remarkably well preserved Nomadic, the tender that took the passengers out to Titanic and a 10 minute walk away the original dry dock, the largest in the world. 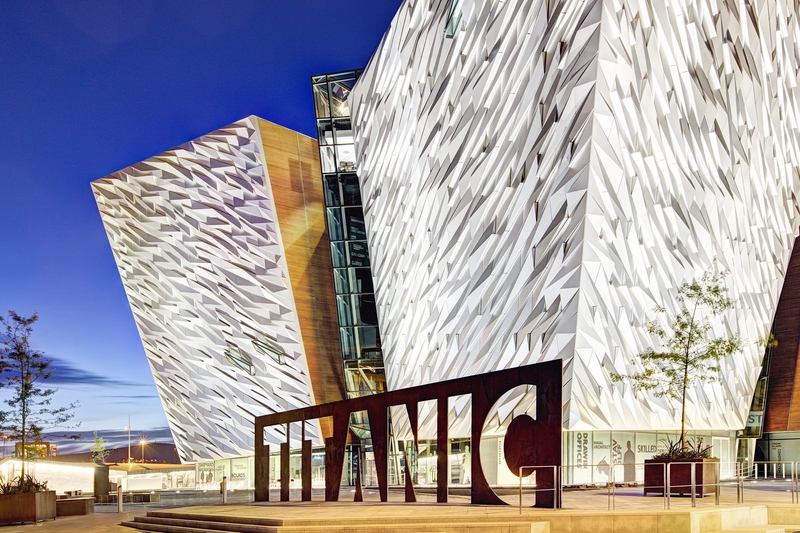 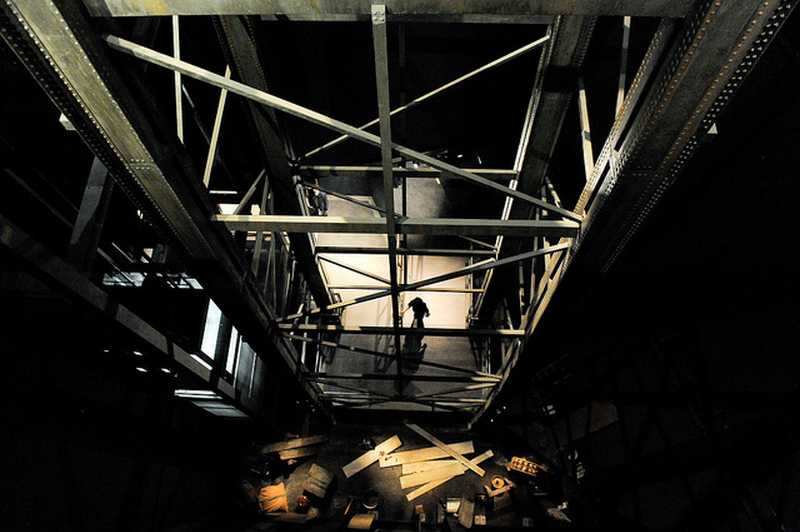 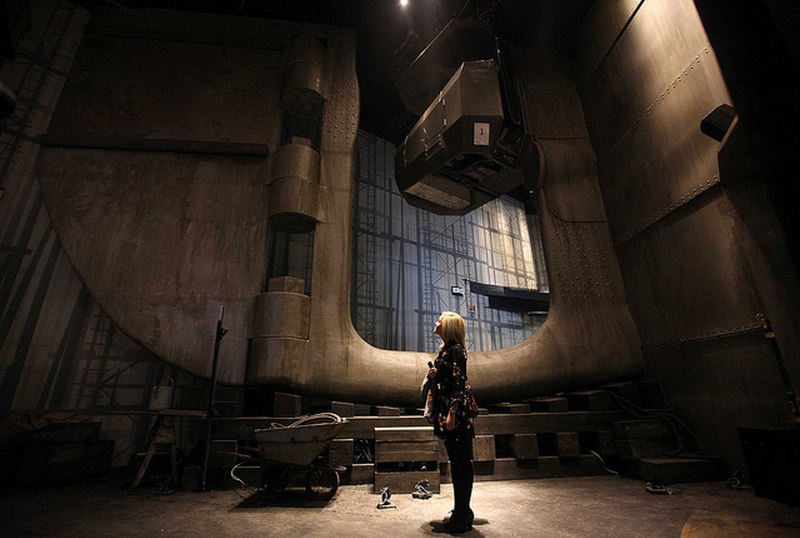 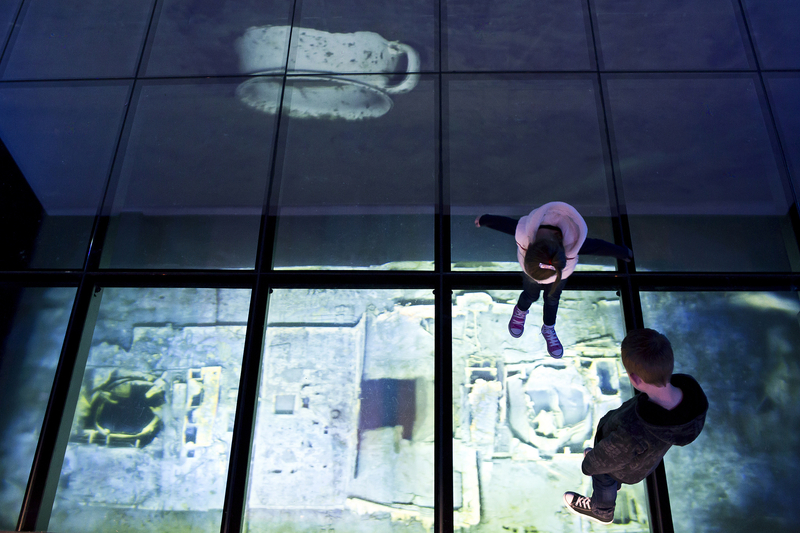 He flew with easyJet from Manchester to Belfast International.

Neil Sowerby parked at Manchester Airport. For full details of parking there visit this link.

and for further afield in the province www.discovernorthernireland.com