Everything you need to know about Pride this weekend

What’s on and where, plus events and offers citywide. Let the bank holiday bonanza begin

With August bank holiday fast approaching, it can only mean one thing…the return of Manchester Pride. And with Pride Live (headlined by Ariana Grande) making its debut at the brand new Mayfield Depot venue - a new 10,000 capacity former railway station that will also host the famous Warehouse Project parties later this year - it’s set to be the biggest party yet.

The bank holiday bonanza launches on Friday at 7pm with the Gay Village Party; promising four days of shenanigans until Monday (12pm-12.30am), with tickets from £10. Events include a family zone, expo, sing-a-long cinema, silent disco, fairground rides and even a ‘fetish emporium’. Oo-er. Performances on the Thomas Cook Airlines stage in Sackville Gardens, meanwhile, include; Lulu, Liberty X, Saara Alto, Stephen Bailey, Rhythm of the 90s, Danny Beard & Friends, Le Queenz, Proms in the Park and the Queer Music Stage.

Also opening Pride on Friday will be the Superbia Weekend, an alcohol-free cultural alternative to the traditional hedonistic Pride celebrations. Enjoy film screenings, a pop-up art gallery, the BiPhoria Birthday, conversations, yoga, author events, a post-Pride Parade party and more - with most events free of charge. Headlining the weekend is the North West premiere of Deep in Vogue, a compelling documentary on Manchester’s vogue ball scene; featuring performances from Honey Dijon and House of Ghetto, and followed by a voguing after-party.

As ever, the free Parade takes centre stage on Saturday - this year inspired by the 50th anniversary of the Stonewall riots, with a theme of ‘Deep Space Pride: A Future World of Equality.’ Thousands of people will march through the streets of Manchester, as spectators in their tens of thousands cheer them along the way. It sets off at midday by Beetham Tower on Deansgate, and finishes at 3pm. 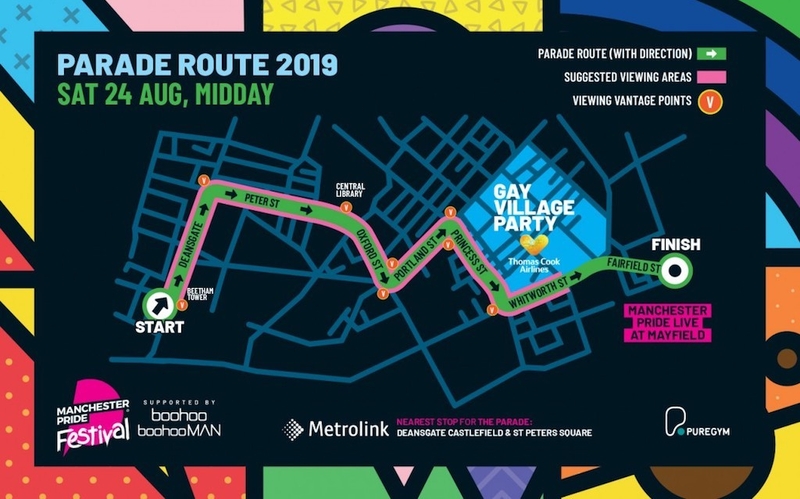 Saturday also sees the launch of Pride Live from 12pm-1.30am, headlined by Years and Years on Saturday (tickets from £34.50) and Ariana Grande on Sunday (daytime tickets sold out, weekend or rainbow passes still available from £64.50). They’ll be joined by acts including Cheryl, Emeli Sandé, Tulisa, Basement Jaxx, Kim Petras, Ministry of Sound, Bananarama, Faithless, Pixie Lott and more - not to mention the newly-announced queens of RuPaul's Drag Race UK.

The Mayfield-based event will take over two cavernous spaces indoor and out - The Yard and Depot respectively - while The Concourse will host a street food market, bars and another stage area hosting pop-up performances. The platforms of the station will be home to a funfair. Extra security precautions this year mean all attendees require a 100% transparent plastic bag for belongings.

Meanwhile, the new Youth Pride MCR - which debuts with a range of events for young people at YES across the weekend - has proven a sell-out success.

As ever, Monday's Candlelit Vigil will see a reflective end to the celebrations on Sunday at 9pm; as attendees take a minute to remember those lost to the HIV virus and the challenges that that LGBT+ communities still face today. Sackville Gardens, home of Alan Turing and the Beacon of Hope, turns into a sea of flickering candles as the party comes to a close.

Manchester Pride Festival is the flagship event of Manchester Pride; one of the UK’s leading LGBT+ charities, which has raised and distributed over £1.5million to related causes since 2003. As well as Pride initiatives across the city, also including the return of the giant Spinningfields paintbrush and rainbow decoration along the main thoroughfares, the weekend will also see a host of offers and events citywide.

We’ve picked out some below…

Pen and Pencil will be hosting a weekend of events and offers, including 25% off food for wristband wearers.

Thirteen Costa Coffees along the Pride parade route will stock reusable Pride cups, with 100% of proceeds going to Switchboard; one of the UK’s oldest LGBT+ charities.

Turtle Bay and several venues in the Corn Exchange - including Pho, Cosy Club, Alston Bar & Beef - will be offering limited edition Pride cocktails, with a percentage donated to LGBT+ charities.

House of Evelyn and Oliver Bonas will be offering pre-Pride makeovers.

HOME will be hosting a specially curated season of films, including the award-winning documentary Before Stonewall; an evening of queer voices and awe-inspiring writers, poets and activists with Penguin Pride; and a Rainbow Noir exhibition.

Lululemon will be putting on free Pride & Present yoga.

The Crystal Maze will be transformed for Pride, as will Afflecks (whose Ginger’s Emporium is also offering ‘no vanilla, only rainbows' ice cream).

Chill Factore will be offering discounts to anyone with a Pride wristband.

The Refuge’s fourth Come As You Are Weekender returns for three days and nights parties, culture and special guests; including the launch of Superbia Weekend.

Albert's Schloss is celebrating with a full weekend of events; including a ‘Girls on Film’ night of eighties and nineties hits, an all-day disco marathon with glitter queens ‘La Discothque’ and a ‘spank holiday’ DJ session headed by Will Tramp.

Mark Fletcher, CEO of Manchester Pride, said: “This is such an exciting year for Manchester Pride. Not only have we secured a world-class line-up but there are so many new elements to the festival that enable us to deliver something that truly is for everyone. We want festival goers to be able to choose their own Pride celebrations; whether that be through live performances at Mayfield, an LGBT+ party in the Gay Village, a sober space for arts and culture and a brand new event designed for a new generation of young LGBT+ people with Youth Pride MCR.

“We are so incredibly proud of this year’s event and hope that our audience can join is in what is set to be a Pride celebration like no other.”