What’s the wurst that can happen?

Ever wanted to share an opulent Bavarian feast and knock back a few bevvies with Victorian royalty? Well now you can (sort of) thanks to Albert’s Schloss’s newly launched interactive dinner party concept – the supper klub.

Groups of 15-20 seated guests can now exclusively hire The Study, a raised semi-private space next to Schloss’s grand fireplace, where they can eat, drink and gossip behind closed curtains away from prying eyes. The Study gets transformed into an enticing dinner table hideaway, beautifully decorated with foliage to create an enchanting oasis, ready for an evening of pure frivolities. Diners will be joined by a series of very special supper klub hosts including a hugely welcoming Prince Albert himself and her majesty, Queen Victoria, who will make sure everyone is well fed and watered.

They turned out to be very chatty after a few drinks, when we went over to try it out, and we managed to cover quite a range of subjects including who really started the first world war and what was the real story behind THAT piercing…?

A private dining experience like no other, Albert’s Supper Klub is the first of its kind in Manchester. Its inspiration comes from The Age of Enlightenment - an intellectual and philosophical movement that helped form the world of ideas in Europe during the 18th century. During this time, a number of secret societies came into fruition, most famously, the Bavarian Illuminati, who were eventually outlawed.

The exact qualifications for entering these secret society are disputed, but members insisted on it remaining a secret, even going so far as to deny being a member or even having knowledge of the group, despite personal bonds between members and the use of secret rituals which solidified them.

Prepare for a Bavarian sharing feast fit for a Prince, with intricate Alpine gastronomy, small plates of rustic and simple Bavarian-inspired dishes - where the secrets behind the curtains are for guest’s eyes only.

To start, we ripped apart freshly made pretzels to dip in sweet mustard and scoop up rich bier cheese sauce. There were platters of Alpine cheese, pickles and several types of freshly made croquettes including pancetta and gruyere, Alpine cheese and mint, and slow roasted lamb shoulder with beer chilli mayo.

Side dishes of all kinds, including charred broccoli and German potato salad, were being passed around (but not dishes of Schloss’s famous sformato – cheesy baked truffle mash - which we couldn’t bring ourselves to let go of) until we all had to loosen our corsets and cummerbunds.

To finish, the (entirely discreet) serving staff brought all guests a round of espresso martinis while an increasingly sozzled Empress helped to pass round huge wooden platters of mini black forest gateaux and banana caramel cake squares, before giving us a lip synced rendition of Hey Big Spender.

Bookings are now being taken for Albert’s Supper Klub, seeing exclusive private use of The Study, Bavarian feast and entertainment all part of the package. Albert’s Supper Klub is suitable for groups of 15 or more. For more information click here or contact neil@alberthallmanchester.com

Albert’s Schloss will celebrate truth, beauty, freedom and love with seven Days of entertainment for the Wintermarchen season, including music, art haus performances, kabaret and all the usual Schloss shennanigans, complete with cook Haus, biers and cocktails. 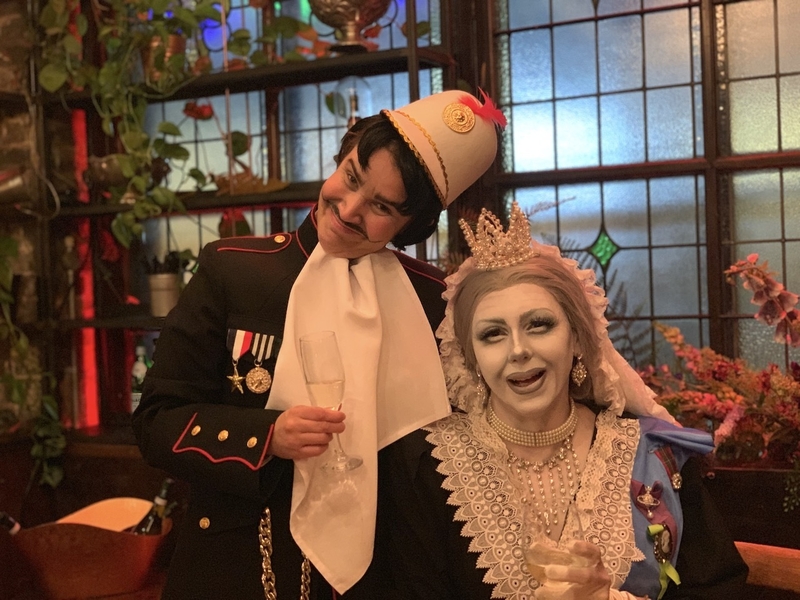 Friday - Wunderland - A night of wunder with live bands and promenaders