COVID-19 update: 'There have been reports of people fiddling the system'

Mayor Andy Burnham held his weekly coronavirus conference this afternoon (Wednesday 3 February) to deliver an update on the COVID-19 figures for Greater Manchester and comment on the progress of the vaccination programme in the area. The Mayor was joined by the leader of Manchester City Council Sir Richard Leese, Baroness Beverley Hughes and Professor Kate Arderne.

The Mayor paid his respects to Captain Sir Tom Moore saying "he lifted the nation... on behalf of everyone in Greater Manchester we wanted to add our tribute."

The flags at Stockport Town Hall and Central Library will be flying at half mast in his memory.

Greater Manchester is slowly decreasing with an infection rate of 266.6 per 100,000 population which is below the England average. 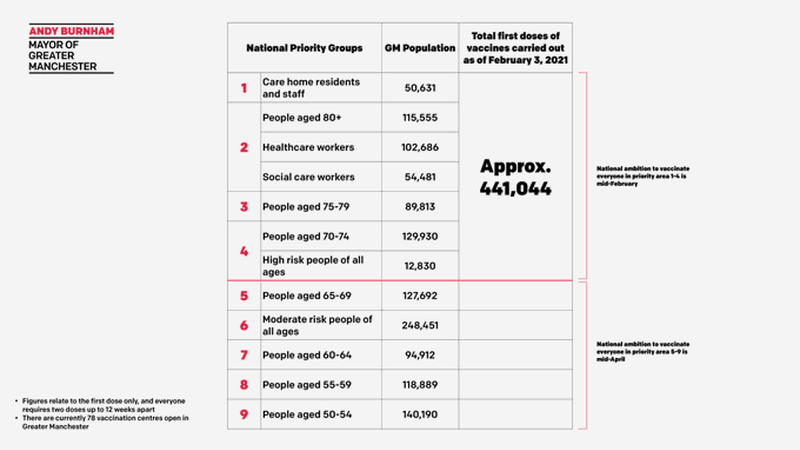 There have approximately 441,000 vaccinations in Greater Manchester so far.

Sir Richard Leese said: "Our expectation is that we will have been able to offer a vaccination to everyone in the top four priority groups by the deadline."

There are still issues around vaccine hesitancy and refusal. There is some evidence that there is greater hesitancy among some - not all - BAME communities and economically deprived communities. This was discussed in the GMCA committee meeting and with the other metro mayors. Mr Burnham said it would be helpful to get the data on those who are refusing, because "if we know more and we can begin to see the localities where people are turning the vaccine down. One thought we had was that GPs could follow up with those people and provide them with reassurance."

Compared to other vaccines, there has been a very high take up among healthcare workers. 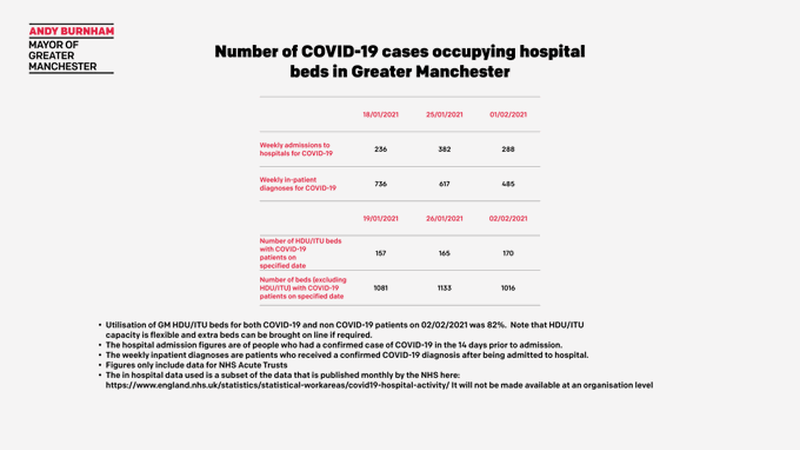 A large part of testing is aimed at keeping people in work and is being supported by the army. Andy Burnham highlighted the Greater Manchester whole system contact tracing which, according to Professor Arderne, is "a model of good practice". The Greater Manchester team has been giving aid to other parts of the country including London. They have also been working with the Liverpool hub in order to be trained in surge testing for the new variants.

Manchester’s historic Rates Hall will open as a testing centre today (3 February). The testing will be offered to keyworkers and a booking system is in place.

The percentage of care home residents showing symptoms has gone back down to 2.1% which Sir Richard said is "stable - which is a good thing in this current climate."

There has been a dip in weekly admissions. ICU beds (covid and non-covid) reached a peak which was nearly at the full capacity. Sir Richard commented: "we have had hospitals that have needed assistance in managing the number of intensive care beds this last week.

"The modelling suggests this will be the situation for the next three to four weeks."

Addressing reports that teachers in Rochdale have been accessing vaccines when they were not on the priority list, Sir Richard said: "There have been reports of people fiddling the system... at the moment we are using all our vaccines.

"If people are gaming the system they are denying somebody at greater risk the vaccine... and undermining our efforts to relieve pressure on the NHS."

Demand on the police and partner organisation is high but lessening. Last weekend there were 550 reports to police and 140 fixed penalty notices were issued, in the main for house parties. Baroness Hughes noted that the parties were generally smaller, perhaps due to more stringent regulation against gatherings of 15 or more people.

Neighbourhood teams are working to persuade people not to celebrate a "significant religious festival" this month.

The fire service has specially trained members of staff supporting the test and trace hub.

Read again: COVID-19 Update: "It is morally unjustifiable to leave people behind"