Mayor Andy Burnham held his weekly coronavirus conference this afternoon (Wednesday 17 February) to deliver an update on the COVID-19 figures for Greater Manchester and comment on the progress of the vaccination programme in the area. The Mayor was joined by Baroness Beverley Hughes who commented on policing matters.

Mr Burnham took the opportunity to reiterate his call on the Government to provide a comprehensive package of support to people who need to self-isolate and to protect people who need to go out to work during the pandemic. He called on the Health and Safety Executive to reconsider the classification of COVID as a workplace risk, saying: “We don’t believe enough focus has ever been placed on workplace safety from a national level.” 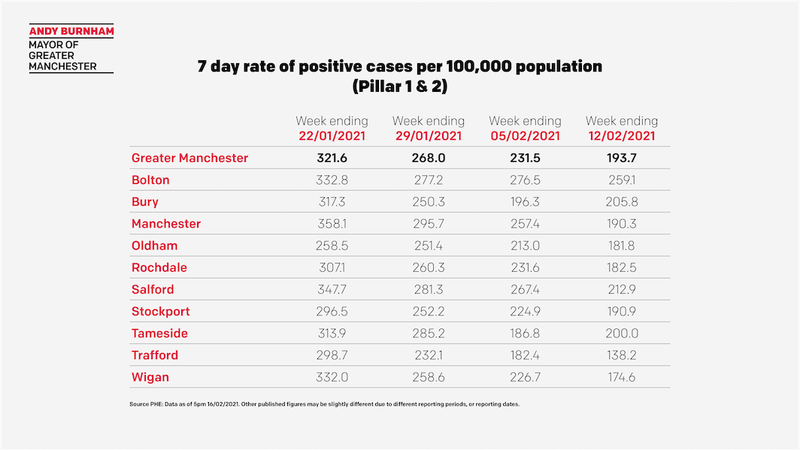 The latest figures for cases of coronavirus per 100,000 population is 193.7 across Greater Manchester as whole. Most areas have a falling rate except for Bolton and Tameside. "Greater Manchester again is recording a slower rate of decline than the rate that we see in other parts of the country" said Mr Burnham, referring to the fact that the North West has the highest rates of infection in the country.

Testing is increased due to the introduction of lateral flow test among some sections of the working population. The big news is that enhanced community testing has begun in parts of Moston and Harpurhey after a case of a mutated form of COVID-19 was detected. Mr Burnham also thanked the residents of Moss Side for working with the teams on the ground in the surge testing which began there last week.

The virus identified in this area is a Kent variant with E484K mutation and has recently been classified as a variant of concern. Investigations are under way to understand if the virus has spread further in the community.

A mobile testing site will be set up at the Ebsworth Street car park in Moston.

This site will be open from 12pm until 5pm. From tomorrow (Thursday 18 February) it will run seven days a week between 10am and 5pm. Additional testing sites will be set up in the southern part of the testing zone to enable everyone over the age of 16 who lives, works, or studies in the designated area to get a test as quickly as possible.

These sites will operate as walk-up centres with no need to book a test in advance. Volunteers will also begin knocking on people's doors to offer alternative testing for anyone who can't get out to a testing site, and testing will also be made available for people who work in the area but don't necessarily live in the area.

Details of the postcode areas affected can be found on the Council's website, this will include a map outlining the boundaries of the testing zone.

There is a slight increase in the case rate in care homes which needs to be "kept a close eye on" according to Mr Burnham.

There has been an easing of the pressure in hospital, though Mr Burnham adds, "The situation is still very tight indeed... colleagues are keen to point out that this remains a difficult situation for the NHS across Greater Manchester." Of all patients in hospital, 17 per cent are COVID patients which is an improvement on the previous week's figure of around 30%.

The Greater Manchester system continues to provide mutual aid to other parts of the country.

The top line figure is that 639,218 GM residents have had at least a first dose of vaccination.

The mayor suggests that the Government ought to open the national booking system to younger people as they are more likely to be mobile and be able to get themselves to the centre.

Mr Burnham says there are currently no issues with vaccine supply.

The Mayor said, "It remains a firm Greater Manchester view that we should see a national phased return. We do not want to see any return to the regional or sub-regional tiers, which we do not believe worked, were confusing and divisive... "

"Please let's not repeat the mistakes of 2020. Tiers will not able to provide an adequate defence," said Mr. Burnham.

In the last seven days to Monday, Greater Manchester police have dealt with 1,205 COVID-related incidents and issued 228 fixed penalty notices, 180 of which were issued over the weekend alone.

Beverley Hughes noted, "We are seeing a resurgence of large gatherings," which included a large party in the Beetham Tower, which ended in a fight with about 50 people. “You just see what very difficult situations officers have to go into, putting themselves at risk in a variety of different ways", she said. The owner is being pursued for a £10,000 fine. Other events included a work party in Salford and a wedding party in Oldham.

There has been a trend for gyms opening and a large yoga gathering in Stockport has resulted in another £10,000 fine.

GMP is looking ahead to prepare for restrictions easing which they predict may result in smaller gatherings and potentially in an increase in street robberies.

Read next: Manchester mayoral and council elections confirmed for May