Manchester-based statistician, Simon Hall, takes a look at the figures here and across Europe

The threats of tighter lockdowns, and even another national lockdown, due to Covid-19 are becoming more frequent. This is down to the number of new positive tests for the virus.

Simon Hall is a retired statistician (or ‘number-cruncher’ as he calls himself), based in Greater Manchester. He’s been analysing the pandemic since March and his research shows that something very interesting is happening. His sources have included, coronavirus.data.gov.uk, www.worldometers.info, the BBC, the Financial Times amongst others.

As for Greater Manchester’s recent semi-lockdown there’s nothing in the stats to suggest anything positive has come out of it.

Covid19’s spike 2, is now well underway. In fact, cases have been rising week on week since the middle of July in both Greater Manchester and the whole of the UK.

As was the case first time around, other Western European countries' experiences have distinct similarities. There are rises pretty much across the board. Spain and France have suffered almost as high a case rate in the last couple of weeks as they did first time around – almost four times as many cases per capita as we have had this last fortnight. However, the UK’s figures are now rising rapidly just like theirs were a few weeks back, so we are going to end up closer to where they are. Germany has also seen a rise, but it is far, far slower, suggesting they are keeping a lid on things (again).

The local story is an exaggerated version of the UK’s. Between the 10 and 17 September, there have been two and a half times more cases per person in both the North West and Manchester compared to the UK as a whole. In Bolton, the figures are rising twice as fast again. The North West has had 50% more cases per capita than England has had; this gap is now widening even further. 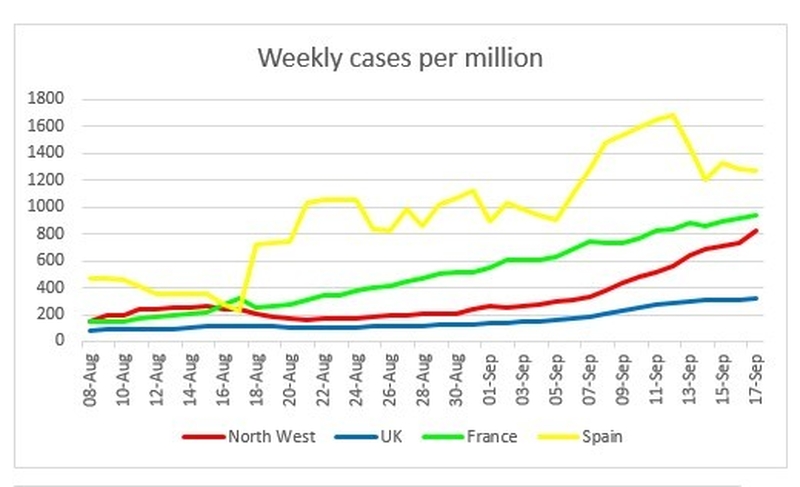 Spain and Germany are interesting test cases as they are at opposite ends of the spectrum when it comes to coping with Covid-19.  Spain’s (and, depressingly, our) overall mortality rate is 6 times higher than the Germans’. They’ve struggled in numerous ways; the poor live in densely populated, multigenerational homes, huge swathes of the young traditionally drink outside in big groups as it’s cheaper than bar-hopping, decentralised government has led to inconsistent policies, track and trace failures, rapid abandonment of social distancing policies etc. Germany, on the other hand, got most things right; the track and trace worked, people comply with directives and they have far greater numbers of ICU beds.

Spain’s testing is showing a 10% rate of infection whereas we are hovering around the 1% mark – so we may yet come out a good deal better than they do this time around.

But how will all of this translate into actual mortality, both here and abroad? The signs are that there will be nothing remotely like the number of deaths we experienced in April and May while the figures across all European countries are following a very similar trend.

The death rate relative to the number of positive tests hovered around 20% in France, Spain and UK in April. Since the end of July, however, it has remained below 1% - not enough to make a dent in the overall mortality stats.

As Spain is a month ahead of us in terms of the re-emergence, it is worth looking at their stats. In the last week, 13 people per million died. In early April, the figure was 128. Meanwhile, the North West’s rate is 2 and the UK’s, 1. 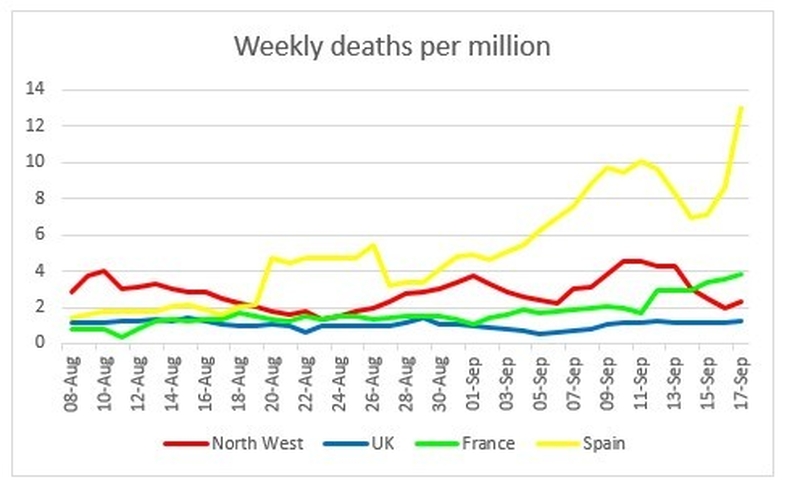 This enormous change is for a variety of reasons - some are definites, others are unsubstantiated. So, in descending order:

- a huge proportion of vulnerable people are still shielding

- we are testing 10 times as many people as we were in April. This has several effects; it allows infected people to isolate and to get treated plus it inflates the stats compared to previously

- healthcare is better – not least because of the use of the steroid, hydrocortisone

- the University of Oxford’s Centre for Evidence Based Medicine suggests we might be recording a lot of false positives by counting people who did have Covid-19, haven’t anymore but do still carry a trace of the virus

- The virus might be becoming weaker. There’s no proof for this but even the Deputy Chief Medical Officer said last month that it’s conceivable.

As for Greater Manchester’s recent semi-lockdown there’s nothing in the stats to suggest anything positive has come out of it. Numbers were actually going down at the time it was imposed. They then continued to fall for a bit before going up again – even relative to the rest of the country.

So with death rates so relatively low, although each one is a personal tragedy, Hall’s information points away from the efficacy of further lockdowns and points at the need for vigilance while letting the economy ignite once more. 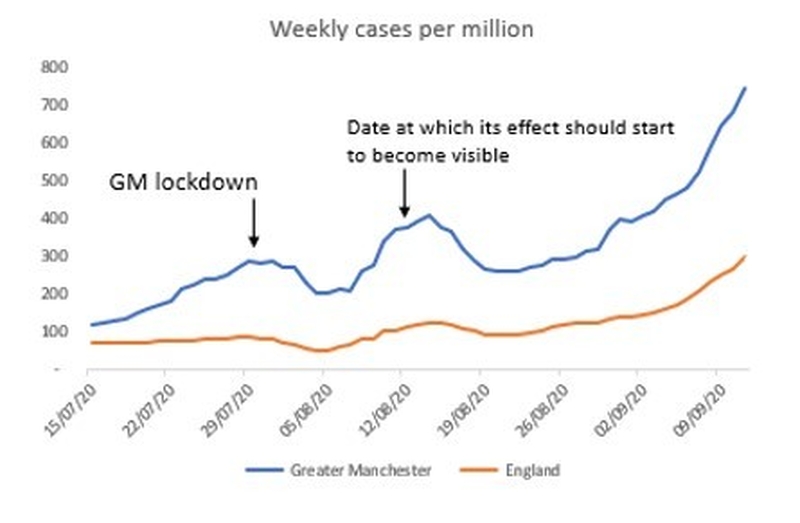 Another prominent local, economist Paul Ormerod from Rochdale, has also commented on this in an article for City AM.

He writes: ‘The key question is not really how many people might get Covid-19. It is how many might die as a result. In the jargon, this is the case fatality rate (CFR), the probability of dying from the disease if you catch it.

In the very vulnerable group of the over 80s, in March and April the CFR was a frightening 29 per cent. By July and August this was down to 11 per cent.

‘So deaths remain very low not just because it is mainly the young now catching Covid-19 or because the elderly are shielding. Both of these are true.

‘More fundamentally, fatality rates amongst those who actually have the virus have fallen sharply. Treatment has improved. Social distancing means less strong doses are being caught. Whatever the reason, the CFR is down.

‘Government advisers and health care professionals appear not to have taken this on board. They speak and act as if a second wave will be as lethal as the first. They have long thought that a second wave would be devastating. The emerging evidence should not be allowed to get in the way of this. Their irrational behaviour is costing us all dearly.’

This is a curious moment. Manchester and the rest of the country seems stuck in a slow motion science fiction movie where freedoms are removed ‘for the collective good’ while the health impacts of the lockdown and semi-lock downs are starting to appear worse than the virus itself.

For many people it’s hard to understand how continuing with policies that will deliver mass unemployment are pursued when the death rate from Covid 19 is now so low. The figures don't seem to add up.

About the author - Simon Hall is a retired statistician. He says, 'Really I am just a regular member of the public who likes to collate his own numbers as he distrusts the way they can be distorted either wittingly or unwittingly."

Read our updated - Manchester arts and culture - what's reopening when?