Jonathan Schofield is happy about a surviving relic

THIS is welcome news. Last week we were worried about the potential loss of the Brutalist university buildings on the south side of Granby Row and Altrincham Street. Now, a nearby example of Brutalism, albeit a small one, will be saved.

Does anybody know any other building in Manchester that’s on stilts?

There will be 533 apartments plus shops and cafes. The cobbled Little David Street (main image) will be restored as a café-bar-lined alley, with outdoor seating, and best of all for non-residents, there will a very good looking garden down the middle. This will feature a splendid little building on stilts.

Kampus are calling this building ‘The Bungalow’. The grey-blue brick former security lodge is small but a perfect example of that odd but bold phase in architecture called Brutalism from the 1950s and 1960s. This was a time when architects who favoured the style largely ignored the context of the site and went for blocky structures that were often massive in form, such as the nearby Piccadilly Plaza complex with Mercure Hotel and City Tower.

The style is not famous for subtlety, but at The Bungalow, it might still be blocky, but it’s also coy and cute. The architect was S.G. Besant Roberts as part of the larger educational facilities for the Polytechnic on the site. Besant Roberts was the City Architect, at a time when towns and cities employed their own in-house teams.

Most developers would have torn the Bungalow down as quickly as possible, but Capital & Centric and Henry Boot Developments saw a use for the little structure in their garden. They could retain it as a village hall for the Kampus.

Adam Brady of Henry Boot Developments says: “We’ve always loved the quirkiness of the Bungalow. Does anybody know any other building in Manchester that’s on stilts? It’s our version of the village hall. One week it could be a pop-up bar, the next it could be an art exhibition, with a mix of yoga classes and music events in between. We see it having a life of its own, with something different every week.”

What is clear is that the building will live on. Cities are best when they have diversity, and this applies to architecture as well as social issues. The Bungalow’s survival is a welcome recognition of that fact. 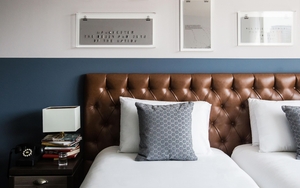