OVER the past twelve months, burger wars have come to Manchester. There appears to be a trend in value for money, trashy food at the moment; people are looking for comfort. The ‘dirtier’ the food on a plate, the better as far as everyone is concerned.

Yes, fat, ladies. It’s good for you in small quantities, especially your skin and hair. It’s what makes a burger juicy.

Burgers are a case in point; hotels, like the Malmaison and their restaurant Smoak, have gone to the trouble of making their own, ensuring that only the best meat is used. Others instruct first-rate butchers like Lee Frost to come up with a recipe and contract to maintain the recipe for them.

At Solita, the restaurant in the Northern Quarter which should have a warning sign deterring anyone with heart conditions to stay away, asks the butcher to introduce a certain percentage of marrow into the mix to ensure a really juicy affair.

Southern 11, a favourite of the Confidential crew, use ground rump steak.

So, what makes a great burger? In Gordo’s not so humble opinion, there are several factors to be weighed up, along with some advice.

No amount of mincing and grinding will produce flavour and tenderness from shin beef within an eight minute cooking period.

Yes, fat, ladies. It’s good for you in small quantities, especially your skin and hair. It’s what makes a burger juicy. Because a dry burger is not good. It needs great ‘mouthfeel’, moist and succulent.

Fat, outside the mix.

A dry bun is not good either. It needs either good mayonnaise, which doesn’t have to be home made, Gordo swears by Hellman’s dressed up with a few sharpeners; tomato sauce, maybe, Lea and Perrins. Something that shows initiative. A slice of cheese with a high fat content. Not Lancashire, that’s for sure, one that melts in relatively low heat. There is no bloody point to a hard slice of cheese. It should be melted.

Some swear by a brioche mix, others more normal white. Cicchetti use a muffin. The rule here is it must not be crumbly or, yet once again, dry.

Hmm. If so, crisp, with tomatoes at room temperature and either skinned or scored, nothing worse than large strands of skins appearing for half an hour.

Cheese has been discussed; bacon can be smoked or unsmoked but needs to be very crisp and preferably streaky. Gherkins can be small or large and tomato sauce can only be a home made chunky Italian recipe, or Heinz. Nothing else from a jar is of any use. English mustard is no use either; Gordo is defeated in these circumstances by that American yellow stuff that comes out of a squeezy bottle. Lush, it has to be said.

The top ten in the city centre in alphabetical order, are:

Somewhere in the Northern Quarter. This one is a gorgeous groaner.  Burger seasoning spot on, juicy as you please. Nearly sweet, nearly brioche bun, Gordo had the one full of crispy chopped bacon and a sauce that curls your hair. Steer clear of the ‘Suicide Wings’. Up two flights of stairs, no signage and staff on acid. Loud music and a few bewildered parents moving their middle class darlings to Uni and getting down with the kids of a Saturday afternoon. Lots of beards. You know what Gordo means. 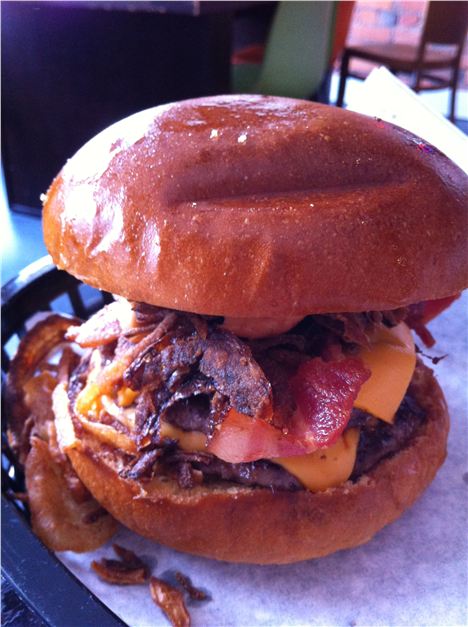 Brewdog is a Northern Quarter bar let out on probation to see what life's like outside the pen. The pared down interior is as to the point as the burgers, which are good both in terms of consistency and balance. They hold together particularly well for that classic double-hand pick-up bite. The best and cheapest of the bunch is the Californian, griddled beef, pickles and the rest for just under a fiver. Couple with a pint of Saint at 5% and it all goes down a treat, although the meat needs to always be as 'juicy' as advertised. (Jonathan Schofield) 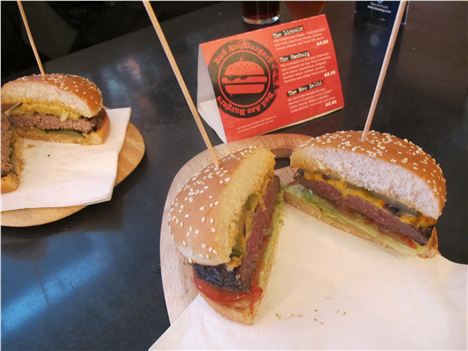 Served on a wooden board with grilled Mediterranean vegetables and some mayo on the side. Fantastic, creamy fried onions, great burger, brilliantly seasoned. Small, so that a WAG doesn’t have to show off her skills in public. It’s served, unusually, on a muffin. For grown ups. Classy. 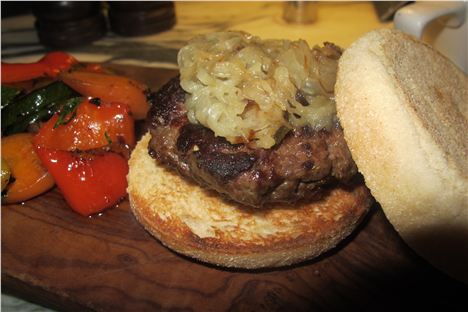 For meat lovers, replacing a juicy beef patty with chickpeas may raise some burger traditionalist’s eyebrows. Common’s Falafel and Halloumi can more than justify its ‘best burger’ tag amongst the meaty heavyweights. Between the griddled semi-brioche bun sits homemade falafel, pan-fried crisp halloumi, tzatziki, houmous, cucumber and tomato. There are a lot of elements here but each layer is light enough to complement the other flavours. As common practice in Common dictates it’s served with lightly spiced fries and purple chunky coleslaw which adds a welcome tang. (Ben Robinson) 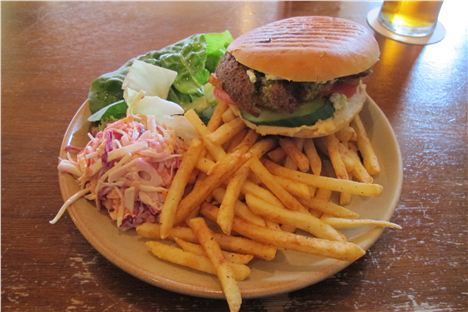 Barry Gamble, the chef at the bowling alley and eaterie Dog Bowl, has given the city the DB burger for £15. This is all you need to know about how to make a messy mountain of American-inspired food required Manchester eating - high fat, high cholesterol, high-protein, high, literally high, in terms of centimetres. It comes in layers, like the geology of the Mojave desert, with 1lb of beef in the burger, a hill of pulled pork, stabilising beef brisket and a whole Piglet of smoked bacon. A knife is skewered through this foodie still-life to make it stand. There are several onion rings tossed on top like a game of edible hoopla. The sauce and juices that pour from this delight leave the table awash with goo. You might want to lick the table. 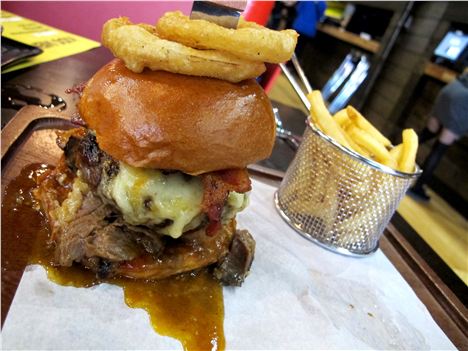 Served on a wooden board this is a frisky burger with a beautiful mustardy relish, perfectly presented with soft, forgiving, yielding mince, under a good mushy sesame seed bun with fresh lettuce and tough strong cheddar. Add Stilton for edge. Salty, kick-arse edge. You also get a linen tea towel as a napkin, a clever snippet of detail that has to be admired. (Jonathan Schofield) 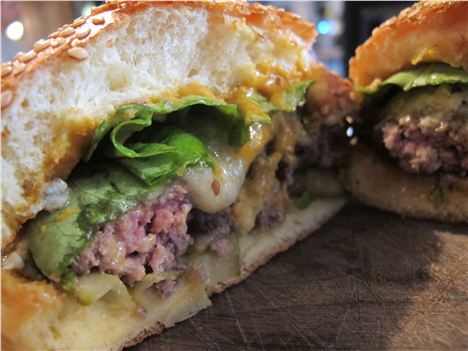 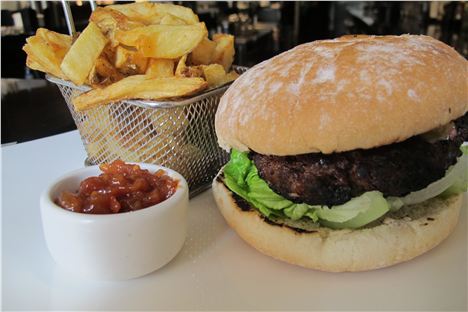 McDonalds (the morning after)

Yea, yea we know, but when the head hurts from late night madness in The Liar's Club or The Press Club and beer has mixed with wine, with shots and then cocktails, a burger with the consistency of cotton wool and with no definition at all between meat, bun, sauce and salad, soaks up the poison perfectly. And of course none of the other places here open quite so early in the morning for the cure. Helen Ramsbottom at Confidential swears by a double cheeseburger with bacon, Lynda Moyo at Confidential goes for the Big Mac.

Under The Golden Arches, The World. 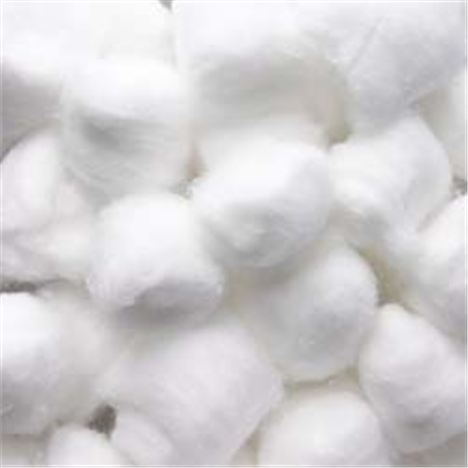 Soaks it all up, it does

This burger looks like it means business. It looks like they understand cheese as well. Good tomato chutney, Heinz available and fresh, crisp lettuce. It needs more seasoning in Gordo’s opinion, but check it first before you do anything; it’s made on the premises so the chef will probably have sorted that out by now. 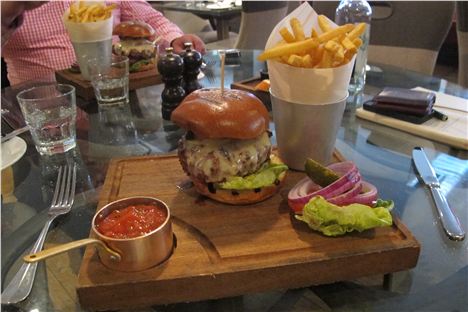 Another Northern Quarter mental institution - you should visit this place no more that once a week. The KFB (Kentucky Fried Burger to you and Gordo) looks like someone has deep fried a strip of your granny's carpet and laid it over a good looking, highly spiced and seasoned burger which includes the aforementioned marrow. Lovely mouth-feel, as they say in the trade. The grannies carpet is in fact a battered, deep fried, thick strip of bacon. Banging. 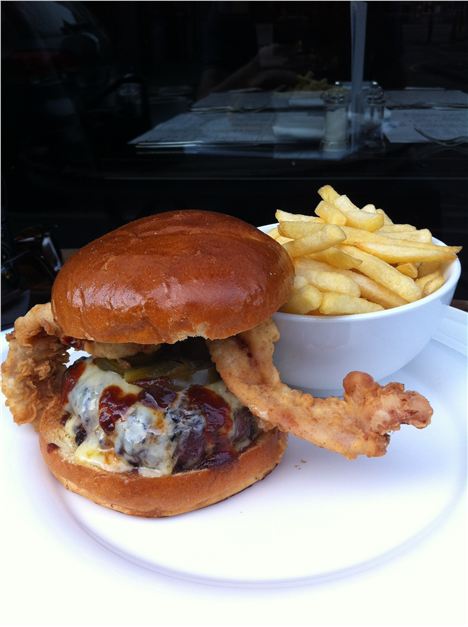 Situated nearly one floor up in Spinningfields, you could easily miss this American South eatery. A wolf in sheep’s clothing. The burger, if we were scoring, would definitely be in the final two. It looks a classic and is exactly that. Fantastic meat, which is best ground rump, boldly seasoned. Served in a classic seeded bun with ‘slaw and a mega pickle, it’s a Marlon Brando of a burger. 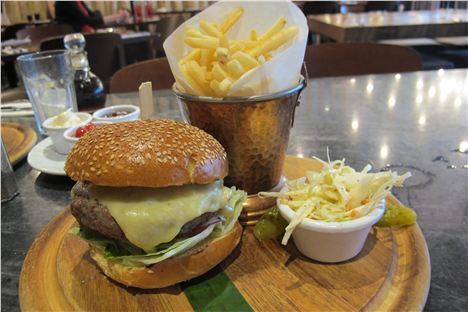