City Music Limited, the charity that owns and operates Band on the Wall, has secured £1.65 million from Arts Council England for its ‘Bigger, Better, Stronger’ expansion plan.

Submitted last year, the successful proposal will see main venue capacity increase from 350 to 500, improved facilities for education and community engagement programmes (including a rooftop A/V suite, allowing young people and education participants to collaborate with international touring artists on new work) and a small second venue for emerging artists. There will also be changes to the Picturehouse Bar, including a bigger terrace.

Improved archive facilities, meanwhile, will celebrate Band on the Wall’s rich history. Founded in the early twentieth century as The George and Dragon pub, the venue acquired its current name as ‘house musicians quite literally played on a stage halfway up the back wall to make room in the busy pub.’ Music eventually became the priority: as well as bringing some of the finest jazz, folk, blues and international music to Manchester, Band on the Wall was also a popular outlet for the local post-punk scene of the late seventies - hosting early concerts from the likes of Buzzcocks, The Fall and Joy Division.

In 1984, the venue became a registered charity under Inner City Music in 1984, with a mission to ‘promote equality and diversity through music and to bring leading artists from around the world to the stage - both at (its) award-winning Manchester venue and nationally, through touring programmes and trailblazing creative music projects.’

As well as the aforementioned expansion plans, Inner City Music also hope to restore the derelict Cocozza building - one of just a few remaining structures from the days of the Victorian Smithfield Market - which is located just behind Band on the Wall. The charity is in the final stages of negotiating the purchase of the building, and plans to install digital artworks in place of its windows; providing a ‘changing canvas for artists’ to tell the story of Band on the Wall and its surrounding area.

The next phase of the ‘Bigger, Better, Stronger’ project is the development of a music and heritage engagement programme. Partly funded by the Heritage Lottery Fund (HLF), this will focus on the music, song, storytelling and dance heritage of Manchester’s rich and varied migrant communities.

Jane Beardsworth, Director, North, Arts Council England, said: “Band on the Wall is a hugely popular music venue which appeals to local, regional and national audiences. It showcases the best in upcoming and established contemporary musicians and we’re delighted that artists and audiences will benefit from our investment in its expansion plans".

Allie Crewe: 'I know what it is like to suffer and to be silenced'
What you say
Read Next
● / Live / Gig 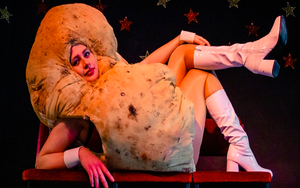