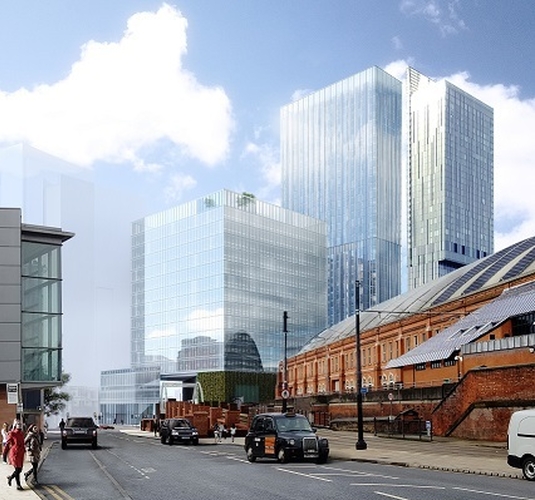 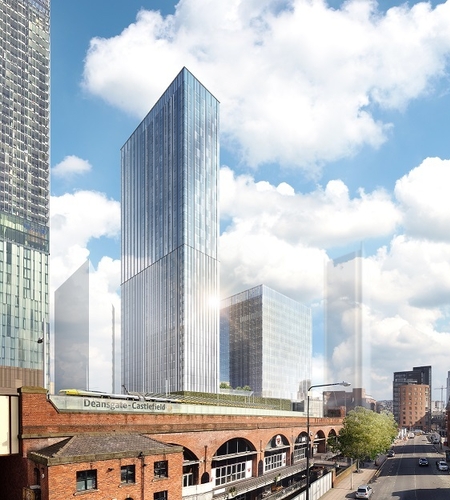 Addressing the MIPIM international property convention in Cannes, the developer will launch plans for a new SimpsonHaugh-designed skyscraper located on the former Bauer Millet site next to Beetham Tower – Manchester’s tallest building at 47 storeys (168 metres).

The lofty new 350-apartment tower will be accompanied by a 14-storey office building and ‘exciting’ new bar, restaurant and retail space, which the developer hopes will ‘bring people back into the arches and create an active frontage along Great Bridgewater Street’.

A key component of the scheme will be the removal of sections of the existing bridge on Great Bridgewater Street, allowing for ‘significant improvement’ to pedestrianised areas and ‘natural light down to street level, creating a more welcoming place’.

Meanwhile, new areas of public realm will include a new link from Deansgate train and Metrolink station to the city centre via Watson Street.

Commenting on the plans, Ask MD John Hughes said: “Our scheme will be a visionary development, something which only a few years ago, would have been almost impossible to imagine happening outside of London.

“The huge levels of investment we have seen into Manchester’s infrastructure coupled with efforts by the Universities to attract and retain talent has seen an upturn in graduate retention and consequently an influx of businesses looking to establish themselves in the city centre.

“In turn this has driven demand for new hotels, retail and leisure outlets - the development of which has boosted the city's economy.

"These factors mean it is now time for us to unlock previously hidden opportunities and the Bauer Millett showrooms is a strong example of this concept."

This latest scheme - a partnership between Ask, Manchester City Council, Transport for Greater Manchester and Manchester Central - joins equally lofty development plans nearby, including Axis, 10-12 Whitworth Street and Owen Street towers - the tallest of which will surpass Beetham at 64 storeys.

'Get your terraces out' City hospitality industry told
● / News