Wow, Cummings. What has this man done to deserve this? He does have a few problems to start with, beginning with the fact that he’s no oil painting. And he dresses like a dick. Others are that he’s hated by the media - and not just the left-wingers; it’s the people around Boris Johnson as well, which is odd. I had no idea who he was until a few months ago.

All leaders, great or not, have their advisers, from Elizabeth I's William Cecil to Tony Blair’s ‘Prince of Darkness’ Peter Mandelson. Most of them endured being stabbed in the back, metaphorically in most instances, actually in others. They are treated with distrust, paranoia, vicious jealousy and plain hatred. Many of them deserve it.

Perhaps we could fine him £30 and all of us get on with our lives?

In today’s world, that highly crafted hatred gets magnified by the press and not just a few underground pamphleteers. It’s because we have a free press; they can do what the hell they want. They’re not concerned about being thrown in the tower. That’s generally a good thing.

They do also have the most formidable communication tool kit in history: the Internet. And they have found that by shouting at the top of their voice, delivering big shocking statements they can get to a big, easily shocked audience. The more sensationalist they are, the more people listen and the value of their brand increases, which leads to bigger pay cheques. The exemplar is Piers Morgan.

Back in 1994, the Internet was being lauded as the true enabler of democracy, a future where everyone could have their say in real time. What publishers like me didn’t foresee were the dangers in giving people the tools to express their opinions generally unhindered, whilst not having to put their name to them.

I never realised just how this freedom of speech for the public would lead to such brutal, viscous and bullying commentary. The Internet has become an unpleasant place to be in some quarters. Twitter and other social media platforms allow some pretty dark souls to screech their truths, as they see them.

It would not be surprising to see a press report popping up on my phone, reporting that Cummings has been fired, stripped naked and made to do the walk of shame down Downing Street whilst his children, wife, siblings, parents, cousins and neighbours have been driven out of their homes and onto the street.

All because this man, according to Durham Police, ‘may’ have committed a ‘minor breach’ of lockdown rules. Now, given that the fine for definitely committing a full-blown lockdown breach is £60, perhaps we could fine him £30 and all of us get on with our lives? 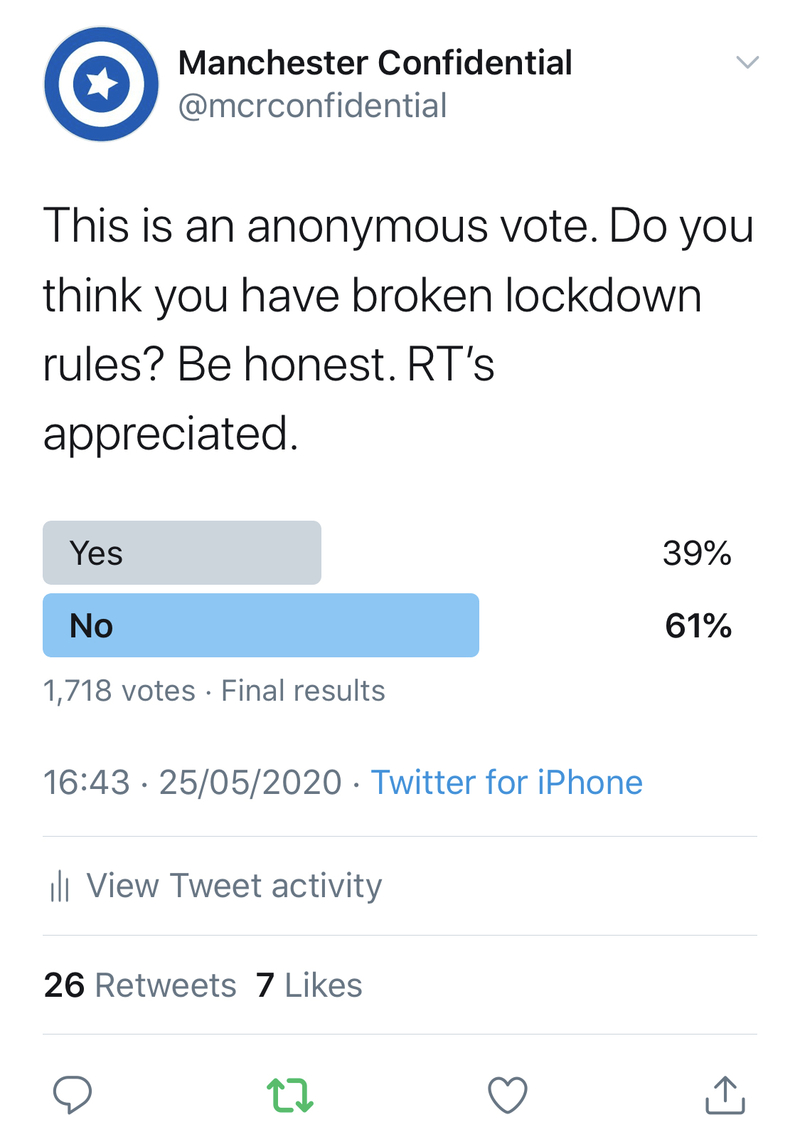 A couple of days ago Confidentials conducted an anonymous survey across our social media channels; there are over 300,000 followers altogether and they are a pretty mixed bunch. Just over 39% admitted that they had broken the lockdown rules; over 60% claimed they knew a member of their family or a friend who had.

Hmm. Maybe it’s time to revert to our Christian values, stop being led through the nose by Peston, Kuengsberg, Morgan and the rest and just use our common sense in these matters. ‘Let him without sin’ and all that. Issue a fine so the rest of us can shut the fuck up and get on with our lives. We will all be having an awful lot to think about at the end of July, and it won’t be worrying whether or not Master Cummings will be taking a toilet break.

For starters, house values are about to drop by 20%. If you are currently on furlough, you have a 30% chance of being made redundant on the 30th June, whilst the world is on the brink of a depression not seen for 250 years. It might be five years before you can afford to fly to Spain for a holiday and ten years before you can infest a beach in Thailand.

Hyper inflation anyone? Let that lot concentrate your minds until my follow up to this cheery note.

Have your say below. You’re entitled to it and this writer believes passionately in your right free speech.

Read: How are hotels going to have to change?