Except this goes up to 11. Here are the city's tried and tested suntraps for all your chilling needs

THE sun is out, the sky is blue, it's five o'clock and the only shadow is the prospect of going home.

Wee tincture? Just the one? Oh go on.

Here's our revised 2018 list of where's good for flora, fauna and just having a furtive few. Smoking outdoor areas or places with pavement chairs and tables are not included, that's too easy. But those places in the city centre who have made an effort are.

There are several new entries and some, like The Clove Hitch (which has closed) have gone.

Imagine how the old Everyman Bistro would have been with fresh air and sunshine instead of artificial light and ciggie smoke. Too much for some, admittedly.

But they (the first two) were always on proprietor Paddy Byrne’s wish list and it all came right when he reopened, three years ago, as the Pen Factory, in the basement of the Annexe next door. A lush new world opened up for the lushes in the shape of a delightful sunken courtyard. Directly reached through big iron gates on studenty Arrad Street and the more gentrified Hope Street at the front, it’s a firm favourite on balmy days and nights.

The self-styled gastropub, once run by our very own Mayor Joe Anderson, has changed hands more times than Stormy Daniels.

But if the grub doesn't grab you then aim straight for the back of the pub and the great outdoors. They will even reserve a table for you.

The USP is the sun, which beats down on the yard of flowers and herbs until 9.30pm in the height of summer. You will obviously be needing a pint of Sundowner with that.

As the courting spot of the late John and Cynthia Lennon, there is no more appropriate place to raise a glass to Liverpool Art College’s starriest couple.

Ye Cracke remains the watering hole for the mad, bad and dangerous to know, and its main attraction has always been its beer yard. A 9pm curfew operates and you will be shooed indoors after that. This means that unlike the characters who occupy it, Ye Cracke's residential neighbours don't get more and more disturbed as the night goes on.

Wine is sold by the tiny bottle after bottle. The most fancy cocktail is vodka and Coke. For the rest, a pint of Black Sheep and a packet of pork scratchings will have to do for your tea among the, er, herbs.

All things must pass, and while the Kazimier is gone forever, the good news is that its enchanting garden on Seel Street is there for the long haul.

Often copied, but rarely bettered, the Kaz Garden blossoms year round like a feral flower in this former car park. Now it’s been extended into Rat Alley, the passage that led to the now demolished club itself. For the nesh, there’s a mezzanine, a wood fire, lots of great food from a barbecue and a kitchen. And above us only bees, tens of thousands of them, from hives installed in the bell tower. 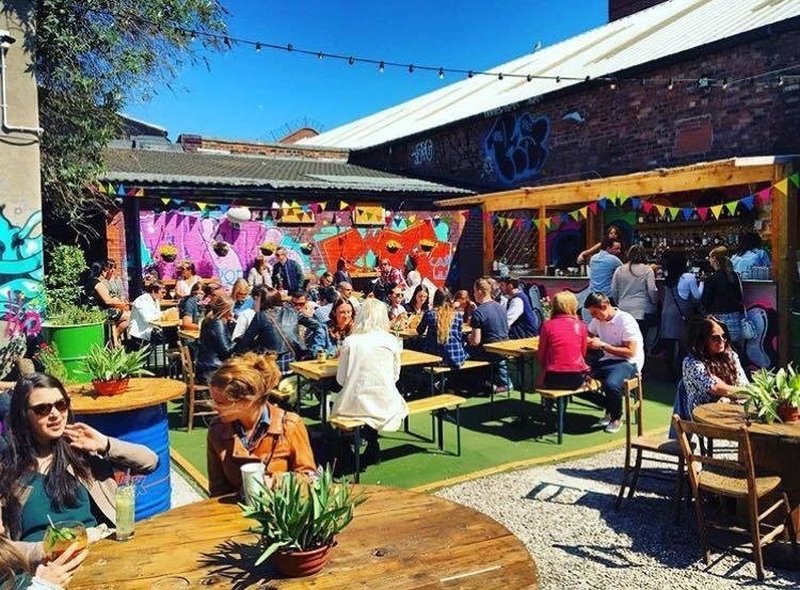 Nobody will ever think of looking for you in here. Tucked away down a narrow street in the shadow of the looming Anglican Cathedral, this urban oasis boast a heated greenhouse - and not the sort you find in a loft in Huyton.

Gin is the thing, like the New Bird Cooler with Sipsmith London Cup Gin, ginger ale and refreshing fruit, and the Rhubarb Fizz with lemon sugar, soda and rhubarb gin shakes, which you may have the next day.

And if all gin tastes the same to you, the good news is that the very wonderful Oktopus are taking over the kitchen this year.

The venue will be open each and every day through the spring, summer and into the autumn from midday - 11pm, depending on the weather.

If you like marvelling at the architecture of the waterfront and enjoying the finest sunsets this is one of the best vantage points in the city.

Now open seven days a week, from noon to 7pm, the garden, brought to you by Oh Me Oh My! is hosting weekly Goodness Gracious it's Friday nights and weekly yoga classes, so if that's your thing you'll obviously be on the farmers market lemonade.

For the rest of us, there's a garden-inspired cocktail and drinks list including summer cups, fruit spritz and home made G&T infusions to wash down a hog roast or veggie jackfruit bun.

Practically the only open courtyard in Liverpool’s business district, and therefore a babbling businesslike place to be on a warm early doors evening.

With its Yorkstone flags and hanging fuchsias, it does have a City of London air about it so pretend you are in EC1 by knocking back pints of London Pride, oh Isle of Man Okells then, on your imaginary fat cat bonus.

There was a time when Rigby’s Courtyard had it all to itself when it came to a downtown alfresco bevvie. But HUS arrived a couple of years ago in the brutalist Tempest building and reached for the sky. It’s all thoroughly hipster modern with its beehives, nesting boxes and barbecue. Then there’s that fabulous sweeping view down to the waterfront. Check for opening times.

This tinny terrace on the sunny side of Parr Street is south facing, for those dawn to dusk serotonin-inducing beams.  Tables and chairs in primary hues are sheltered by vast parasol and you can even hire it out for a do.

With views across the Liverpool skyline, the good folk in The Attic promise barbecues every weekend. There are also big speakers to pump tunes out to the punters.

This 6,000 sq ft warehouse space, designed by brothers Hugh and Howard Miller, has blossomed since it opened in 2014. The huge, imposing bar is one piece of impressive carpentry which has won awards. It lights like a starship after dark.

But the Hidden Garden is more than a place for the now-thousands of Baltic dwellers to get the beer in. They work hard to keep 'em coming: food and drink events, arts markets and gigs. This year the weekend barbecue is delivered by New Bird, a Liverpool based catering company from Joseph Mannion and Michael Carey, who claim to turn out the best burgers in the city. It's contemporary yet entirely in keeping with the area’s Scandinavian history.

You are "encouraged" to order a burger or the best buffalo chicken wings in Liverpool before they will give you any alcoholic beverages to consume in this sprawling green space that used to be the private preserve of an order of nuns. A statue of Our Lady still keeps a watchful eye over Liverpool's very own convent garden. Don't think you are amusing by asking for a Bloody Mary. You're not.