There is a crow. Something about a Dead Perch. There is mention of the Mersey and then a world tour.

But who or what is Tangerine NiteMare? And, actually, as the title of one fine album goes: What The Fuck Is Going On?

This poster, slapped on the front of a rather significant tinned up house in the Dingle, was spotted by Liverpool Confidential while out on an early weekend stroll.

It has been covered in graffiti by what appears to be a scrawl-hungry coach load of unsuspecting day trippers, stopping off at 9 Madryn Street, the birthplace of Ringo Starr.

Yet had they looked closely, they might have recognised the handiwork of another million-selling recording act of another point in time.

It is the biggest indicator yet that Jimmy Cauty and Bill Drummond, the partnership once known as The Justified Ancients of Mu Mu and The KLF, are indeed planning to make Liverpool, UK, their Trancentral outpost, just three months from now. 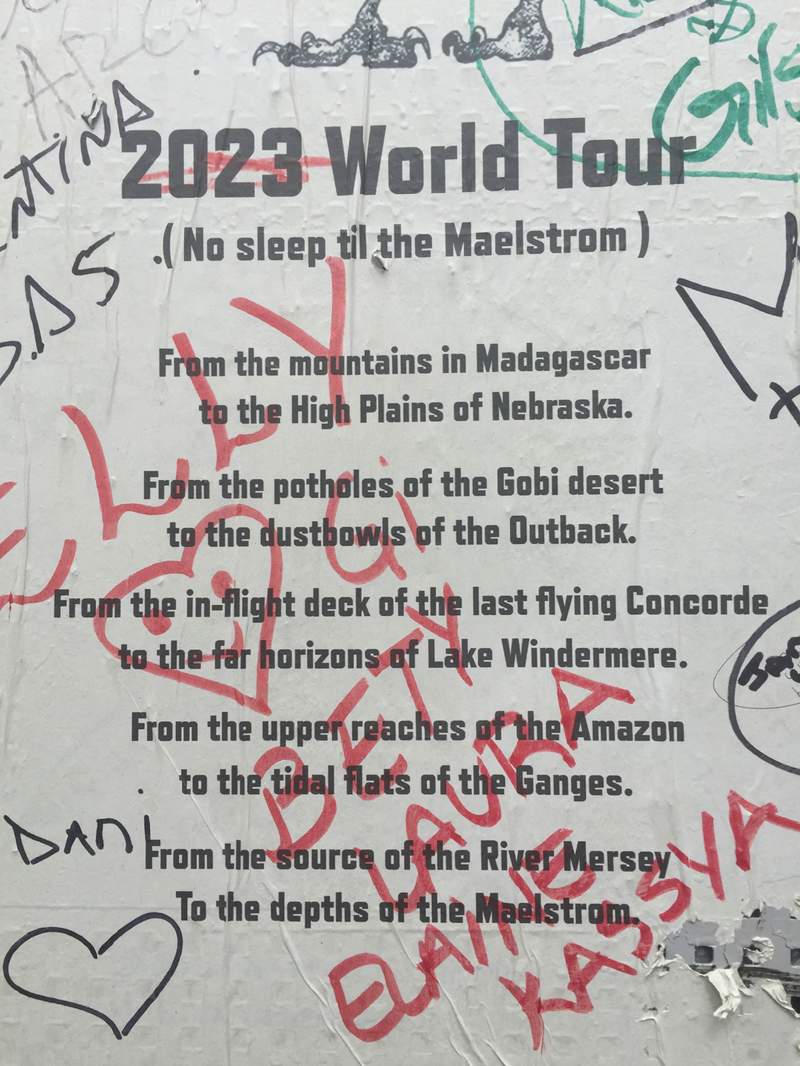 Right at the start of January, the Twittersphere and the media went wild when a tweet appeared from a new account, K2 Plant Hire (which was deleted after just three posts). It showed a poster, spotted on a wall in London, hinting that something was afoot from The JAMs after a silence that began in 1994. There would be no musical resurrection, the communique was quick to convey. No, it would be something else. A later tweet revealed a book, sort of.

Four months on, this latest Liverpool flypost points to a number that keeps coming up: 2023, the title of that very novel, penned by the duo and, yes, being published worldwide by Faber & Faber, on August 23.

This is a date weighted with significance among keen KLF watchers (and there are many). August 23, 2017, marks exactly 23 years since Cauty and Drummond achieved lifetime notoriety with the burning of £1 million on the Scottish island of Jura. Down the intervening decades that act seems to have lost little of its potency and a piece on the  subject in the Guardian last month was shared no fewer than 31,000 times.

The whys and wherefores have been endlessly debated by everyone but the duo themselves, thanks to a self imposed vow of silence which ends, you guessed it, this coming August 23.

From the mountains in Madagascar
To the High Plains of Nebraska.

From the potholes of the Gobi Desert
To the dustbowls of the Outback.

From the inflight deck of the last flying Concorde
To the far horizons of Lake Windermere.

From the upper reaches of the Amazon
To the tidal flats of the Ganges.

From the source of the River Mersey
To the depths of the Maelstrom.

So save the date. Cauty, Drummond and their legions of fans certainly have, in every sense.

What they have up their sleeves for Liverpool is for anyone to guess, but given who we're dealing with and past form...

Further reading from the archive: