THEY have been showing KLF documentaries in GCSE art classes - but don't go looking for them on any national curriculum.

ADP is so captivating. It fascinates art lovers and children alike

Down the road, in a senior citizens’ knit and natter group, something has got them in stitches. The ladies are proudly surveying the afternoon’s handiwork. No babies bonnets, just black insurgency berets; tea cosies patterned in the shape and style of police helmets; yellow cushions emblazoned with acid house smiley faces.

Children across four local primary schools, meanwhile, have been thinking hard. Each has a shoe box and, inside, Lilliputian landscapes are being fashioned: miniature figures inhabit scenes from their own worlds - as only they envisage them. Park Road, Windsor Street, Kelvin Grove, Princes Avenue, Upper Parlie, Lodge Lane, High Park Street, Croxteth Road and the Welsh streets.

Well only in Liverpool 8.

Into all this - and the reason for all this - a 40ft steel shipping container is about to rumble into town.  It contains a model village like no other and is the work of musician turned artist Jimmy Cauty. Cauty is one of the founding fathers of ambient house music and widely known as one half of pop’s anti heroes, the KLF.

Aftermath Dislocation Principle was the surprise toast of Banksy’s Dismaland last year when it was included - as something of an afterthought - in the Weston-Super-Mare art theme park.

Cauty paints smiley faces onto police riot shields. Banksy got in touch, wanting to put them on show.

Cauty said, "Come and look at this," and drew his attention to ADP, a kind of “here’s-one-I-made-earlier”.

It was thrown in with the deal, its layered, detailed subversiveness quickly capturing the public imagination, and it became a massive hit.

“Sometimes it’s a good thing when you can’t get what you want because the secondary thing turns out to be better than the first,” says Cauty.

ADP went down so well that they put it in a container, drilled peepholes in the sides and put the whole thing on a lorry. In typical KLF style, the word RIOT was scrawled red across a map of Britain. If your town or city lay on in the Sharpie zone, and had past form as "a place of civil unrest", you might expect a visit.

Thus, ADP arrives in Liverpool 8 next month, at Mill Street’s Florence Institute. It is almost exactly 35 years to the day the sun rose on the smoking timbers of the Rialto and the world discovered a curious new name on its atlas: Toxteth.

“It really is exciting to be bringing ADP to Liverpool,” says the Heswall-born founder member of The Orb who, in his KLF days, was selling more records than anyone else in Planet World. "Personally, I can't wait to be back."

Cauty was last glimpsed in Liverpool, at the Everyman, in 1995, with his KLF collaborator Bill Drummond. The occasion was a screening of their film, Watch The K Foundation Burn A Million Quid. It was a memorable evening and almost resulted in a riot itself.

In 2016, a different flame is flickering, but it's a flame all the same.

Vast, sprawling, dystopian and meticulous, ADP is a smouldering, smashed up waste of a fictional town called Bedford.

It is the morning after the night before. Something bad has happened in Bedford. It is up to you to decide how bad.

All we know is now it’s crawling with 3,000 cops and not a single soul besides.

Amid the strobe lights and sirens, riot police in high viz jackets take selfies and stand chatting in the Burger King in the same nonchalant way as you might find North Face-clad scallies.

Fred West is a poster boy on a billboard advertising the "neo-liberal" Guardian. Over there an occupied tent encampment stands deserted. An errant lorry has been left inarticulate after reducing a McDonald’s drive thru to smithereens.

Whatever crime has occurred it’s the police who are serving out the sentence in this diorama drama.

For theirs is a world where there is nobody left to control, where they have no choice but to turn on themselves.  Perhaps even more sinister, the policeman’s group-think is now roaming unopposed; free as a freemason.

Cauty’s container, which has been bankrolled by no public funding, is stopping at towns and cities noted for public uprisings and civil unrest. Nevertheless, Anne Lundon, CEO of the Florrie, wants Liverpool 8 to greet it with an extra special bang - especially given the anniversary.

So she has vigorously set about engaging the community. Now nobody on the Florrie manor is in any doubt about what’s occurring. That’s school children and also adults with their miniature model worlds; the knit and natter ladies with their subversive smiley cushions; the Kings Academy art students YouTubing the KLF.

"ADP is so captivating," says Lundon. "It fascinates art lovers and children alike and it's been an amazing opportunity to work with Jimmy and his team to develop a communtiy programme that is diverse and appeals to everyone regardless of age or artistic ability."

Friend of the Florrie, actor and activist Ricky Tomlinson is in on the act, and has pledged to create shoebox re-enactment of the Shrewsbury 24’s own, real life troubles.

And in the institute itself Tommy Calderbank is mounting an exhibition of 35 objects, one for each year since the L8 riots, which bear some direct testimony to the events of 1981.

Lundon says: “We don’t want people to just turn up and look at ADP, brilliant though it is, scratch their chins and then get back in their cars.

"We want them to come into the Florrie and look at all the work that’s been going on for months. As a direct result of ADP there are arts projects going on around here that will leave a lasting legacy."

She added: "The place is buzzing about it. One surprise is the level of interest shown by members of the local constabulary. They are really keen to have a peep!”

On the launch night, Friday July 8, Cauty will be getting some help from his friend BBC Radio 2 broadcaster Janice Long who will be supervising the DJ decks in the car park next to the container. A Q & A with the artist is planned. The whole community has been invited in for free and the Merseyside Force Commissioner, Jane Kennedy, is even rumoured to be coming along for a look.

There will also be a bar serving drinks. Miniatures of course. The devil, as they say, is in the detail.

Note: ADP opens on the same night as The Liverpool Biennial.

The Liverpool Biennial has nothing to do with ADP. 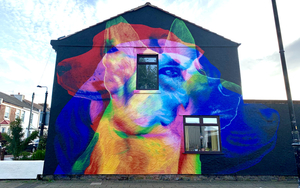