IT would appear hotel guests have started to feel guilty about pilfering mini toiletries and as a trade off, are leaving behind books. But not just any old books.

7,000 copies of E.L. James’ ‘Fifty Shades’ books have been recovered from Travelodge hotel rooms across the country.

Cleaners at Travelodge, the budget hotel chain, have been noticing a literary pattern among the 21,786 books left behind in 36,500 Travelodge hotel rooms in the last twelve months.

Fifty Shades Of Grey was the top book left behind, suggesting we’re a nation ‘escaping reality to delve into a fantasy world of eroticism’ according to Travelodge. Or perhaps just a load of simpletons. 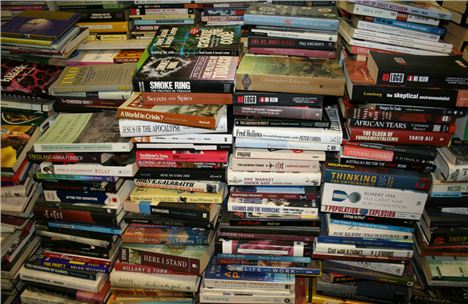 Outside the top three, which were all trilogies, the only book to enter the top ten was The Help by Kathryn Stockett taking tenth place.

Previous number ones have included Katie Price’s autobiography ‘Pushed to the Limit’, however no celebrities or chick lit made the list this time. Or maybe people like to save those absolute classics for a future re-read...

2. The Girl With The Dragon Tattoo (Stieg Larsson)

3. The Girl Who Kicked The Hornets’ Nest (Stieg Larsson)

6. The Girl Who Played With Fire (Stieg Larsson)

15. The Brightest Star In The Sky (Marian Keyes)

Other Interesting Facts About Books Left Behind...

- 7,000 copies of E.L. James’ ‘Fifty Shades’ books have been recovered from Travelodge hotel rooms across the country since its release earlier this year

- Hotel staff in Essex, Newcastle and Liverpool recovered the most copies of ‘The Dukan Diet’

- Hotels in Central London, Birmingham and Scotland had the most business books left behind

- Travelodge hotels in London , Edinburgh , Cornwall and Cardiff had the most copies of English Phrase books left behind

- The hotel manager at Peterborough Travelodge found a briefcase of superhero comics – which were left behind by a CEO who stays at the hotel regularly.

- Hotels in London , Manchester , Birmingham , Edinburgh and Liverpool had the most e-readers left behind

- All books left behind at Travelodge hotels that are not claimed within three months are donated to Cancer Research UK charity shops across the UK .