The Good, The Standard, The Ugly: Dial House, Salford

Category: Joyously, unforgiveably, charmingly ugly. And part of a magnificently ugly group of distinguished grimness. I sort of love them for that.

So where is Dial House?

It's on the Salford bank of the River Irwell between Victoria Bridge and Blackfriars Bridge. It faces the Renaissance Hotel on the river side, and stands on Chapel Street, land side. 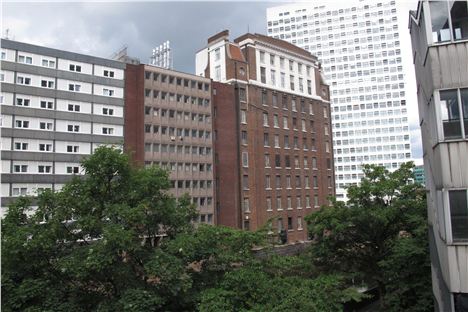 Dial House - with temple atop

When was it built and by whom?

I really have no idea I'm afraid. The architectural guides I possess, and they are legion, ignore it. All I can say is that since I can see the ground cleared for the building in an aerial photograph of 1926 it must have been built sometime shortly after that date to the design of a child on a slate with a wonky piece of chalk. I reckon this child always came last in art class.

Come on, seriously, who was the architect?

I really don't know. I need to spend hours digging away in a Post Office archive somewhere because all I know is it was built as an exchange for the Post Office. They needed a major new facility for the burgeoning telephone network. The name is a pun on its use.

That aside, Dial House is an un-building, a vampire on the city architectural scene. Nobody wants to know who designed it, no design practice wants to claim it. It is so beyond the pale there are no images on Google Images of this monster building. Can you imagine?

It's huge, heroic in scale. It has one of the biggest foot plates of any central Manchester and Salford building, occupying an area bigger than House of Fraser/Kendals.

What about the way it looks?

Ah it's wonderful, so mad and bad it makes me laugh everytime I see it.

There are ten storeys on the river side, at least eight on the Chapel Street side. The style at these two ends is mostly in the butch Classical style of the twenties and earlier thirties, but handled brutally, almost angrily, as though the architect wanted nothing to do with it, but his hand had been forced. Bizarrely there is a portico - more like an elevated Roman temple - on the river side at the ninth and tenth storeys. 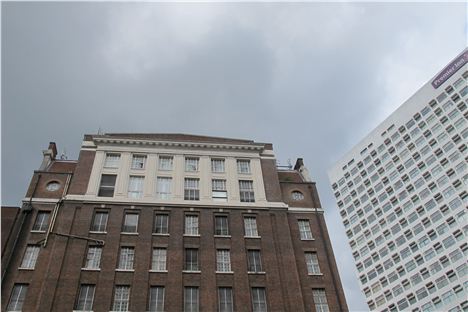 Dial House, on each side of the temple bit is a cute tiled roof that you might find in any middle-class suburb

The architect even put little Queen Anne-style, tiled roofs on each side of the elevated Roman temple. Meanwhile on the north and south faces, which couldn't be seen when built originally as buildings masked those elevations, there's a grid of concrete and glass as functional as you like with glass bricks as well. Some parts of the walls are just sheer, blank painted concrete. The architect might as well have done the whole thing like that rather than messing about with those Classical details but then he was a victim of fashion. And he was clearly angry. 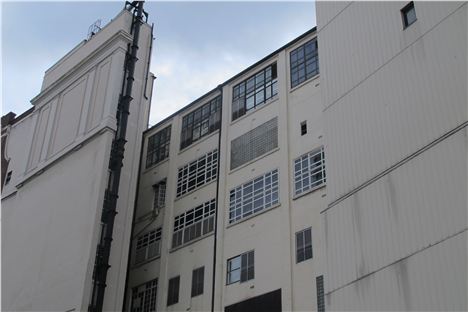 Oh yes, oh my yes. The very crescendo of craziness consists of mini-bits of Roman temple hoisted nine storeys up that are about half a metre thick and appear to do nothing at all. I love our anonymous architect for doing that. I want to thank him. To make matters worse someone more recently installed aircon that resembles a rocket-launcher - see the main picture at the top of this page. 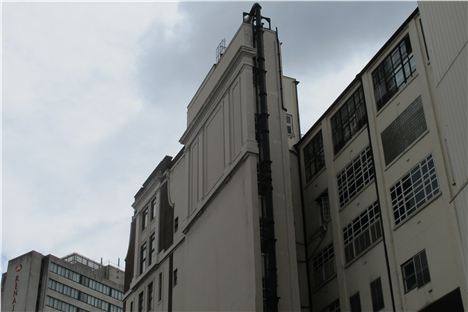 The skin deep Roman temples on the side elevations. Bless

Do you know anything else about the building?

It still hosts the Post Office's successor telephony company, British Telecom. The latter also owns the more modern seventies buildings, joined on to the south of Dial House. The footings by the river here support a pipe jumping from the wall with an endless stream of water flooding from it. Very nineteenth century. Very strange. Maybe, and I'm winging it here, it was an outflow pipe from a pump draining the Guardian Exchange Tunnels. Draining these into the River Irwell makes sense, the river is naturally the lowest point around the city centre. 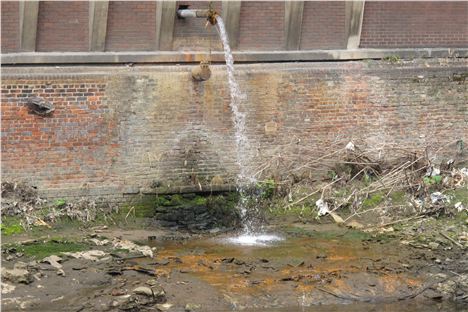 Dumping this into the river, is it legal? Or does it hint at a deeper secret.

What are the Guardian Exchange Tunnels?

They were the communications system built in the fifties in case of atomic attack by the Soviets. The Manchester and Salford network went as deep as 180ft and was controlled from the main exchange building on York Street (now New York Street). Dial House was the destination for an underground spur more than a mile long. Some tunnel. BT now use these redundant chambers for cabling. Almost as soon as they were built they were useless as they weren't deep enough for nuclear attack.

There's a good eyewitness account on the Mancubist blog from a man called Barry: 'I visited Guardian in the mid '70s when I was an apprentice in the GPO. We entered the tunnels via the cable chamber in Irwell (i.e. Dial) House, Chapel Street through a vertical shaft via staggered galvanised steel stair cases secured on criss-cross platforms of the same material. It seemed to take ages to get to the bottom and then we walked through signposted tunnels (tubular, about seven feet in diameter, with a flat bottom) with cable bearers on either side. We finally made it to Piccadilly and surfaced in the Telephone Buildings in York St. An exciting experience.'

You want to go down there?

Yes. I want to publish a polite request to BT about Dial House.

Dear BT, could I have a tour please? Dial House is one hell of a massive building and I would love to pry into its inner recesses, maybe take a sneak peak down into the Guardian Exchange Tunnels.

Oh and I reckon you should sell that top Roman Temple bit for a special discount to somebody who has at last pointed out your fine building in Manchester's finest magazine - could I have it way below market value, say, about £40.

Proper Gotham City that top Classical deck. It'd be great to sit on the roof there and plot against the inevitable return of that insufferable goody-two-shoes Batman. 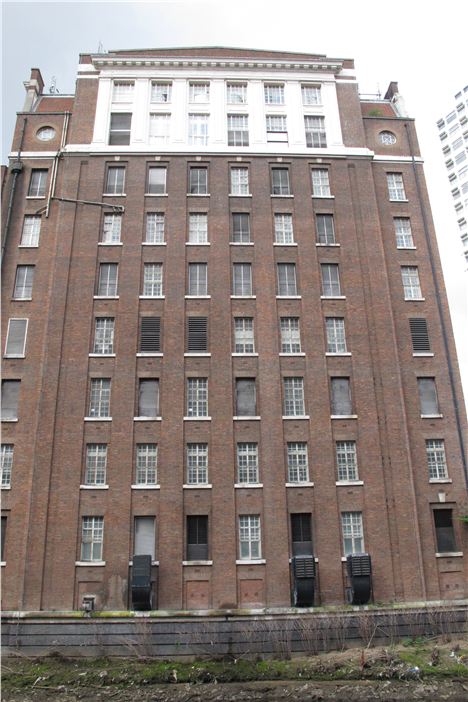 Look at the sheer scale of the thing here 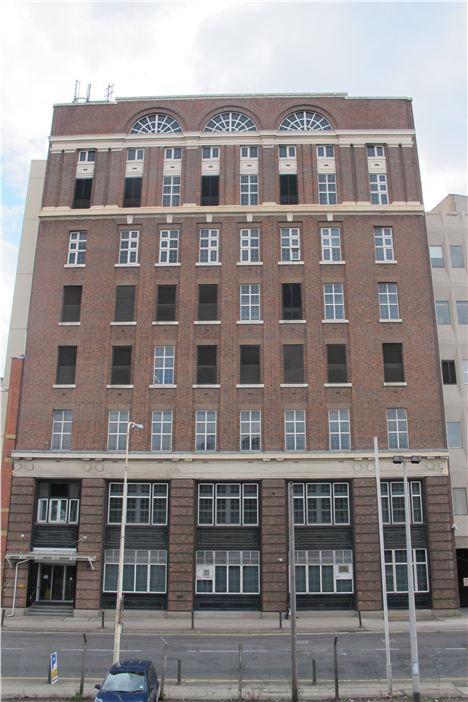 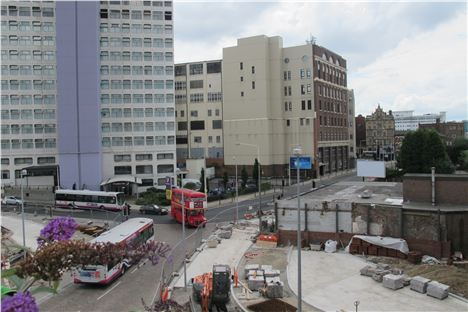 Dial House from the north showing how later demolition revealed its blank side, bizarrely as I took this picture a bus that could be from the 1930s was turning right 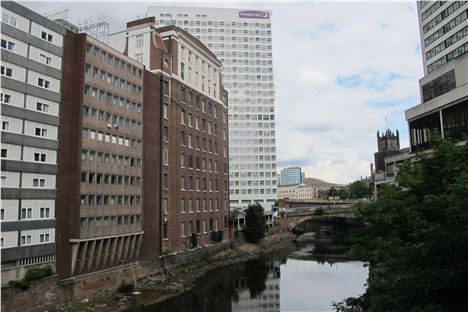 Dial House, and that overflow under the vicious seventies neighbour