The Good, The Standard and the Ugly: The Square with No Name

What?
The Square With No Name?

Right you are. Where is ‘The Square with No Name’?
Don’t know. You can’t find it on any map.

Ha, ha, indeed
It’s where Bridge Street, King Street West and St Mary's Parsonage come together under the Inland Revenue Building and just next to the Masonic Hall. The fourth side of the square is Motor Street and is about twenty metres long.

Masonic Hall? Was the square created by men with one trouser leg rolled up and careers in the Police?
No, I guess it was created by men with clip-boards in the Planning Department. By accident – I reckon. This is all guesswork as I can’t find any mention of the square in Central Library. Then again not having a name makes it a bit difficult to look up.

When was the Square with No Name created?
Sometime in the fifties. It’s probably a shaven off remnant of the Manchester Plan of 1945. There was WWII bomb damage in this area but it doesn’t seem to have affected the site of the future Square with No Name.

What was the Manchester Plan of 1945?
It was a wholescale re-imagining of the city centre and suburbs: tatty Victorian buildings would go (just a few would be spared – although not the Town Hall), replaced by boulevards and sleek modern buildings. Manchester would bow down to the Age of the Car.

Even the Town Hall might have gone?
Yes. Let me explain. Broken as a superpower Britain found it hard to face its past. A dirty, bombed, Manchester being the first urban centre of the Industrial Revolution was one of the worst for avoiding a glance in the mirror. It was probably too painful, the future was clearly going to be more uncertain with less global punch.

Better then to wipe all that away, get rid of the old stuff, with its dodgy politics and Imperialism. Make a fresh start. 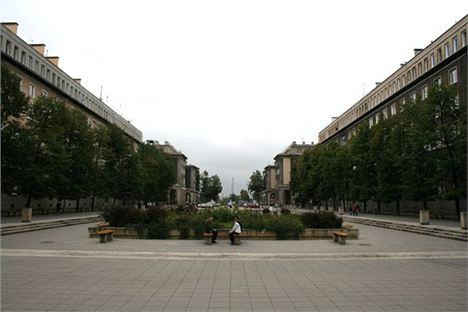 What’s this got to do with the Square with No Name again?
The area here was supposed to be completely cleared. Salford Central Station just over the river from the Square with No Name was going to be a massive transport interchange. The area would have been filled with new buildings leading down to the River Irwell which was to be culvetted and made to disappear under a dual carriageway. The river was still smelly with industry so it seemed like a grand idea – hide it rather than clean it. On the illustration below, Bridge Street is on the extreme left, with the Irwell carriageway curving round the lower middle foreground. You can spot buildings which would have been 'spared' such as John Rylands Library and Sunlight House. Anyway back to the Square with No Name: it may have had a title at one time. 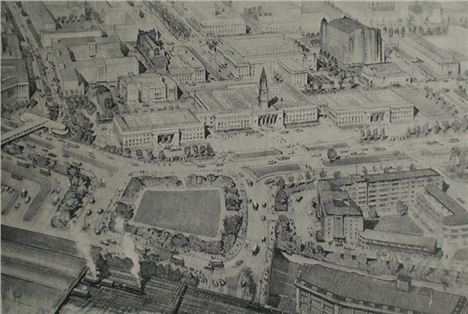 What was that?
Albert Place. This was the last part of Bridge Street before the bridge to Salford which is called Albert Bridge. But that doesn’t seem to have matched the site of the Square With No Name exactly. In one of the old photographs you can see some of the businesses and buildings that disappeared post-war: Grundy’s Rubber Products, The Old Curiosity Shop, a School of Antiques. Odd sounding business that last one. A famous shop did open here in the sixties when the Square with No Name was in existence. That was Edwardia.

And why was Edwardia famous?
It was bi-partisan, it crossed the dividing line, it was the clothes emporium of two football fops: Mike Summerbee of Manchester City and George Best of Manchester United. You can see it pictured here, with Regina, the womenswear bit. The site is now Crazy Pedros with Mojo above. There have been other nick-names for the area too. 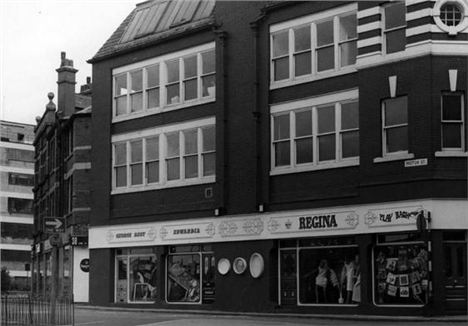 Go on
With the down draught produced by the splendid Albert Bridge House by EH Banks from 1959, it was christened ‘Windy Corner’. Duncan Measor in his classic gazetteer of the late eighties, Twin Cities, described the place as the ‘great skirt-lifter, hat-remover and umbrella-destroyer’. During the 'swinging sixties' the wider area was known as 'the Village'. A tad different in character from today's more famous Village.

Should the Square With No Name be named?
Maybe. We could have a competition to give the place a proper title. Since it’s so close to the the People’s History Museum, we could mark Manchester's radical movements. Radical Square anyone? Union Square? Liberty Square? Or maybe, The Nameless Square to the Anonymous Dead who Struggled for Peace and Freedom. Something snappy like that. 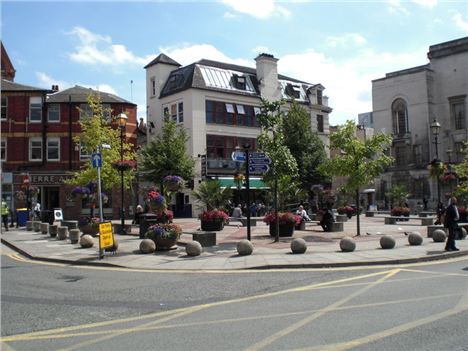 The Square With No Name