Bike theft. Is it something cyclists should see as inevitable?

I walked past at first, puzzled by a nagging sense of unease. Alexandra Park seemed normal. Trees gently swayed in the breeze, a man and child walked by hand in hand, a car buzzed along on the main road. The only jarring note was the post lying on the floor with its little notice about dog control orders. It seemed familiar.

I still stand by the statement that cycling in Manchester is easy. Well, it was when I had a bike.

Then it struck me.

My bike had been locked to that post. It had been secured with a Kryptonite lock you need military grade hardware to crack. A person, or persons unknown, had pulled the post out of the ground and stolen my bike.

I stood stunned for a second. It was an unreal situation. I remembered years before when I’d had a bike stolen at Cardiff University. That had been a straight forward wire-clipping of a plainly inadequate lock. This theft was just preposterous. Ridiculous. Somebody had pulled a post out of the ground, ripping it from the earth, taking the concrete which had secured it. I confess I let fly a shocked laugh. It seemed surreal.

I hadn’t even left it for very long. I’d been doing a pleasant activity too, conducting a tour of Alexandra Park and Whalley Range, passing the old Clifton Grange Hotel where Philomena Lynott had been the landlady. She was the mother of Phil Lynott of Thin Lizzy, whose song, The Boys Are Back in Town had been written about that Manc band of criminal associates known as The Quality Street Gang.

Now crime had struck me. Sort of ironic, I thought, as I gazed at that post and in my mind’s eye saw it slowly right itself complete with my bike attached, like a movie played backwards. As I trooped to the police station to report the theft I wondered how nobody had noticed somebody waggling a post from side to side, maybe more than one person. But then for many people the mantra is pretend you haven’t seen anything, don’t get involved, folk as products of the alienated twenty-first century.

Manchester’s central areas are high in the unholy league of bike theft in England and Wales, 29th out of 106 sample at risk postcodes. There are 1.9 crimes committed per annum per 1000 workday people. This is wildly under that of Cambridge which has seven such crimes committed by the same measure and less than many places in London. Manchester’s theft rate is still higher than the national average at 113%.

Anybody here who cycles knows the risk. That’s why locks have become stronger and you see bikes with multiple locks, one circling a supposedly fixed object and another around wheels to stop the latter being unclipped. That’s why for regular use people often use second-hand or old bikes. Earlier this year I chased a beggar down London Road after I saw him nick a bike from outside Piccadilly Station. Unfortunately, bikes are faster than two legs.

I posted a picture on social media of the fallen post because what else would I do in this age of sharing your every moment? The comments were the usual mix, of sympathetic and insane. I liked Pete Swift suggesting people crowdfund me a new bike, but had to point out that crowdfunding should be for community gardens and the like, something for the public good rather than private gain. Or maybe we could crowdfund more cycle racks for Alexandra Park.

Stuart Hudson and Chris Paul highlighted something that I hadn’t even known was an issue, that criminals ‘often uproot posts and put them back so they’re easier to lift out’. The same with barriers as there ‘is one like that on Mount Street. And they cut and sheath sections of (cycle) hoops. Check poles and barriers before chaining’. Crikey, who knew?

The most logical opinion came from Morgan Leahy with, ‘I don’t have a bike in Manchester, resulting in my never having my bicycle stolen. Studies show that people with no bicycles have the lowest incidence of bicycles stolen.’ That’s an infallible statement. 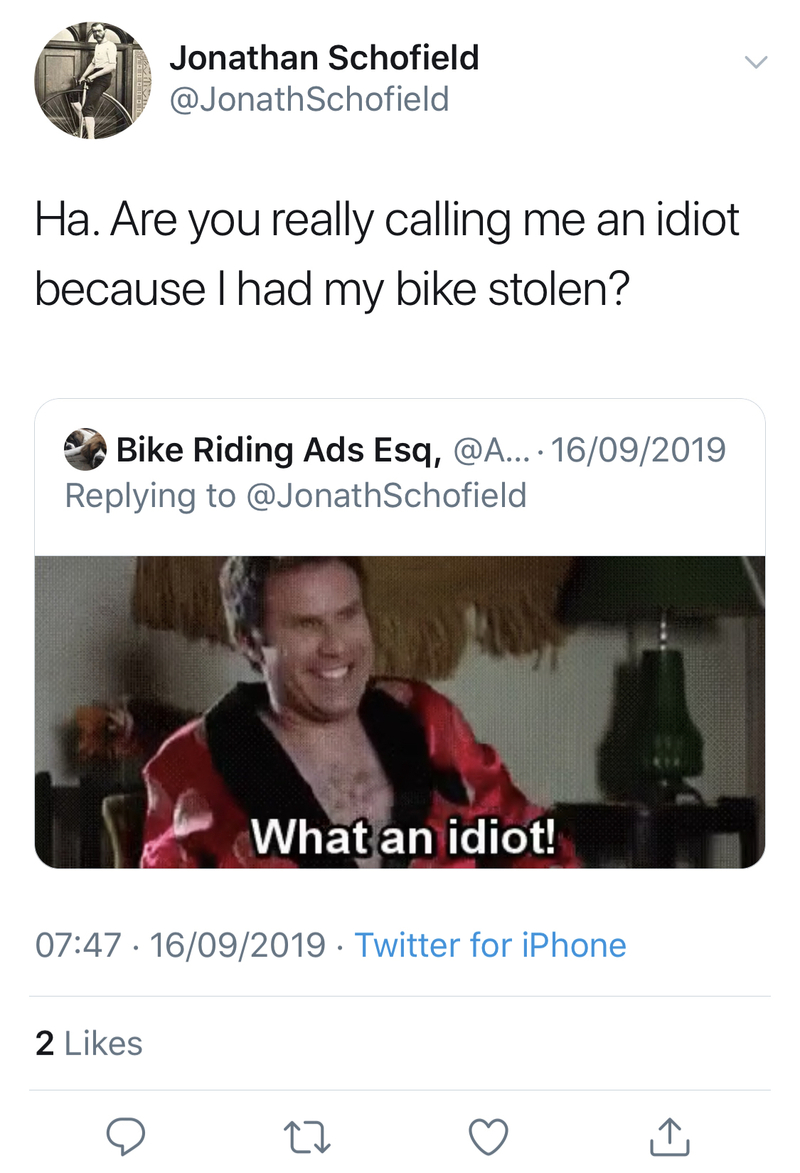 Then there was the anonymous chap ‘Bike Riding Ads Esq’ who called me an ‘idiot’ for locking the bike. Ah the internet, where anonymous cowards, always anonymous, feel free to gloat over people’s misfortune. Bless ‘Bike Riding Ads Esq’ man, who is the proud father of two children he names on his profile, he was really just angry about some words I’d written a couple of weeks before about how I find cycling in Manchester easy. He thought I deserved my Alexandra Park fate because I had disagreed with him. He came across as a blustering Boris, with his meaty red-face, veins popping at the dispatch box in the House of Commons, after the Supreme Court had told him he'd been wrong.

That previous contretemps had culminated with one angry gentleman thinking I never cycled in the city and offering to give £50 to charity if anybody had seen me on a bike, only to get an immediate reply from another man to say he saw me riding most days. Oops, there goes half a ton.

I still stand by the statement that cycling in Manchester is easy.

Well, it was when I had a bike.

What confuses me about the whole theft is the bike wasn’t some state of the art beast of a thing worth £3,000. It was a good one but second hand, needed new brakes and there was a problem with the pedal spindle. The lock was probably worth as much as the machine. Thus, given the excess it wasn’t even worth claiming the value of it back on insurance. Still, all theft feels like a personal violation, an assault on one’s normalcy and a tiny crack in the fabric of your own little universe. It's so tediously inconveniencing as well.

I still think Alexandra Park is a lovely place and will visit frequently. City dwellers should never be ruled by fear.

I suppose, given the nature of the theft, an uprooted post with a notice, and the reaction, you might say my experience was a sign of the times.

Thanks to Stuart Grout for the top photograph here, taken from Wikimedia.