Stain on the city - why are Manchester's pavements so dirty?

Jonathan Schofield reports on the mess damaging our reputation

With all the sunny weather lately the city centre has looked superb. Well, almost. There have been two problems.

Number one problem, of course, remains the menacing beggars (as opposed to the genuinely homeless) who need to be removed from the streets, especially when they openly buy/take drugs, curse and soil the back streets. Oh how cruel I hear some of you cry, but when you walk the streets day in and day out compassion fatigue sets in, believe me.

The other problem seems easier to solve, but is something that has been pointed out to me multiple times by guests I've taken around the city in recent weeks. These guests come from the USA, Belgium, Germany, France, Brazil, Japan and within the UK, from Cornwall, Scotland, Northern Ireland, Yorkshire, and they nearly always mention one thing...

The shocking state of our pavements. Manchester’s pavements are a mess of coffee, food and other unmentionables. Everywhere. On all the pavements. This is a ridiculous and needless embarrassment. It makes the city look like it cares nothing about aesthetics for its citizens and visitors. It makes it look like Mancunians care nothing for tourism despite the importance of the sector.

As Confidential pointed out last year: ‘Recent official figures prove the importance of tourism to modern Manchester. Greater Manchester’s tourism sector is worth £7.9 billion and supports 94,000 jobs. The region attracts 119 million visitors per year; 11 million that stay and 108 million day visitors. This means it’s the largest key sector in the region, outstripping others such as the financial and professional services, life sciences and creative, digital and tech.’

So, given that, we asked the Council how frequently the streets get a deep clean, rather than a brisk litter pick.

The first answer we got was: ‘In addition to our routine daily street cleaning city wide, we schedule annual 'deep cleans' for key streets, working with city centre stakeholders to schedule the most appropriate time for these to take place.

'We have a rolling contract with the Ramora company to do this deep clean across the city and Cross Street is included in the programme. We also ensure that event organisers carry out work to return city centre event spaces to a clean state after their event has ended.’

Right, ok. But when was Exchange Square last deep cleaned, for example? The reply was ‘Exchange Square was last jet-washed by Ramora in January 2018 (this was the last scheduled annual deep clean).’

Don’t council officers walk the same streets as the rest of us?

That seemed a long time ago. It appeared we were asking the wrong question. So we tried again. We asked: What is the frequency of deep cleaning on city streets and squares?

The council said: ‘There is an annual deep-clean for key city centre streets. (Side streets are) not included on this list, however, we do respond to all reports of particular problems, investigating and taking actions where required.’

Oh dear, now we have it.

Exchange Square won’t be deep cleaned again until January 2019, unless a complaint is registered by, presumably, a business or a member of the public. Crazy stuff. Don’t council officers walk the same streets as the rest of us? Maybe they are too busy looking up at the fine architectural details of Manchester buildings?

Anyway Confidential would like to report a problem of staining here... 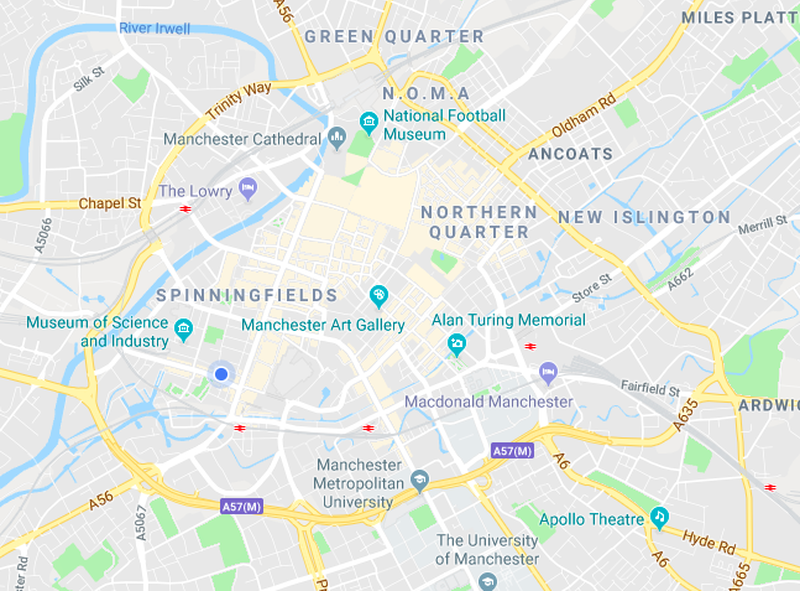 Yes, we'd like to report a problem of staining on all of the streets in the city centre.

Joking aside, if the council can’t attend to this ugly besmirchment of the city centre environment – yep, cuts, austerity and all that – then maybe they could do something else.

Maybe they could offer a rates discount to street facing businesses so that they could then buy steamers and clean the pavements outside their premises themselves. The council might then pass a by-law that requires businesses to clean to the pavement line outside their doors. The council could then dish out fines to businesses that fail to do this. This would help increase business engagement with the city and boost civic pride.

People who have been on holiday to countries such as Spain and Italy will have seen bars washing the pavements on which their terraces sit each morning. With the heady and welcome growth in Manchester tourism it’s about time we did the same, or, failing that, it’s about time the council picked the pace up in deep cleaning city streets.

We really have to take local, national and international tourism seriously if we want to compete with other European cities, let alone other British visitor destinations.

Like this? Then how about... A greater problem: seven hours in Piccadilly Gardens with Operation Mandera.