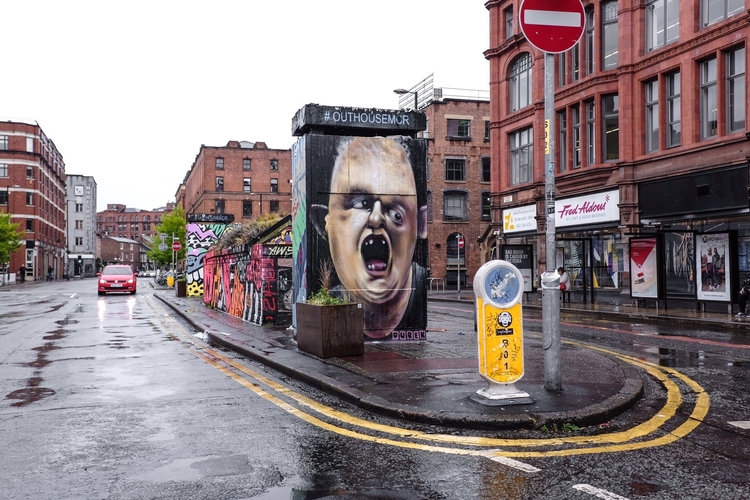 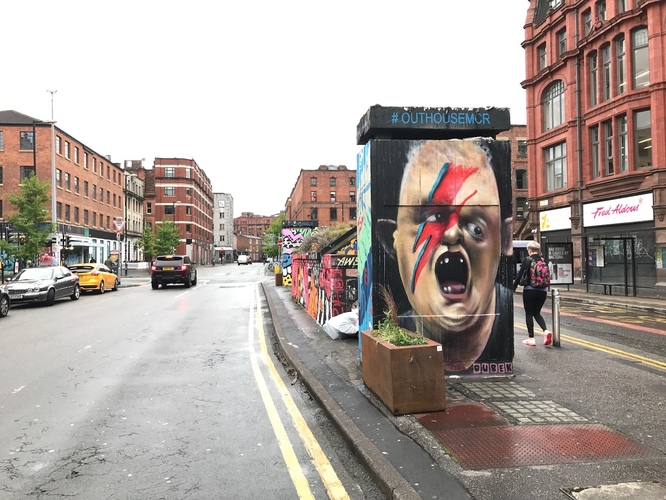 Removing David Bowie from his thirteen-month pitch in Northern Quarter's Stevenson Square was never going to be straightforward.

On the one hand, the portrait of The Thin White Duke - painted by French-born graffti artist Akse in April 2016 following the icon's death in January - has become a much-loved part of the NQ furniture and experience, a tourist attraction even.

On the other, there's the transient nature of street art. For work commissioned at #OuthouseMCR - the former public toilet on Stevenson Square and electrical substation on Tib Street, given over to street artists by CityCo in 2010 - is only ever supposed to last a few months, before a new artist seeking exposure arrives and slaps up another layer.

Though come Monday 15 May and Ziggy had flown, only to be replaced by another cultural behemoth of startling appearance and towering presence... Sloth from eighties cult classic The Goonies.

Needless to say, some of the Star Man's star fans weren't overly keen on the redesign by street artist Qubek - who reportedly produced the portrait in under 90 minutes during a downpour.

'Why did they replace Bowie?' asked one via Facebook. 'As a Brixton gal who used to live opposite the iconic Bowie mural, I am NOT impressed at all.'

'I wasn't done with Bowie yet!' howled another, 'how is this ok?'

'The irony which appears to have escaped critics, of course, is that Bowie was not just an artist who built a long career on reinvention, but one who turned it into an art form. In which case, he'd have probably wholeheartedly approved of the old toilet block's metamorphosis.

Though the artist, clearly aware of the impending backlash (and canny in the ways of social media), had held back one special modification for his detractors, painting Bowie's iconic Aladdin Sane thunderbolt right across Sloth's mush mere days later.

Elsewhere, the council are said to be considering a move to replace the Prince Albert monument in Albert's Square with a fifteen-foot gremlin.

Castlefield Viaduct: What to expect from landmark green space
What you say
Read Next
● / News & Comment