SAMANTHA BRICK has caused a real storm over the past few days, hasn’t she?

Her article entitled: ‘There are downsides to looking this pretty: Why women hate me for being beautiful’ has over 5,000 comments on the Daily Mail Online, and reached over 1.5 million hits in 24 hours.

But as hysterical ranters fled to the site to post their disgust at Samantha’s overinflated self-image, bosses at The Daily Mail were rubbing their hands with glee.

“It’s hard to argue that Samantha wasn’t expecting some kind of backlash to her latest piece, after all, that’s what’s she paid to do, incite backlash.”

He followed it with the tweet ‘Multiplied by the number of ads = over 100k in revenue for Daily Mail.’

Now, are we really expected to believe that The Daily Mail just happened to stumble across this piece of editorial gold, weeks after Kony and Invisible Children brought to light the true potential of social media and it’s powerful ability to spread viral videos (or articles) at an astounding rate? I don’t think so.

It's safe to assume that this was no accident. It was a calculated piece of marketing strategy, expertly executed, and everybody fell for it.

But still the question remains: Did Samantha Brick take one for the team? Or was she just too foolish to see she was being exploited?

Let’s looks at the latter for a second.

Samantha has previously written articles for the ‘Femail’ section of The Daily Mail titled: ‘Why my husband says he’ll divorce me if I get fat’, ‘How TV is run by sexist pigs who only want one thing (and it’s not ratings)’ and ‘I use my sex appeal to get ahead at work…as does ANY woman with any sense.’

These types of articles can attract anywhere between 80 to over 900 comments from the kind of furious Daily Mail Online reading types that ensure the website has by far the biggest traffic of any UK news site every year.

So it’s hard to argue that Samantha wasn’t expecting some kind of backlash to her latest piece, after all, that’s what she's paid to do, incite backlash.

Perhaps she was simply getting on with her normal working day, and just got lucky with a real flyer, one that just took off, and now she has the unfortunate circumstance of dealing with abuse at a much higher intensity than she is used to?

Alternatively, it’s possible that bosses at the Daily Mail took a close look at Samantha and were overcome with potential. Think about it - she is perfectly placed for this kind of article. If she was completely hideous, it wouldn’t have worked, it’d have looked like too much of a parody. It would have looked like this.

But Samantha is not hideous. What she has though, are the absolute bare minimum requirements to be whistled at whilst walking past a building site. She is a woman, with blonde hair, who wears makeup and high heels. So it is plausible that she does get some minor attention from men in the street, and could therefore be convinced, with enough time and effort, into thinking she looks like Pippa Middleton.

But that’s not all. Samantha has also got Pascal – her balding, handlebar moustache’d, pirate-looking husband, to not only boost her own disillusioned self-esteem, but to reinforce the reality of the league she is really playing in to the commenting public, filling them with rage. 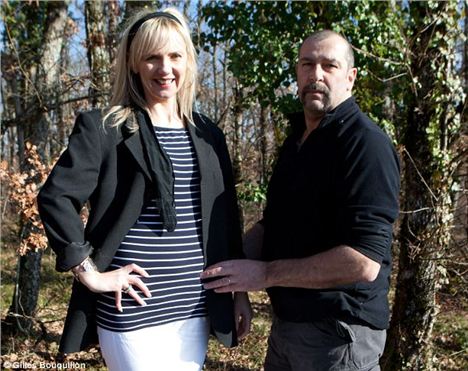 Samantha Bricks and her husband, Pascal. Pascal is on the right of this photograph.

I can see Paul Dacre’s eureka moment, when he realises he’s just found the perfect woman for his hundred grand scam, punching the air in a fit of excitement. Now all he has to do is convince her of her own beauty, and how everybody hates her for it, before watching the money roll in. He’s a marketing genius, he thinks to himself.

Whether or not Samantha was in on it from the start, or whether she was just too perfectly gullible a candidate not to take advantage of, only she knows (I suspect it’s the former). But it is the readership, who drives the Daily Mail’s revenue through the roof whilst simultaneously getting themselves into a fit of anger about the absurdity of what they have chosen to spend their time reading, that are the most important part of this marketing strategy.

The only mug in this story is you, Daily Mail readers. All 1.5million of you.