Reimagining the Northern Quarter - but can these new plans become a reality?

Andrea Sandor thinks they should. Here's why...

Last October I was invited to Manchester School of Architecture (MSA) to talk to MA students working on a project to reimagine the Northern Quarter. Like others invited to MSA, I spoke about the challenges the area faces, from the emergency demolitions to the impact of Airbnb to the gentrification pushing out independents and the proliferation of luxury flats.

After I spoke, a student from China approached and wanted to know who owns the land the Northern Quarter sits on. He was shocked to learn the Council doesn’t own all the land, that in fact it’s owned by a patchwork of private individuals. The student’s question pointed at a basic issue.

If there isn’t a single property owner with a mandate to create sustainable neighbourhoods for people to thrive in, then what oversight is there to ensure that will happen? This is where the state should, in theory, play a role - and the Council does have some powers to do so.

For example, according to the 1990 Town and Country Planning Act, Councils can issue Section 215 notices on owners of derelict buildings and vacant industrial sites deemed to “adversely affect the amenity of the area.” Despite these powers - and the Northern Quarter being situated within two conservation areas - a number of historic buildings were left to rot for decades, resulting in a slew of emergency demolitions last year.

While it would be wrong to say the Council is completely hands-off, it seems to prefer a laissez-faire developer-friendly approach that leaves the area to “organically” develop. Or, in other words, to develop what “the market” wants. And that currently seems to be financial products in the form of “luxury” flats and very little else.

This “state-led hyper gentrification”, as it’s called, is why the Northern Quarter is such an odd area. Yes it’s vibrant, lively, buzzing - but also falling apart, polluted, littered, and at times dangerous. This is the neighbourhood the market has made.

As I’ve written before, there’s no overall vision for the Northern Quarter. Not, that is, until now.

The MSA students have put forward concrete proposals for an integrated and cohesive Northern Quarter. And people agree it looks marvellous.

Last November the students unveiled their plans and held a public consultation at the Arts and Crafts Design Centre. Visitors to the consultation included the Northern Quarter Forum and Sir Richard Leese. Feedback was overwhelmingly positive.

Joanne Cross of the Forum told me, “I was amazed that in weeks the students grasped exactly what we’d all been thinking and talking about for years.”

So let’s take a closer look at the plans… 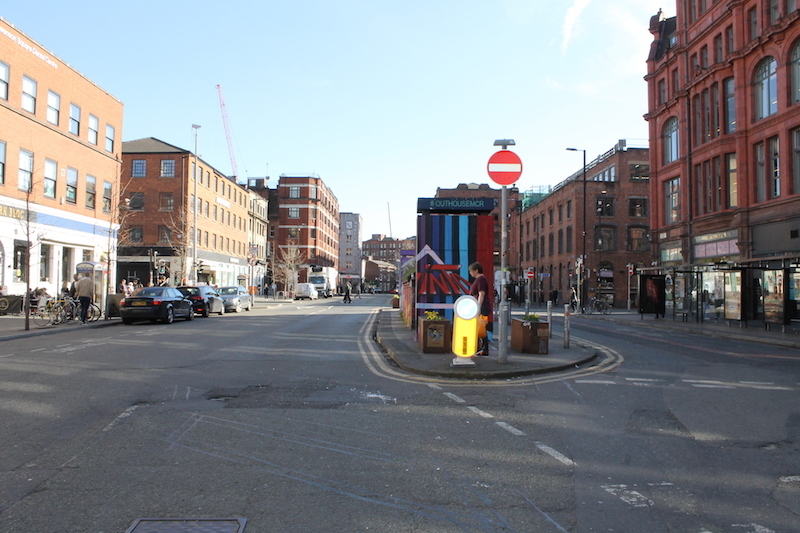 There are five other projects scoped out. They include introducing pocket parks throughout the area, roof gardens on Hilton St, pedestrianising Thomas St, transforming vacant plots on Oldham and Tib St into parks and communal spaces, and developing the Port St car park into a multipurpose space.

A fundamental principle of the plans is increasing the walkability of the area and reducing the number of cars. Thus we see streets given over to pedestrians and car parks redeveloped into parks and entertainment/exhibition spaces.

Now, you may be thinking, where am I going to park my car if all these car parks get redeveloped?

(Actually, a minority of you are thinking this because only 23% of peak-time journeys into the city centre are made by car.)

My answer: what if you didn’t need to drive your car into the city centre?

(Again, most of you already have this nailed, but a quarter of you are still driving - most likely because it’s the only or most convenient way for you to get around. But stay with me, there’s exciting stuff happening.)

The students have recognised Manchester’s urgent need to reduce its carbon footprint, not to mention its “lethal and illegal” air pollution levels. Central Manchester has the highest rate of emergency hospital admissions for asthma in England, more than double the national average.

As green goes mainstream around the world, Manchester has pledged to become “zero carbon” by 2038, and this will involve a major rethink of our congested car-dependent way of life. We’re talking infrastructure that enables safe, convenient alternative ways of getting around - clean buses, trains (that actually run), trams, bikes, e-bikes, scooters, etc.

And Manchester is on it.

£1.5bn is to be invested in 1,000 miles of safe walking and cycling routes across Greater Manchester - putting us on a par with the level of investment for pedestrians and people on bicycles in Amsterdam. The Metrolink is expanding, and re-regulation of the bus network could be on the cards.

So these Northern Quarter plans, created by the next generation, are in line with what the city is already doing and what’s needed.

It also supports the Council’s vision for Manchester becoming a world-class city that “cultivates and encourages new ideas”, “plays its full part in limiting the impacts of climate change”, and is “clean, attractive, culturally rich, outward-looking and welcoming.”

So considering these plans were made in consultation with residents, has a clear vision for a city centre cultural hub that’s green, future-facing and people-friendly, and which aligns with the Council’s own aspirations, I have only one question: when is it getting the go-ahead?

The student plans are currently on display in Fred Aldous’ shop window at Stevenson Square. Pop down for a look at the model and read more about the plans here.

Follow @undoingurbanism to keep up to date with the student project.