As the festival enters its closing straight I think I am a little boggled by the general MIFfery. I was convinced that the PQ were a string quartet who played a classical repertoire with transcriptions of pop songs… The day before I realised that they are of course the jazz quartet, five albums in, who have picked up a sack full of awards along their way. Jack Wylie (with a range of saxes), Duncan Bellamy (drums and percussion), Milo Fitzpatrick (various bass) and Keir Vine (keyboards and consoles) are not really a ‘jazz’ band, yes there are solos and complex rhythmic compositions, but this concert ranged admirably across a dozen genres – but never felt in the slightest bit gratuitous.

Helpfully introducing song titles – and they played four or five brand new tracks – the band kick off with Endless, alto sax croon and maundering electronica, stuttering rhythms, powerful string electric string bass … and maybe the ‘hang’. I couldn’t see this percussion instrument as the tent was packed, the audience was intriguingly 50:50 male/female with an age range of teenager to pensioner. Current History leapt out of the blocks with hammered keyboard chords and a monophonic bass rumble so low that your ribcage loosened. Wylie, swapping saxes, played some squally querulous (can I call them that?) breaks and then the tune shifted into a fine groove, which escalated in volume and intensity and power before halting, tripping up into beats and drones, before blasting back into action, a lurching drop of which Underworld would have been proud.

The crowd didn’t really move. They were attentive, appreciative. I guess the tunes are so complex you’d need to be pretty limber to keep up with the polyrhythmic rim-shotting, treated electric bass whangs (I can call them that) and shifts in signatures. The range of influences was impressive - Objects To Be Placed In a Tomb sounded pretty similar to Bowie’s Blackstar album, with double-tracked saxes, atmospheric builds and releases underpinned by shifting percussive patterns. A personal highlight. A Luminous Beam stepped into dubstep and triphoppery with some vast demented bluebottle static buzz, monstrously thumped drums, and some special playing from Wylie again. (The crowd started seriously moving to this, and kept it up through the riotously entertaining encores.) City of Glass started with what sounded like the four of them playing four different songs, before they filtered and merged together noisily.

There has been an interesting reaction to some of the MIF events this year – I don’t remember there being such a polarised reaction to so many of them. Maybe it is the baleful legacy of socialmeedja, whereby everything is the BEST or the ‘WORST thing ever’, but for me this was another triumph, a welcome surprise, intellectually engaging, defying categorisation . Am very much looking forward to their upcoming album. 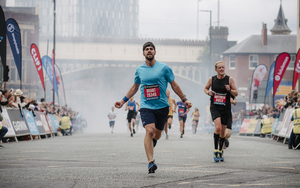 It’s Europe’s largest event of its kind - what better motivation than signing up? ...