A beautiful day, a week or so ago, I followed my nose through pastures green and lolling sun worshippers. Yes, I was dallying down the delights of Oxford Road, amidst the ivory towers of two universities. And my oh my, how these two great educational institutions have blossomed.

Knit it all together and this is perhaps the loveliest stroll in the central areas of the city region. How many non-academics would think to visit, and yet it would delight so many?

What is happening here is the University of Manchester (UoM) and Manchester Metropolitan University (MMU) are setting an example with landscaping for others in the city. There is a reason of course. Universities now live in a highly competitive world. It’s don eat don out there.

Further education has to compete globally to attract students from across the planet. To do this, you not only have to have the academic credentials, you need to look the part.

Diana Hampson, director of estates and facilities at the University of Manchester, acknowledges the point about selling across the world, but underlines gentler qualities.

“It’s about placemaking," she says. "The green areas we already had were very popular with students and staff. Now, as much recent building work comes to a conclusion, we have seized the opportunity to reinforce their appreciation of the green areas and improve and increase them. This boosts wellbeing and helps to create community."

Seeing so many people enjoying the landscaped areas on sunny days must make her feel proud, I suggest.

"It does. It’s been a real joy to see people use the spaces and also how they are using the spaces: just relaxing, studying together, playing frisbee and so on. It means we can host events too, such as a recent cycling event in Brunswick Park. We are a civic university and we have a responsibility to demonstrate that."

I started my walk in All Saints, Oxford Road, in the MMU zone; one of the more mature garden areas. Originally this was a churchyard filled with hard ledger stones commemorating the dead with the 1820 church of All Saints in the centre. The church was destroyed in WWII bombing raids and the garden created. There's a low oval wall in the centre marking the exterior walls of the church. There are still hundreds of dead under the soil here, but lots of the living on a sunny day, or indeed any day.

For more gardens, continue down Oxford Road and turn right down Booth Street West, with the Royal Northern College of Music on your right. Take the first left down Higher Chatham Street, before the Crowne Plaza Hotel and then left through the lovely new landscaped area in front of Blackwell's Bookshop and Mowgli restaurant. This area is called University Green, and is weeks old and has already been a big hit.

Walk through to Oxford Road and turn right. Opposite the main old block of UoM is a brand new park, Brunswick Park. This stands on the old Brunswick Street and the landscaping was designed by Planit IE. I suggest you walk its full length. It’s worth it.

A clever design idea was to shift the alignment of the former street so the main pedestrianised hard-surfacing now aligns with the arch of the 19th century university building by Alfred Waterhouse (the Town Hall architect).

Return towards Oxford Road and turn left. You could continue down to Whitworth Art Gallery from here and Whitworth Park. Or visit the spectacular interior of the Holy Name Church nearby, or (check times ahead) see if you could visit the Pankhurst Centre on Nelson Street where the organisation behind the ‘suffragettes’ was created in 1903.

If it's more gardens you want, cross over Oxford Street and take the street to the left of the main university block, Burlington Street. This leads into the gardens in front of Percy Scott Worthington’s Faculty of Arts from 1919. Stroll around them and then return to Burlington Street, but don’t return to Oxford Street, instead take a peek into the quadrangle surrounded by the first of the Oxford Road UoM buildings. There's little in the way of gardens but it’s impressive all the same.

If you’re walking this route during the week you could get refreshment in Christie’s Bistro and maybe sneak into the glorious Whitworth Hall, a triumph of Victorian Gothic architecture,  again from Alfred Waterhouse.

Otherwise leave through the main arched gate of the quadrangle and turn left, back down Oxford Road, passing Manchester Museum. There’s a lot of renovation and refurbishment going on in the museum but still plenty to see inside. Take the first left down Bridgeford Street and then right through the little gardens next to the Arthur Lewis Building and back to, University Green, the landscaping outside Blackwells.

Retrace your steps from earlier with the Crowne Plaza, on your left this time, and turn left on Booth Street West. Walk over Higher Cambridge Street, past the boarded-up Gamecock pub, straight over Boundary Lane to the 'Joy Division footbridge', where Kevin Cummins took his famous stills of the band in the late seventies.

The bridge crosses Princess Parkway, affording a good view of the city centre, and debouches into the splendid landscaping outside MMU’s Birley Fields Campus. Cross, right, in front of the main building and onto Stretford Road and then it's right under Hulme Arch and straight over Higher Cambridge Street returning to All Saints.

It’s a grand walk all in all, full of entertaining architectural incident and full of lovely landscaping. Keep an eye out for blue plaques.

And the key to the landscaping?

“Maintenance. It has to last,” says Anna Marohn who designed Brunswick Park for Planet IE on behalf of UoM. She's right. Too often have we had lovely schemes that bloomed, blossomed and withered within our public realm in Manchester.

“We designed the space to be beautiful, with good functionality in terms of how people might use it and with good planting," continues Marohn. "We didn’t want it to be simple and easy, but there is a maintenance contract and we believe the park will keep on working and providing beauty for years.”

Diana Hampson again: "This landscaping is a long-term project. We will treat these green areas in the same way we treat our buildings." The latter treatment hasn’t always been of the happiest, so let’s hope this time a corner has been turned.

Mike Halley, of Mackintosh Village, off Oxford Road, to the north, and a fine citizen campaigner, recently remarked to me: "The universities' area is  with its landscaping beginning to look like Harvard." I'll take his word for it, I’ve never been. But certainly, if you’ve not explored down Oxford Road and its sweet gardens, then make time. That highly competitive international battle of the universities, plus a new awareness of the value of the intermediate spaces, has won a landscaping war for the city.

Jonathan Schofield will be conducting a guided tour through and around the gardens and the buildings on Sunday 21 July at 3pm. Book here.

So how DO restaurants set themselves up as an online shop for delivery options?
What you say
Read Next
● / News & Comment 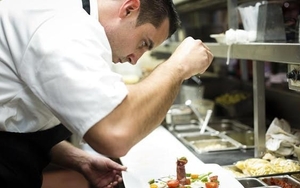 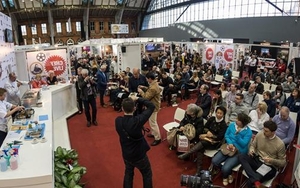 Northern Restaurant & Bar 2020 has been postponed 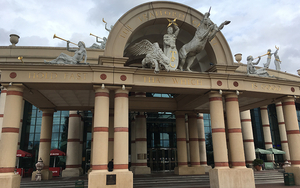 Is the Trafford Centre going bust?

Having racked up £5bn debts, owners Intu warn it may not survive a struggling high...