SO Royal Mail has honoured Manchester's Town Hall as one of the great British buildings in its new series of stamps. We agree with that decision completely.

Manchester by 1877 had become a city state. It controlled the local administration, the gas, the water, the police, the education, the parks and roads, and it was rich.

So here's Confidential's potted history and love-in with the Manchester landmark.

Manchester’s greatest monument is a candidate for the Victorian building par excellence – the whole age summed up in one: the extravagance, the energy, the self-belief and the achievement. It was designed by one of the great architects of the day, Alfred Waterhouse, who also designed the Natural History Museum in London and the main university block of the University of Manchester.

At the opening banquet in 1877, MP John Bright described the way the city felt about the new building: "With regard to this edifice, it is truly a municipal palace. Whether you look at the proportions outside or the internal decorations… there is nothing like it… in any part of Europe."

The first-time visitor coming into Albert Square from Cross Street or Lloyd Street might well agree. A cliff of ornate Gothic stonework drags the eyes upward to the giant clock tower above – the minute hand is 3m in length and spire 85m above ground level. 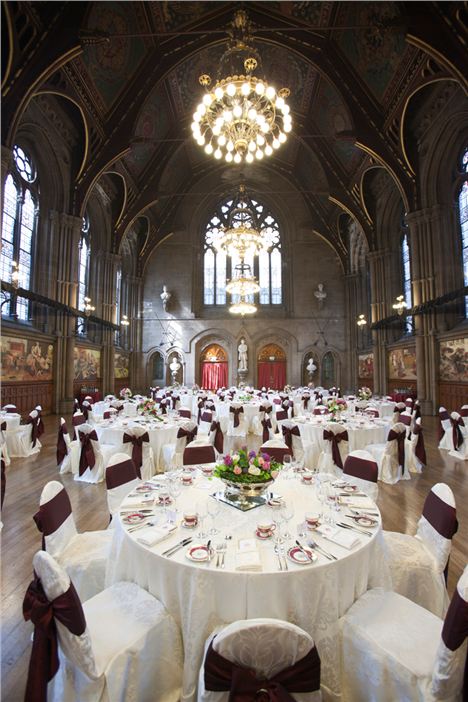 The Great Hall - Thanks To Mark Waugh a www.markwaugh.net

On the top of the spire is a golden ball with spikes symbolising a cotton bud about to burst, but also the sun, for wherever the sun shone Manchester had business and influence whether through trade itself or its Free Trade movement. The roofline is a wonderland of pinnacles, gables, chimneys and metalwork.

The city is in some ways lucky to have the building.

In the competition judged on St Valentine’s Day 1868, Alfred Waterhouse’s design ranked only fourth in terms of appearance, but was superior to the others in its practical use of the awkward triangular site and the best in its handling of light, access and ventilation.

The style chosen was Gothic from the 13th century – a style called Early English and seen as patriotic. Gothic was also intended to form a link with the medieval trader cities of the Hanseatic League and of the Low Countries, from where legend said Manchester’s textile roots had sprung.

Manchester was being fashionable too, adopting the in-vogue Gothic style in conscious contrast with the Classical style favoured by Liverpool. Town Hall in the nineteenth century

The outpouring of feeling was reinforced by the fact that the city was desperate for a new Town Hall. Manchester by 1877 had become a city state. It controlled the local administration, the gas, the water, the police, the education, the parks and roads, and it was rich. The full construction cost of over £1m was met by the rate-payers, not through Central Government or European grants.

If you feel the Town Hall looks familiar, it may be because it’s the TV and movie body double for the Palace of Westminster (Houses of Parliament).

A 2004 programme which used the building as a backdrop was the BBC drama State of Play and a 2011 film that did the same was The Iron Lady starring Meryl Streep.

The place also helped a well-known architect develop his career. During lunchtime breaks from work in the City Treasurer’s department, Norman Foster would tramp the corridors sketching the building. The Town Hall is still the focus for civic events and remains the political and administrative centre of the city.

The building is free to visit but you will have to sign in at one of the reception desks, where you will be given a security badge and told which rooms can be visited on the day. Watch out for the weddings which may impede tours of the building: the Town Hall provides a memorable setting for matrimony.

Public tours also regularly take place. Occasionally there are tours up the tower of the building via the beautifully complex clock mechanism to a perfect Gothic belvedere.

Before entering, take a walk around the building to get a full idea of its size and its ingenuity. All four sides are different, each with varied treatments of stonework and statuary.

On the corner of Princess Street and Albert Square, statues of key characters from the city’s history stare down at passers-by. Meanwhile Waterhouse cleverly placed a statue of General Agricola, the Roman who founded Manchester in 79AD, over the main doorway - the intro to the city in history over the intro to the building.

Enter here and you find yourself walking directly under the great tower and a ceiling decorated with the Royal Coat of Arms. This is a disguised trapdoor through which the bells of the Town Hall can be raised or lowered.

On each side is a statue commemorating two of the city’s most important scientists: John Dalton, atomic theory, colour blindness and meteorology, and James Prescott Joule, physics.

The main entrance chamber lies to the right and is now the Sculpture Hall hosting a cafe. There are works commemorating famous people or events. Take the staircase to the right of the reception desk. As you climb the stairs, notice the stylised constellations above.

Aside from the practical aspect of providing a focus for the city administration, the Town Hall was intended to be a unified piece of art.

Architecture, fine arts, sculpture and music were brought together amidst a mass of symbolism. Throughout, the visitor will spot cotton flowers and bees the latter a symbol of Manchester’s industrious hardworking personality.

For instance, on the landing at the top of the stairs, there is a simple pattern in mosaic of bees and cotton flowers.

Above, in the panels of the great hammerbeam roof, there are richly gilded coats of arms of the nations with which Manchester traded, including the USA, Russia, India and China. On the walls are the famous 12 murals (1879-1893) by Ford Madox Brown, the celebrated Pre-Raphaelite artist, illustrating episodes in Manchester’s history. The last to be finished was ‘Bradshaw’s Defence of Manchester AD 1642’ in the English Civil War. This was painted with the artist’s left hand after Brown had suffered a stroke.

Opposite the Great Hall are the elaborate main staterooms. These are saturated with all the decoration and detail the High Victorians adored. They are all worth visiting, but perhaps the two most impressive are at either end. The present Conference Hall was originally the Council Chamber. It contains a vast Gothic chimney piece, the Lord Mayor’s chair, an oak screen and carefully wrought-iron galleries for the press and public. The Banqueting Hall has a fine minstrels’ gallery and original curtains from the Royal School of Art Needlework, South Kensington.

If, on a visit, you pause to look into the inner courtyards, you will also gain a vision of Manchester in its industrial glory and grime. The stonework has never been cleaned and is black – coated in soot spewed from numberless chimneys. 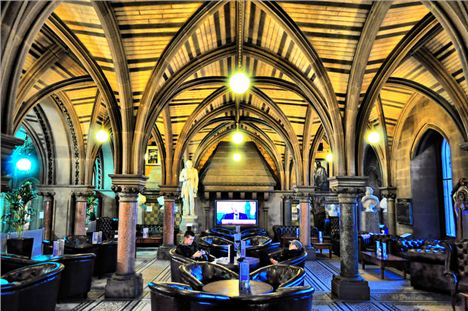 Sculpture Hall as gallery, thanks to Zill Niazi Town Hall, spire and golden spiked ball and all 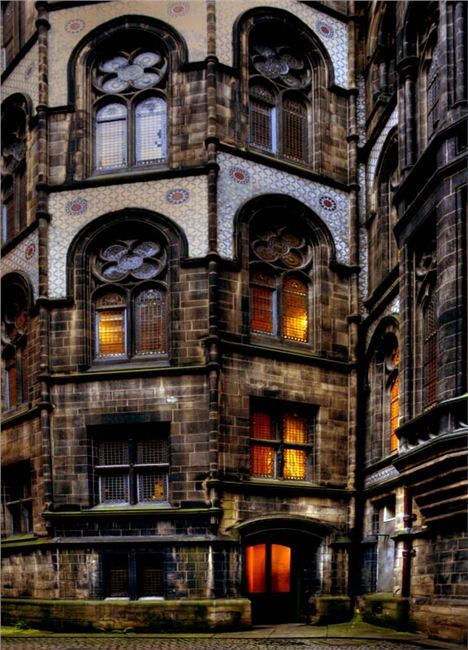 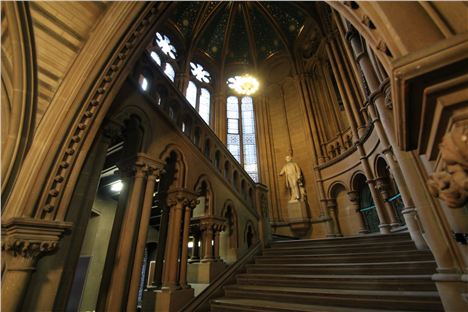 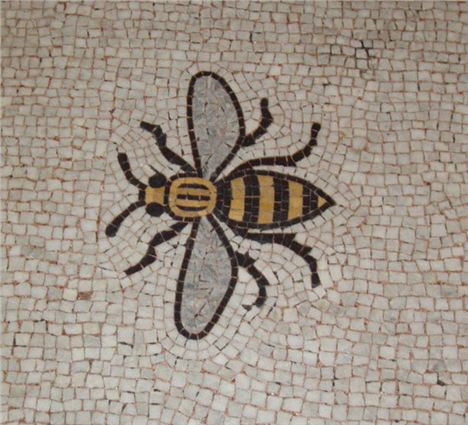 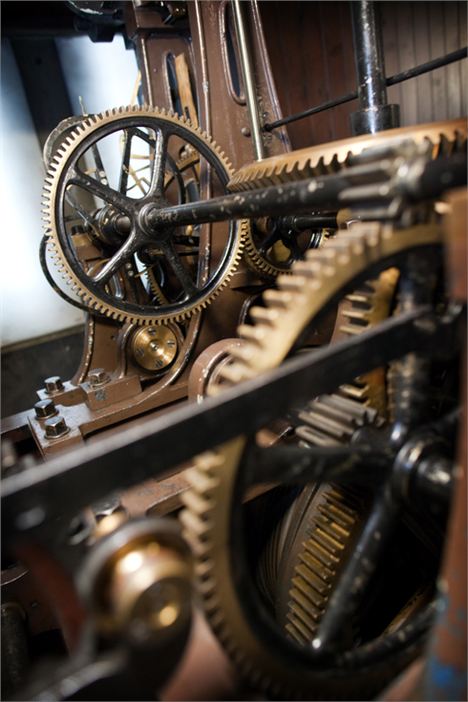 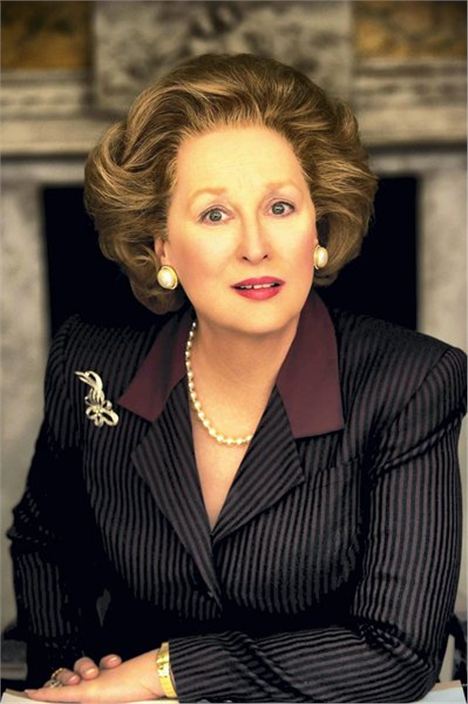 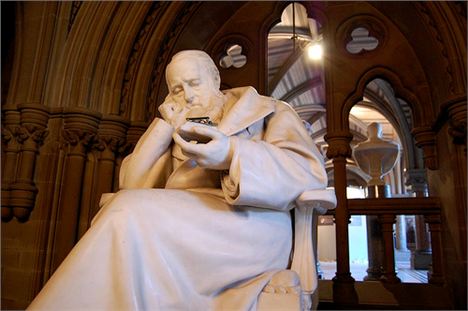 Town Hall James Prescott Joule, physics boffin. A 'joule' is equal to (according to Wikipedia) 'the energy expended (or work done) in applying a force of one newton through a distance of one metre (1 newton metre or N·m), or in passing an electric current of one ampere through a resistance of one ohm for one second.’ I honestly don’t have got that clue what  that means. (JS) 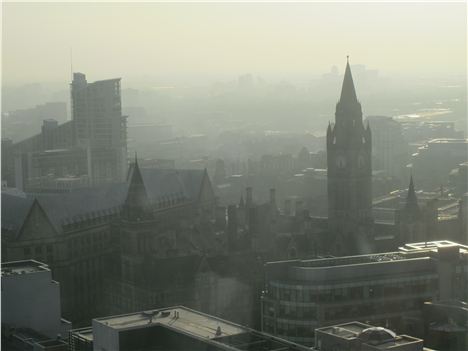 The Town Hall in the evening haze from City Tower 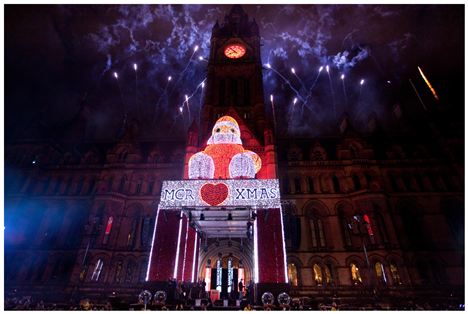 Town Hall as a backdrop for city spectacles