Holly Herndon’s music is deeply engaged with technology – how it changes our view of the world and influences the way we interact with one another – so it’s only appropriate that her performance begins with drop-down menus.

Taking to the stage with bandmates Colin Self and Mat Dryhurst a little after nine o’clock, she spends the first few minutes checking the settings on her laptop. At some point, the two big screens behind her blink to life and demand input. Cables are taken out and plugged back in. After a surprisingly intense DJ set from Dark Matter curator Mary Anne Hobbs, there is a looming sense of anti-climax. Fortunately, the digital djinns eventually relent, and the show goes on.

On record, Herndon’s music is a unique splicing of her backgrounds in academic electro-acoustic composition and Berlin techno. Poly-rhythmic and densely textured, it makes extensive use of cut-up vocals and samples from everyday life. As you can imagine, everyday life in this case means a lot of screen time, and one of the reasons Herndon feel so current and compelling is her gleeful cannibalisation of screen culture – she’s like a digital native chewing the scenery.

In concert, things are inevitably stripped back. What we get is essentially a set of shortish, techno-inflected electronica tracks with live vocals and video. It falls somewhere in the IDM no-man’s land: you could probably dance to it if you wanted to, but that’s not really the vibe. A lot of people sway.

But that doesn’t mean the performance lacks excitement. The videos, consisting of journeys around virtual 3D spaces filled with digital detritus – images of Herndon and others, giant noodle blocks, the emblem of the United Nations – are an adventure in themselves. At one point, I’m so mesmerised by revolving images of space corn that I fail to notice Colin Self vogueing his way through the audience, a flashing blue LED gripped between his teeth.

Between songs, Mat Dryhurst addresses the audience with typed messages, creating an effect that is both detached and strangely intimate, rather like the music itself. At one point, he mentions how they usually dedicate a song to Chelsea Manning – only now she’s out of prison and living in Manhattan. “It’s been a strange year,” he types. We’re only two days into MIF2017, and it’s only getting stranger.

From ‘paying it forward’ to volunteering - How you can help
● / Visit

Native and Cultureplex to remain open with no job losses
● / Entertainment 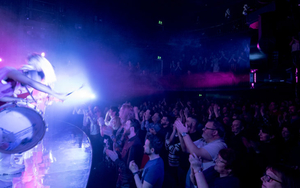 As shops, gyms and other community spaces also start to announce suspended services

Arts venues close across Manchester
● / Things To Do 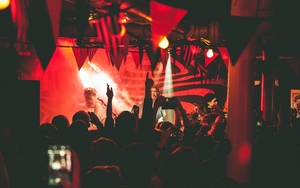 Staying in really is the new going out