Tuesday 22 May marks one year since the arena bomb, and there’ll be commemorative events across the city

This Tuesday 22 May marks one year to the day since the Manchester Arena terror attack, in which 22 people were killed and many more injured.

Manchester City Council will be hosting several commemorative events in the coming days, remembering those affected and the remarkable spirit of solidarity shown by the city and well-wishers in the aftermath of the attack.

Here’s how to take part…

The service will be attended by families who lost loved ones, people who were badly injured in the attack, first responders, civic leaders and national figures.

Space limitations mean the service is invite-only, but the event will be screened live in nearby Cathedral Gardens. At 2.30pm, there will a one-minute silence, which people are encouraged to observe.

Manchester Together - With One Voice - Albert Square, Tuesday 22 May, 7-9pm

Thousands of voices will be raised in harmony as an array of local choirs come together, culminating in a mass communal singalong from 8.30-9pm. The event starts at 7pm but people are advised to come earlier to ensure they can get in. More on the singalong here.

Can’t make it? The ceremony will broadcast on BBC Radio Manchester, Key 103 and elsewhere so you can join in at home.

Trees of Hope trail, Saturday 19 May to Sunday 27 May

A trail of 28 trees will line a route from Victoria Station to St Ann’s Square, on which people can leave messages of tribute and solidarity using specially-designed cardboard tags. At the end of the trail, the messages will be kept – alongside tributes left last year – in an archive of the city’s response to the attack. Volunteers will oversee the trees daily from 8am to 8pm, and until 11pm on 22 May itself.

Any other floral and plant tributes which are left in public places will be collected at the end of each day and taken to Wythenshawe Park, where they will remain on display until they are recycled. 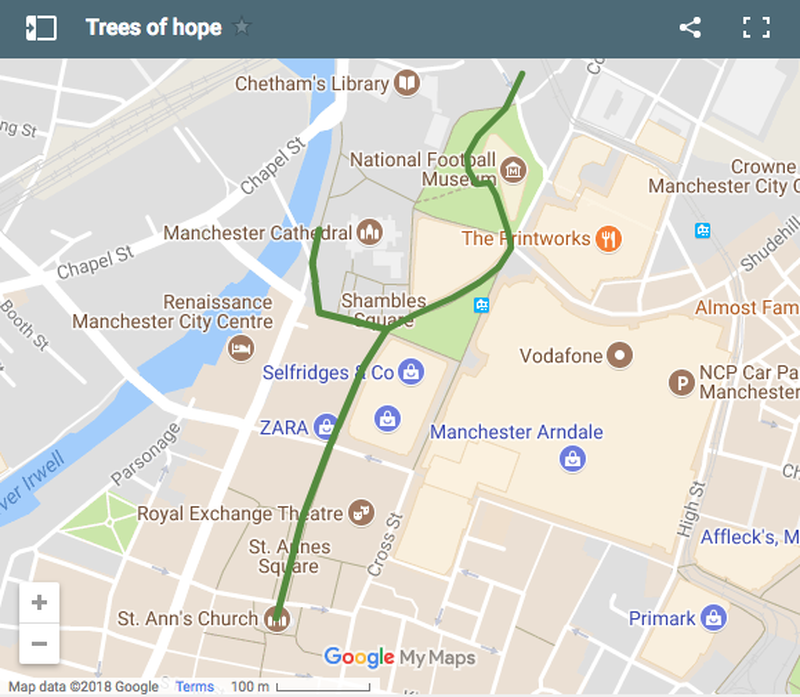 Poignant lines from songs chosen by the public will be projected onto St Ann’s Church and other parts of St Ann’s Square from dusk until daylight from Tuesday 22 to Saturday 26 May.

Bells will ring out from in the city centre at 10.31pm from the Town Hall, St Ann's Church and St Mary's RC Church (the Hidden Gem) to mark a year since the moment the attack took place.

Sir Richard Leese, Leader of Manchester City Council, said: “None of us will ever forget the shocking events of 22 May 2017. The first anniversary of the attack is bound to be an emotional time and it has a different personal meaning for everyone affected by it. That is something which is reflected in the range of commemorative events.

“We will never forget the 22 people, including children, who lost their lives and many others who were badly hurt or traumatised. They remain in the forefront of our thoughts and at the heart of the anniversary programme.

“But we also remember the way that in the aftermath of the attack Manchester, Greater Manchester and beyond came together in a spirit of solidarity and refusal to give in to hatred – a source of inspiration and comfort for many people. We invite people to once again join together in this spirit as we mark one year on.”

For more information about the Manchester Together events, including road closures and diversions, visit www.manchester.gov.uk/mcrtogether.