Living the Michelin dream in Michel Guerard’s ‘Garden of Eden’ 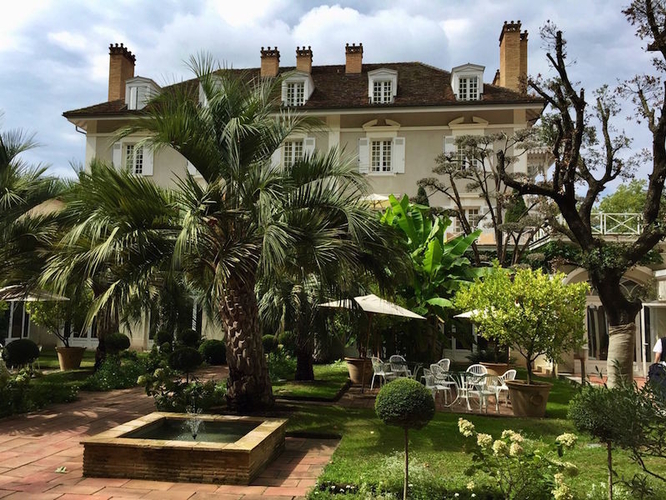 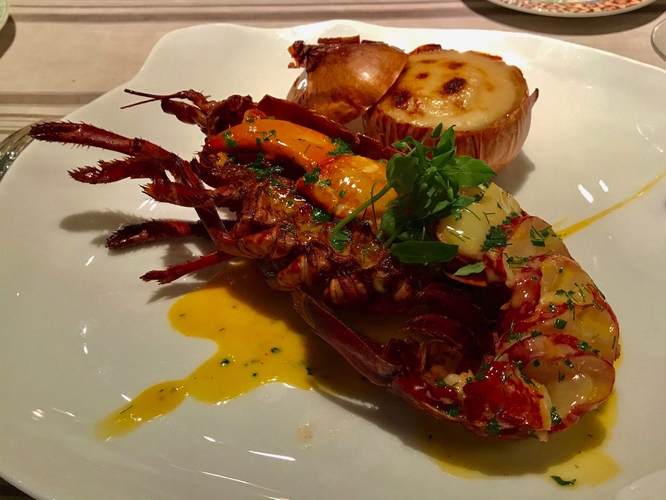 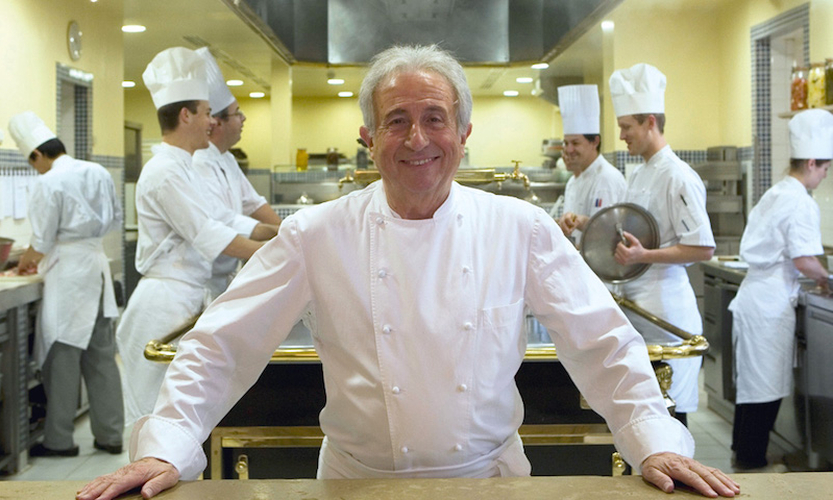 CRIKEY, where did that life go? Restaurants have changed over the past 30 years or so since Gordo walked into a three-starred Michelin restaurant for the first time, aged 27. Les Crayères, run by arguably the best looking chef in the world at the time, Boyer. The dish was a ‘canon’ of lamb, a deboned rack, cooked in a rosemary-infused salt crust served with green beans, finished with unsalted butter, dauphinois potatoes bringing the garlic along for the ride and finally, a thick, sticky jus slightly drunk on port adding a touch of sweetness to balance the dish out.

A bottle of Chateau Mouton Rothschild 1953 made it a seminal moment. It can still be brought to mind with great clarity 30-odd years on.

Rarely will you find that dish on menus today, Michelin or not. Every chef wants to be Gordon Ramsay or Simon Rogan. And the pity is, 98 per cent of them get it wrong. A truly great gastronomic hero once told Gordo that chefs do need to break the rules, but they need to understand them first. Which is where they go astray.

Later and 500 miles further on, Gordo, along with his partners in culinary crime, the Watson family, arrived in a place that has played in his head like a video ever since. Eugénie les Bains, about equidistant between Toulouse and Bordeaux. Paradise in the middle of nowhere. The Landes. D’Artagnan country.

It was a small estate that had been taken over by another fabulous couple, the Guérards; the place was called Les Prés d’Eugénie. There was a gatehouse where you were stopped; name taken and pointed the right way to the main house. Arriving there, we were welcomed by a big smile from someone front of house. Boots were opened; cases magicked away and in your room before you walked in. 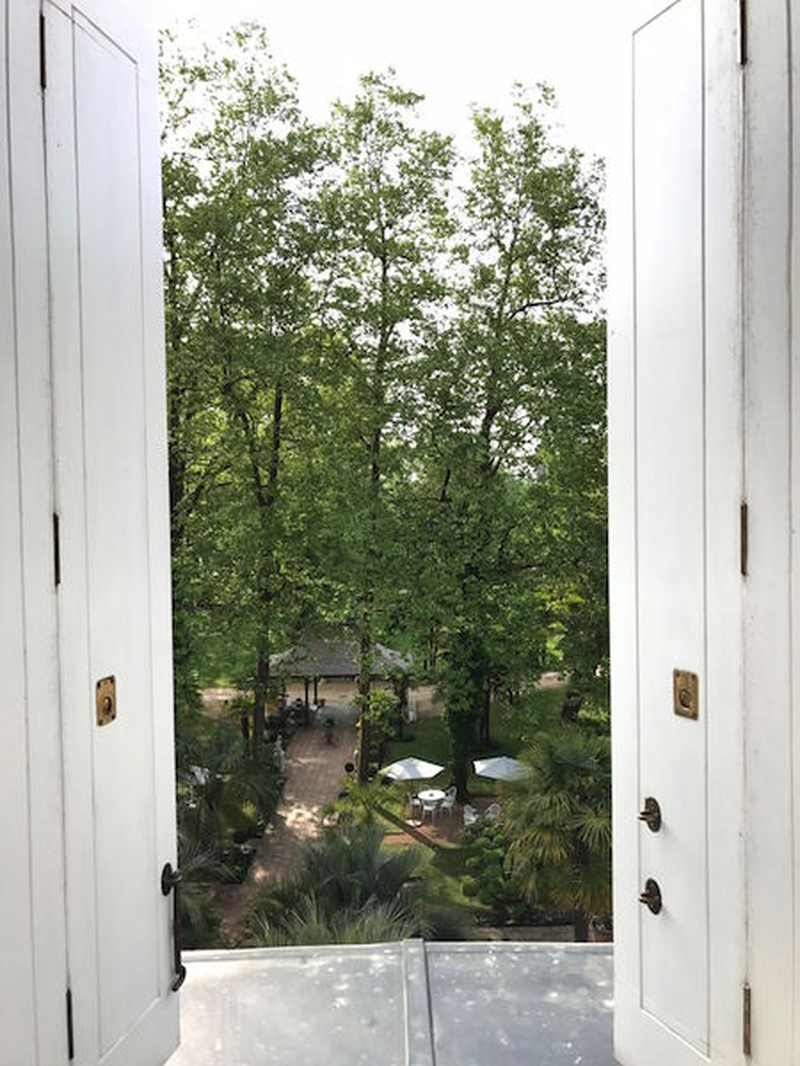 This year Gordo was invited to celebrate 40 years of Chef Guérard holding three Michelin stars. Twelve months previously, and for the first time in 20 years, Gordo had dropped in with his pal, Howard Sharrock. It was one of those times when, having sung the praises for ages, the meal missed the blinking mark.

Some trepidation on my return then. Had Chef become too old? As Oscar Wilde (nearly) said, “To deliver one bad dish may be regarded as a misfortune; to deliver two looks like carelessness.”

Would it happen again, breaking the fat one’s heart? 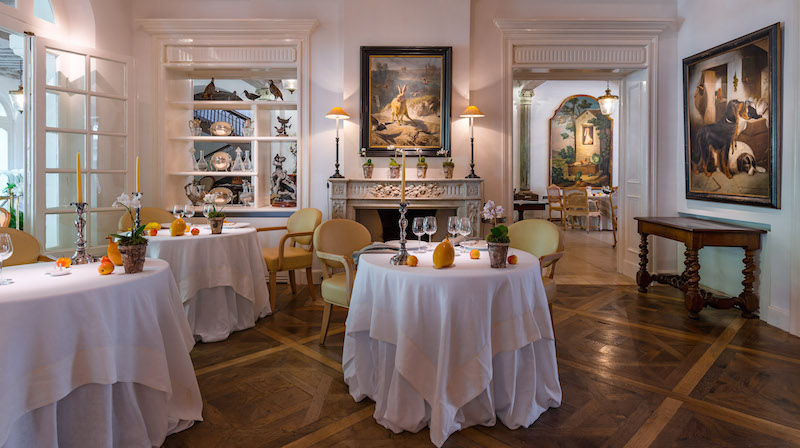 Les Prés d’Eugénie today has expanded. The house still looks the same, that being immaculately kept, wallowing in 1890. Walking through, you see Chef’s best asset everywhere. His wife, the stunning Christine Barthélémey, daughter of the founder of the world famous Biotherm range.

Mme Guérard has been in charge of all projects front of house and in the gardens; her touch is that of a woman who has become, over decades, part of the very terrain, a supremely elegant soul who has melted into nature.

There are three separate restaurants across the estate and each one has Madame’s influence. Everything is thought through quietly, with grace, feeling and warmth. There is not a bad seat in the house.

There is a swimming pool to the rear of the main building, where Gordo spent four or five days on his first visit, idling about with his seven-year old daughter, Georgina. He saw Mme Guerard on a few occasions, discussing, with the gardener, the benefits of planting certain flowers; other times in the house ordering chairs to be moved. Her attention to detail is staggering and her taste makes Anna Wintour’s at Vogue look vulgar.

To imagine what smoking an opium pipe is like without the danger take a walk around her estate early evening and you will believe that there are faeries at the bottom of gardens. You believe because here, they giggle and poke you gently on your walk.

What about the food? The latest celebratory menus have updated his original dishes subtly. One of a handful of master chefs, including Bocuse, Vergé and the Troisgros brothers, who developed the idea of Nouvelle Cuisine, Chef went on a seminal trip to Japan with his contemporaries and brought back a few ideas that can be seen in certain dishes today. 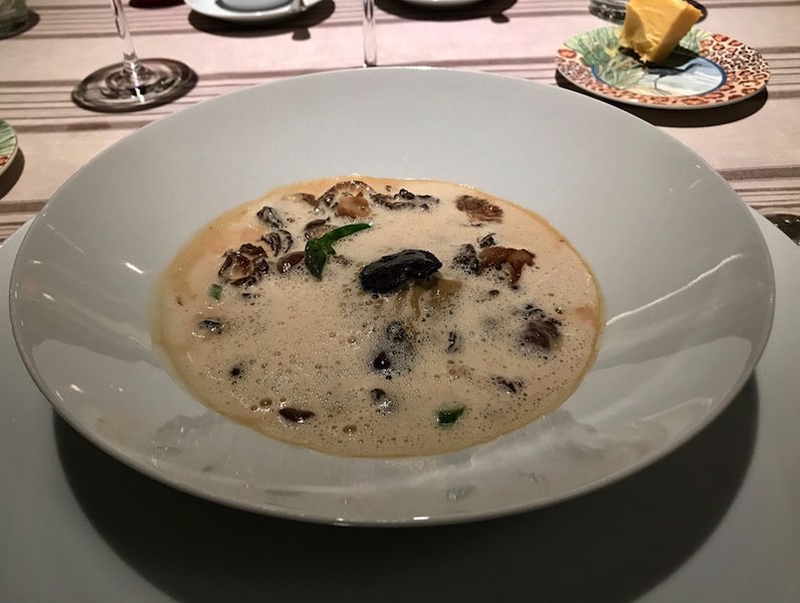 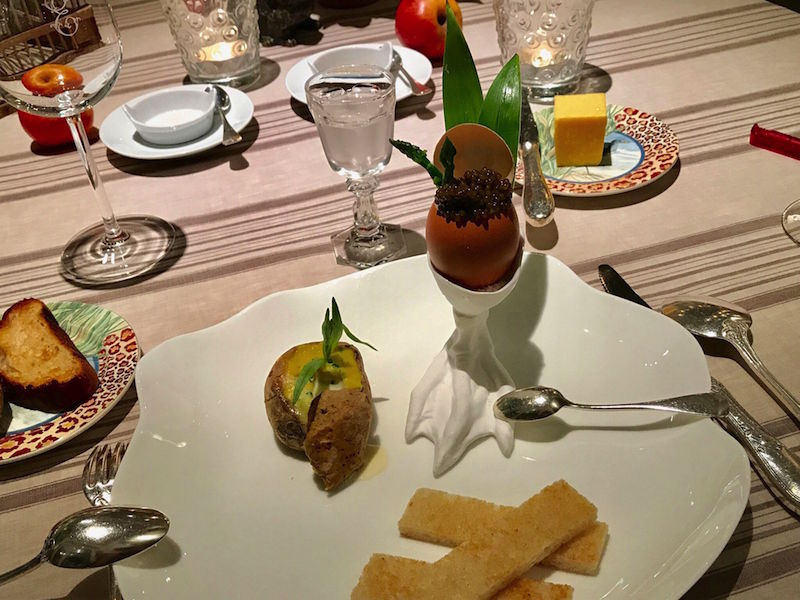 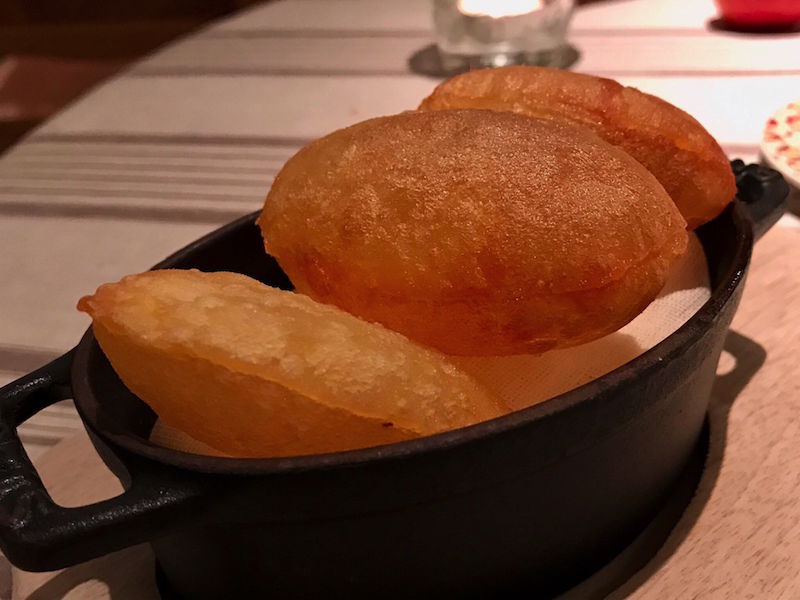 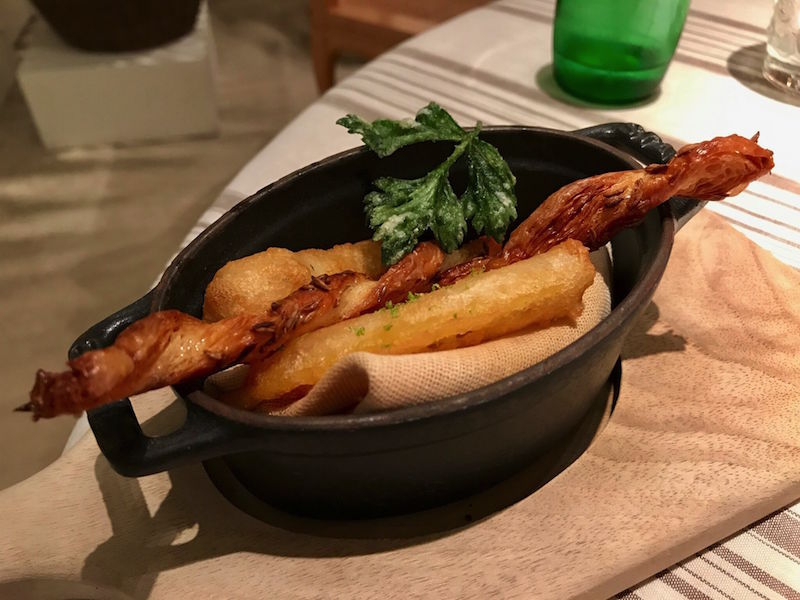 While this is not a scored review (Gordo was hosted by the Guérard family, so he is not allowed to include it in Confidentials scored review rankings) the dinner literally made the fat one cry. It was the lightly smoked lobster dish. Gordo had been shown, years previously by Chef, the technique of smoking the shell only, filling it with the delightfully cooked lobster so it wasn’t overwhelmed.

Chef prefers female lobsters (or he did when he wrote his masterpiece cookbook, Cuisine Gourmand; weight about 1lb 2oz. Gordo pities the fishmonger.) The meat is removed from the shell, the shell lightly smoked, the meat poached lightly, replaced in the shell to take on some of the smoke, then draped in a butter and herb sauce.

On the side, an onion has been short-roasted, the flesh removed, cooked further and pureed with some garlic and, well, a little cheese maybe? It’s an elevation of the different flavours, binding the whole experience into a natural high without becoming so complex it overpowers the wine.

A special mention regarding the beef fillet as a main course. Of course it was perfect, as was the dreamy potato purée. But, sat on top were three beautifully formed soufflé potatoes. These fellers are difficult to pull off and are rarely seen on menus. I’d go back for a bowl of them.

And here is another reason for Gordo’s love-in with Chef. His family home, Château de Bachen, became a vineyard some 30 years ago. During the meal, Gordo was shown three bottles, two whites, Château de Bachen, Baron de Bachen and a red, called Barocco. Some great chefs push some sickly looking children at you, blind with the unconditional love of their offspring. The Guérards haven’t, they are stand out and great in their own right. 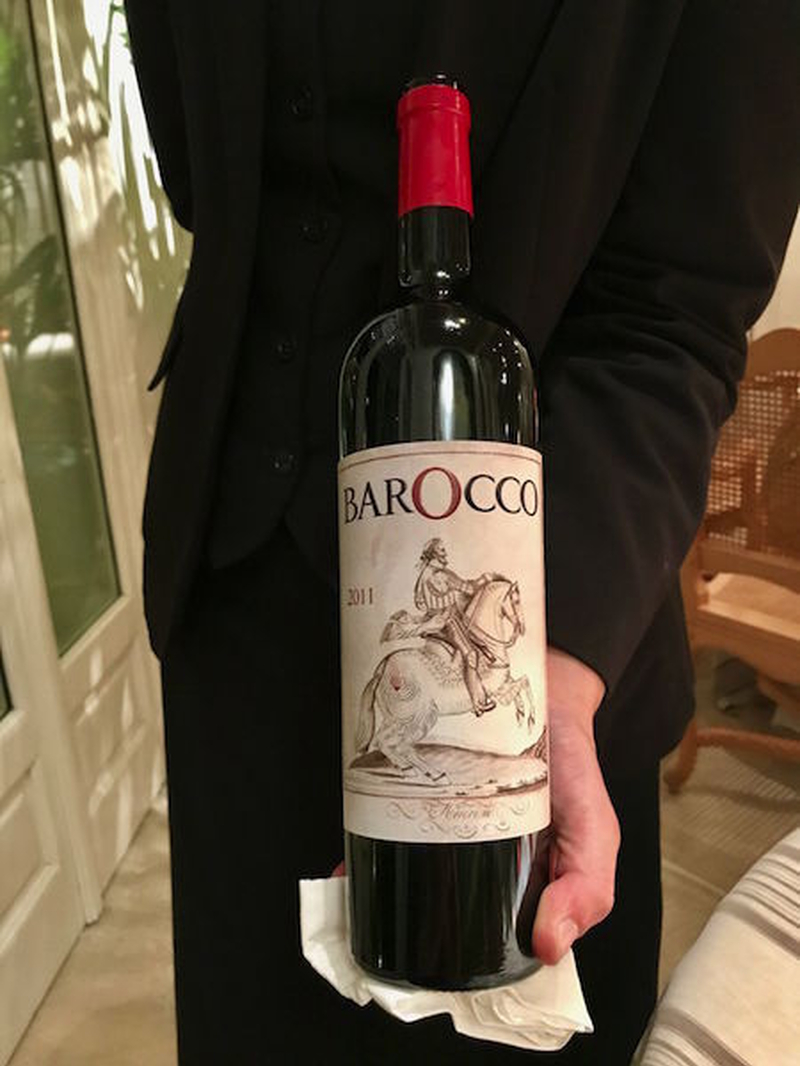 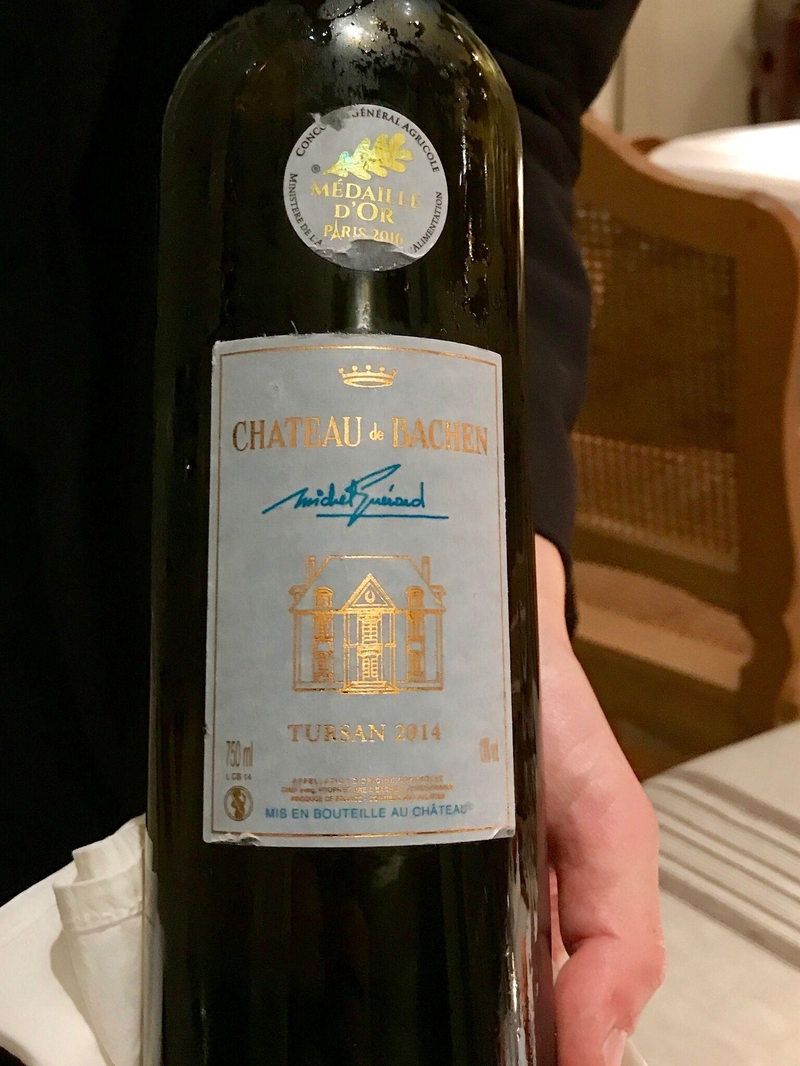 The following morning’s breakfast was quite simply the best this jaded, fat, balding mess has had. The pastry section is on fire. Plan to take it in your room and spend an hour over it, with all the windows open. The breads fruit, juices, jams… even the bloody boiled eggs are beauty queens.

There are two more restaurants on site. One, Le Ferme aux Greves, specialises in chicken and suckling pig roasted on an open fire, where you sit shoulder to shoulder with the genial locals and eat gloriously great traditional French fare. The other, Mother Poole & Cie, is on the corner of the front road. You slip in for a coffee and slip out bewildered having eaten in a café that sends you on your way with a soul cleansed.

So, have The Guerards been careless? No. The only thing that could have made Gordo happier than when he left this tranquil present day Garden of Eden is if many years ago, he had met Christine Barthélémey before Chef Guérard…

If by any chance you can tear yourself away…

Bordeaux, Biarritz and Bayonne and the many picturesque villages of the Pays Basque and the Pyrenees are all a day trip away.

Gettiing there: the nearest TGV station is one hour away. Airports: Pau 45 mins, Bordeaux and Biarritz both 1 hour 30 minutes.