THE feeling of a fresh blow dry is one of the biggest confidence boosters around.

Unfortunately, many of us are totally incapable of repiclating the same effect achieved by a professional at home and too skint to splash out at the salon every time we need a blow dry boost.

At £18 for the service it certainly isn’t dirt cheap, but undoubtedly it is far less severe on the purse than the standard £30- £40 for a ladies’s cut and blow dry.

It is into this void that Kara Britton, owner of Kara’s Blow Dry Bar, has stepped. Offering the kind of end styling service one would receive in the hairdressers without the cost of having an actual cut, Kara’s Blow Dry Bar Bar aims to enable more women to enjoy fabulous hair more often.

A first for Manchester, the John Dalton Street bar takes inspiration from  New York, where quick, easy and affordable blow dry bars for  modern women on the go have become extremely popular in recent times.

Stepping into Kara’s place, hair washing basins line one side of the wall, whilst a row of seats with vanity mirrors occupy the other. A list of blow dry options is offered from a menu, which encompasses the ‘Sleek and Chic’ (poker straight), ‘Blow on the Go- Go’ (a lunchtime revamp) and the ‘Californian Wave’ (beachy waves).

Packages are also available for hen and birthday parties, as well as ‘Petite Princess’ treatments for the under 10s. I opted for the Va- va- voom (a straight blow dry with body at the top and lift at the ends), hoping to look well groomed without verging into Cheryl Cole wannabe territory.

After a blissfully relaxing hair wash, I was directed to my seat, where my hair was painstakingly coiffed, tweaked and arranged until I was a far glossier version of my original self. Having naturally unruly and curly hair, I can’t say my locks were any more ‘va va voomed’ than normal - although if that were the case I’m not sure that the effect would be at all desirable. Rather, everything was more polished, refined and definitely more elegant than I could ever have hoped to achieve with my terminally ill hairdryer and battered round brush at home.

At £18 for the service it certainly isn’t dirt cheap, but undoubtedly it is far less severe on the purse than the standard £30- £40 for a ladies’s cut and blow dry. The whole experience is nonetheless still a luxury; perhaps permissable for a birthday or special event which justifies a little extra expenditure, but not too much. 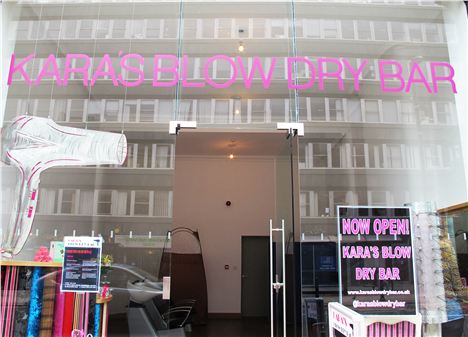