IN the hairdressing world, the L'Oréal Colour Trophy is a big deal. It's one of the industry's longest-running awards, it's judged by leading stylists, and the competition is always tough.

We believe in creating hair that a client could walk out of a salon with, not wild and wacky looks. For us, it's about creating beautiful hair

So it's good news that a Manchester salon has just won not one but two awards at this year's ceremony – putting them in the top 3 salons in the UK for colouring.

James Roberts Hair and Beauty, just off Deansgate, came away with third place in the main award, The Colour Trophy, and took first place for the Young Colourist Award.

We caught up with James, the salon's owner and creative director, to get his reaction. He said, “We were really surprised by it. There's only three awards at the ceremony so to be in the winners of two of them...it just doesn't happen.” 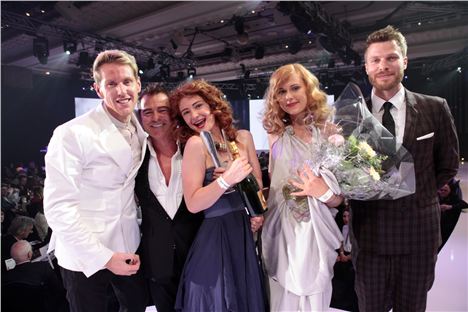 What did they do to impress the judging panel, which included big names such as Charles Worthington MBE and Trevor Sorbie MBE?

Said James, “They liked how we'd taken our inspiration from architecture and furniture rather than just from fashion. Our entry for the Colour Trophy was inspired by 1920s Art Deco. It was about symmetry and shadow and angles rather than just about contrast.”

It's a gorgeous haircut. Natural, flowing and iridescent. And, unusually for a catwalk event like this, it's the kind of style you could wear in everyday life.

James agreed. “We believe in creating hair that a client could walk out of a salon with, not wild and wacky looks. For us, it's about creating beautiful hair, even if it's for a high fashion competition.”

The Young Colourist Award was won by Natasha Calderwood. She started at James Roberts as an apprentice, and thanks to her prize win, is now a member of the L’Oréal  Professionnel Colour Academy for 2012-2013. Membership of the Academy is a 'dream year' for colourists – an opportunity to learn technical skills from the best, and pass them on to other stylists around the country.

It means you can have highlights or a full colour done by one of the UK's leading salons for colouring – with a saving of 42% on the normal price.

A colour and luxury treatment at James Roberts costs just £52.25 with the offer (normal price is £90). It's available until 31 August. Book early as they're experiencing a popularity surge since winning the awards. Find out more.