He painted Salford's smokey tops, on cardboard boxes from the shops, and now one of LS Lowry's most adored and iconic paintings is hanging permanently at The Lowry on Salford Quays.

Described at yesterday's ceremonious hanging as "a real piece of civic history", Going to the Match (1953) is now back on public display after being bought at auction for a record-breaking £7.8 million.

Salford Mayor, Paul Dennett, led a campaign to keep the piece within the region, and as he described yesterday, "Going to the Match is a quintessential and iconic LS Lowry painting, and it should rightly be here amongst many of Lowry's painting and drawings."

A bit about its new home

The Lowry is one of the leading arts venues in the UK, and its main gallery features a permanent L.S Lowry exhibition that is free to enter and contains works such as Head of a man with red eyes (1938) and Coming From The Mill (1930).

The venue itself is named after the painter, who resided in Salford for most of his life, and there are currently 400 individual works, as well as an extensive archive of photographs, press cuttings and exhibition catalogues, all on display across several curated spaces.

Today, The Lowry "provides critical and curatorial analysis of his work and seeks to raise his profile as an artist of international stature." Music duo Brian and Michael were also keen the do the same.

Back where it belongs

The majority of L.S Lowry's works are strongly associated with the North-West of England, and Going to the Match is one of a number of paintings based around the theme of sports and city life. This particular piece was inspired by Burnden Park Stadium, the old home of Bolton Wanderers.

The painting has been on public display since the opening of the gallery back in 2000, but until the recent Christie's auction, the painting was not owned by the venue. After the piece was delicately re-hung by some folks in white cotton gloves, The Lowry's Chief Executive, Julia Fawcett explained, "This is an artist who speaks to the north in a way others simply can't. He has a very special place in the hearts of, not just Salford, but right across the north."

The public can now go and see Going to the Match, as well as over 400 other pieces by L.S Lowry, at The Lowry arts centre from Tuesday - Sunday every week. A new display which details the story of this much-loved artwork is also up on the wall, alongside a cartoon by Guardian illustrator, David Squires.

The Lowry's successful bid at the Modern British & Irish Art Sale at Christie’s in London means that the painting now sits just a few miles from the site that it depicts. It's an experience for those who love art, those who love football, and those who love Salford.

The Lowry galleries are free for everyone, and it's always worth checking out the programme of special exhibitions and performances too. The galleries are open Tuesday to Friday 11am-5pm, Saturdays and Sundays 10am-5pm.

Read again: Drama of The City: Droning on about Manchester

KStars: a shop riding a choreographed wave
What you say
Previous Article Next Article
Read Next
● / News & Comment 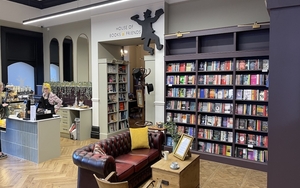