I found a website the other day that made me breathless. There were some real beauties. I just couldn’t take my eyes off them. Jeez, some of those curves.

Yes, I'd found the website www.bridgesforsale.co.uk. You can buy whole bridges. Who’d have thought it? There is nothing more eloquent in construction than a bridge, they are metaphor for humanity and the need to create connections and bring disparate elements together. If you see me on a bridge then I’ll probably have a slightly demented grin on my face.

Erecting a Bailey Bridge takes no time at all. Or rather 24 hours

The one that’s floating my boat on Bridges For Sale is the 30 metre Bailey bridge in Kent. I was cycling down the Mersey valley the other day and found a handsome Bailey bridge spanning the river at Chorlton water park (main picture). This got me thinking about the missing bridge in central Manchester and Salford.

People tend to moan in clichés, and just about the biggest clichéd moan around here concerns the lack of significant green space in the city centre. If it’s a quiet day just stand still (perhaps on a bridge) and that almost inaudible buzz you can hear is people moaning about green space.

Yet 15 minutes walk from Bridge Street and Spinningfields there is a lovely pair of green lungs, The Meadows and Peel Park. These are big enough to easily satisfy a yearning for grass, flowers and trees. There’s even the bonus of the River Irwell winding through the scene.

The big problem is that the route along Chapel Street and the Crescent from central Manchester isn’t the most obvious. This seemed to have been solved when Salford Council had a competition and in 2014 announced that a beautifully elegant structure from Tonkin Liu had won. The cost was £2m and it would leap the river where the disgracefully tatty disabled access to Pint Pot pub presently squats (who the hell looks after that?)

Sadly the funding wasn't there and the project was shelved. This was a shame, silly in the scheme of things. (Tonkin Liu, by the way, are the designers of the superb 40m (135ft) Tower of Light rising next to Manchester Central as we wrote here).

Some people in Salford were happy about the death of the idea, complaining £2m was too much. This was ridiculous given the benefit to the regional centre it would have delivered. £2m for a bridge is a snip in any case, well it was until I cycled past that Bailey bridge in Chorlton and found www.bridgesforsale.co.uk. Forget £2m, you can buy a Bailey bridge for £25,000 or the nearest offer. 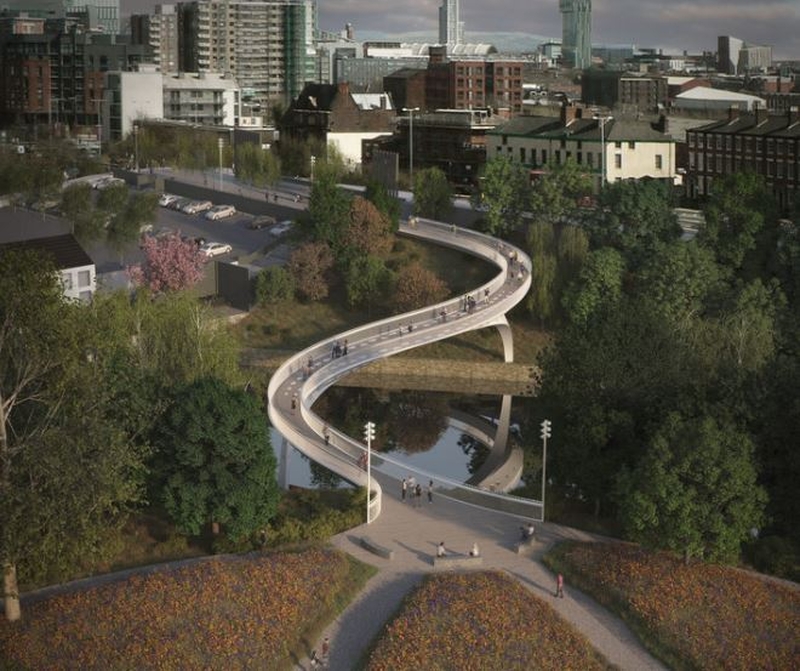 Bailey bridges have a big connection with the region, in the form of Tommy Storey. I asked a contact about Storey, Andrew Rosthorn, and he gave me a very comprehensive answer.

He told me Tommy was born in 1912, apprenticed as a plumber and taught himself welding in the 1930s to start up as an engineer in Stockport in 1936. In 1940, Tommy was refurbishing lorries for the war effort in Stockport when the war office civil servant Donald Bailey sketched on the back of an envelope a pre-fabricated truss bridge that could be assembled at night by six men working without a crane and using simple tools under enemy fire.

By 1942 Storeys were the lead firm in the team of 650 British engineering firms working on the project and on the night of November 26th, 1942, men from 237 Field Company Royal Engineers laid the first front line operational Bailey bridge over the Medjerda River near Medjez el Bab in Tunisia. A 1945 Bailey over the Rhine in Germany at Rees and dubbed 'Blackfriars Bridge' was a record-breaking 548 metres long, supported on pontoons.

Field Marshal Montgomery wrote: "I could never have maintained the speed and tempo of forward movement without large supplies of Bailey Bridging. It was the best thing in that line that we ever had."

According to a Graces Guide entry, Tommy Storey was a well known figure in Stockport and happy to offer his employees a lift in his Rolls Royce. He lived on Broadway in Bramhall and bought his Rolls in 1957 as a personal tribute to British engineering. If he recognised anyone in the morning queue at the Bramhall Lane bus stop, he would pull up and offer them lift in the front seat, "with the next five in line going in the back of the Rolls."

Back to Salford. This is my idea (or really Andrew Rosthorn’s idea).

Put a Bailey bridge across the Irwell from the Crescent to the Meadows.

There’s still time in 2020 because the whole point of erecting a Bailey bridge is it takes no time at all. Or rather 24 hours for a good military team. This is the 75th anniversary of the end of WW2. How apt. Given the emphasis on sustainability and new ways of doing things as we come out from the COVID-19 crisis the use of a second-hand bridge, or rather a pre-loved bridge, would tick another box.

Come on Salford, I reckon you can manage £25k or at least the Greater Manchester authorities could. You might be able to knock down the price as well. What about crowd funding? I reckon 30 metres of bridge would do the job. And think of the benefits, suddenly the city centre and the rapidly improving Chapel Street would be linked to proper green areas by a totally appropriate structure that cost very little.

'Imagining the city' is an occasional series looking at schemes we think might improve Greater Manchester.

Jonathan Schofield offers regular tours of the city. During these difficult times he is offering exciting tours that are perking up Zoom covering a huge range of Manchester themes and topics. You can sign up to be part of these virtual tours here. People are loving them.