These five Greater Manchester theatres are at risk of being lost

Most are derelict and in disrepair, despite all five being Grade II listed

Not only do some have great architectural merit, theatres are one of the cultural strongholds of society - and often valued community venues to boot.

But while Greater Manchester has many thriving theatre venues, offering everything from West End hits to offbeat rep, some inevitably fall by the wayside.

That’s why five local theatre venues - Victoria Theatre in Salford, Theatre Royal Manchester, Hulme Hippodrome, Theatre Royal Hyde and Tameside Hippodrome in Ashton-under-Lyne - have found themselves on this year’s Theatres at Risk register: an initiative, revised annually by Theatres Trust (the national advisory body for theatres) that highlights and supports theatres under threat of closure, redevelopment or demolition across the UK. Crucially, every venue could potentially be returned to its original performance use.

So why protect them? As performer and Theatres Trust Ambassador Jack Dee says: “Nothing comes close to the thrill of live performance…and the unique buildings where this magic happens should be treasured. Restoring and maintaining theatres is not cheap, but it is worth the investment. Each and every building on the Theatres at Risk register could have a bright future as a performance space with the right support from funders, local authorities and communities working in partnership. Each will recoup that investment many times over, attracting visitors to an area, kickstarting regeneration - and contributing to the sense of wellbeing of the local community."

Most of Greater Manchester’s at-risk theatres are now derelict and in disrepair - despite all five being Grade-II listed (making us wonder why they’ve not been better protected) and boasting everything from complete grave traps to rare Art Deco features and exuberant Rococo plasterwork.

While their future remains uncertain, the recent removal of Hulme Playhouse from the register shows that - with support from bodies like the Theatres Trust - there can be a happy ending.

Here are the Greater Manchester venues currently deemed at risk…

Built in 1899 and designed by eminent theatre architect Bertie Crewe, the Victoria Theatre’s features include fine stained glass, an intimate auditorium and remains of wooden sub-stage machinery (including a complete grave trap; a concealed opening named for its famous use of an open grave in Hamlet). A bingo until 2007, it has remained unoccupied and in disrepair since. It is hoped planned redevelopment opposite will pre-empt the theatre’s own regeneration; meantime, a local trust have opened discussions with the local council and the building’s new owner. 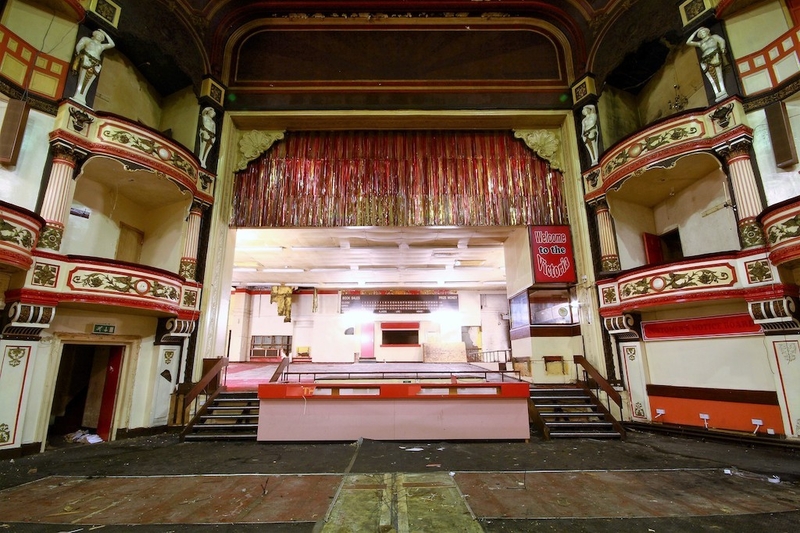 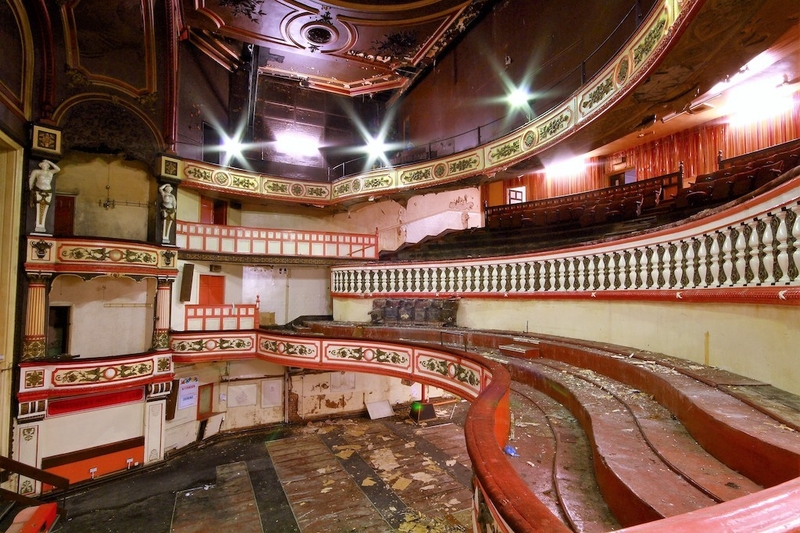 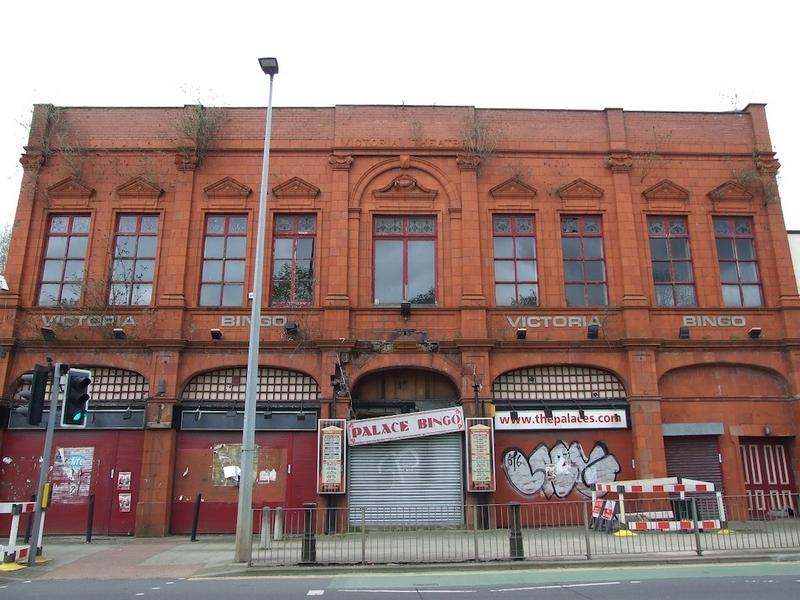 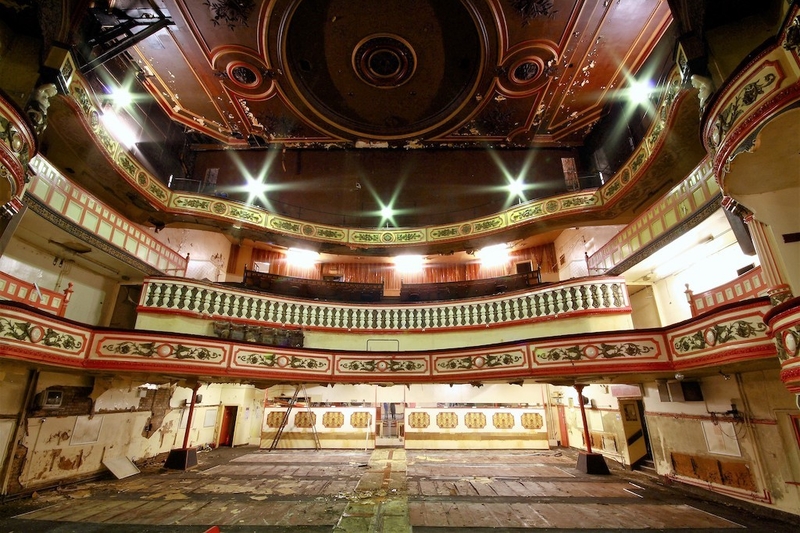 Built in 1845, Theatre Royal is Manchester's oldest surviving theatre building and, according to the Theatres Trust, one of the finest examples of theatre architecture to have survived in Britain from the first half of the nineteenth century. Built in the classical style, it was a source of inspiration for the London Opera House. Its use as a nightclub until 2009 ‘obscured rather than destroyed the theatre interior’ but the building - bought by Edwardian Hotels London in 2012 - is yet to be restored and remains vacant.

Last used for theatre in the 1960s, Hulme Hippodrome boasts ‘a splendid music hall with a spectacular auditorium featuring a riot of gilded Rococo plasterwork.’ It has since hosted snooker players, bingo players and evangelist group Gilbert Deya Ministries but the latter - who bought the building in 2013 - were forced to leave when the council served a Dangerous Buildings Notice in 2017. Subsequently vacated by squatters, it is now empty. A lack of communication between its owners and the council cast the building’s future in uncertainty.

Described by the Theatre Trust as ‘a beautiful and atmospheric Edwardian theatre, which could be restored as a large community venue,’ Hyde’s Theatre Royal was threatened with demolition for a housing development but saved by spot-listing in 2000. It was purchased by Hyde Islamic Resource Centre in 2016, and a change of use application was approved by the local council, despite Trust objections. Repair works have been approved to some parts of the building but unoccupied areas remain a concern.

‘A rare theatre survival, illustrating the inter-war fashion of adaption to cinema, and retaining a wealth of Art Deco features from the 1930s re-fit’. Tameside Hippodrome was closed in 2008 and a threat of demolition was halted a year later when the building was listed. A community interest company set up to restore the theatre has received support from the local council and general public, and negotiations are looking positive.

Interview: Melanie Horrocks - 'It’s finding what works for everyone and hugging bunnies'
What you say
Read Next
● / News & Comment 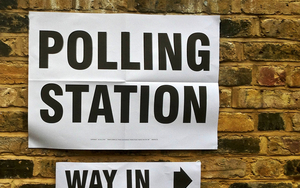 Danny Moran gives the insider scoop on which seats might change hands tomorrow, and who... 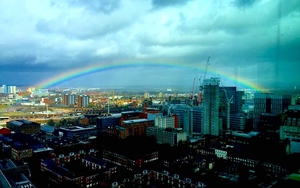 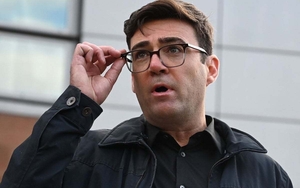 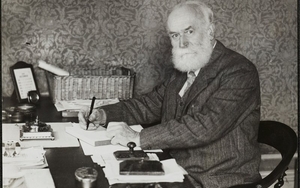