‘Passport: Back to Our Roots’ will see big bands play small venues in Manchester and beyond

Elbow, Everything Everything, Public Service Broadcasting and The Slow Readers Club are the first artists to announce gigs for Passport: Back to Our Roots - a new nationwide campaign to raise money for grassroots music venues at risk of closure. More gigs will be announced soon.

The artists will be playing one-off, intimate shows at grassroots music venues on dates to be confirmed, when it is safe to perform with no social distancing.

Entry to these shows will be via a prize draw, which will run for two weeks from Monday August 17th. For a £5 minimum donation to the campaign, music fans will be entered into the draw to win entry to the show of their choice for themselves and a guest.

Bury band Elbow will be returning to Manchester’s Night & Day Café, three decades after they first performed at the iconic venue. Frontman Guy Garvey said: “This is a simple way of looking after the very roots of British music, and will result in some powerful, joyous shows when we can at last see each other again. I’m very proud to be involved.”

Night & Day’s Jennifer Smithson added: “We are thrilled and honoured to have Elbow returning. (They) have been friends of the venue for many years. We'd also like to thank Passport: Back to Our Roots and the other partner companies for pulling this together and helping grassroots venues like ours at this difficult and challenging time. This should be a very special show and has the potential to be something quite amazing!”

Fellow Manchester rockers confirmed for Passport: Back to Our Roots include Everything Everything (performing at Esquires in Bedford) and The Slow Readers Club (performing at Hebden Bridge Trades Club). London’s Public Service Broadcasting, meanwhile, will be playing in their home city’s Amersham Arms.

Jez of Everything Everything said: “Like all artists worth their salt, we came up through smaller rooms and tiny stages, learning our craft as we went. So often these vital venues are run on a shoestring, but what they provide to their community socially and artistically is invaluable.

“The Back to Our Roots project is helping grassroots music venues back on their feet after these testing times. We wanted to come to Esquires as it’s exactly the sort of gig we’d have done ten years ago, but actually never had the opportunity to. It’s our pleasure to be involved.”

Passport: Back to Our Roots is the brainchild of Sally Cook, director of operations at Manchester music icon Band on the Wall, and music executive Stephen Budd - who founded a similar campaign in 2004, which raised money for two UK charities via a series of internationally renowned musicians performing intimate shows in small venues.

Campaign partner Music Venue Trust will receive 80% of money raised: they will distribute half of the amount to the host venue and the remainder will go into their crisis fund, which is designed to safeguard the futures of grassroots music venues struggling to survive the COVID-19 crisis.

The other 20% will go to Inner City Music, the charitable organisation that operates Band on the Wall, which is responsible for the administration of the project and will cover its overheads.

Band on the Wall is one of several Manchester institutions to be struggling for survival due to the coronavirus pandemic, which has seen many live entertainment venues closed since March and still unable to host indoor performances. Socially distanced shows (the next stage of the industry’s ‘reopening roadmap’) are likely to be economically unfeasible for the majority of venues; heralding an even longer period of uncertainty before they can open fully once again.

On 18th July, Band on the Wall revealed it would be making 26 staff redundant and closing for its planned renovation earlier than originally intended, reopening in September 2021; the venue had partially reopened in a food and drink capacity but found that trading without live music was unsustainable. The same week, operator Mission Mars revealed it would be closing two beloved Manchester music institutions, Deaf Institute and Gorilla, due to the crippling effects of coronavirus: fortunately both have since been purchased by Tokyo Industries, owner of venues including Impossible and Factory, but such incidents reflect what a tenuous situation the industry is in (more on that below).

Seeing established artists live in an intimate setting that holds real significance for them is at the heart of the Passport: Back to Our Roots campaign, which aims to capture the true essence of the live music experience and the unique bond between artist and audience.

Sally Cook, co-founder of the project and director of operations at Band on the Wall, said: “It’s incredibly exciting to see artists supporting the grassroots venues that form the foundation of the UK’s live music industry, acknowledging their importance and celebrating the unrivalled experience of watching your favourite bands up close and personal, surrounded by friends and united in appreciation for live music in all its loud and sweaty glory.”

Mark Dayvd, founder and CEO of Music Venue Trust said: “Our #saveourvenues campaign has been very successful so far in raising funds and awareness to support grassroots music venues who have been hit very hard in recent months, but we are not complacent and are under no illusions that there still many challenges to overcome . There remains lots of work to do to safeguard the future of our venues and Passport: Back to Our Roots is an excellent and timely initiative that will help keep a spotlight on what still needs to be done while raising desperately needed revenue. Live music will be back and when it is we are going to make sure it comes back with experiences people will never forget.” 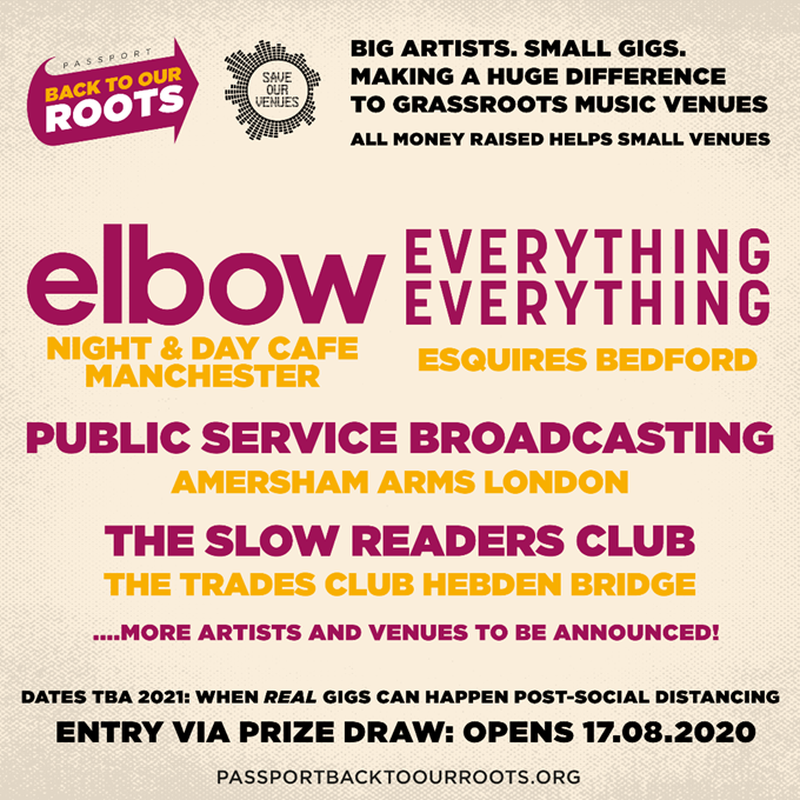 The Passport: Back to Our Roots prize draw is open from Monday 17th August - entry costs £5 minimum donation, with winners receiving tickets for themselves and a guest to the gig of their choice. Dates will be confirmed once indoor performances can again take place without social distancing measures.

Light it in Red

On Tuesday 11th August, the live events industry across the UK will come together in solidarity to help save the live events and entertainment sector, which is on the verge of collapsing without financial support from the government. This follows growing calls across the sector, as well as local parliamentary groups such as GMAPPG.

Despite some recent positive milestones for live music and nightlife, including £2.25m emergency funding for music venues and parity for the clubbing sector in accessing the government's £1.57 billion performing arts recovery fund, it remains a tenuous time for all the industry - from music to comedy and theatre, festivals and other events.

Hundreds of venues are expected to turn their lights red, along with other creative activities being staged in over 20 cities across the UK to symbolise the industry going into red alert, while a final call to action titled ‘Throw us a line’ will be taking centre stage on London’s South Bank.

Events, festivals and performance venues have been unable to safely reopen due to social distancing guidance. They may not reopen until early 2021 - and opening times keep being pushed back. While the government’s £1.57 billion rescue fund will provide a lifetime to some, it does not currently acknowledge the wider events supply chain; around 70% of which is freelance. With the self-employed income support scheme set to end this month, over a million professionals are at risk of losing their jobs and redundancies have already begun: research indicates that 25% of companies will have served notices by the end of August, rising to 70% cent by the end of December.

The Professional Lighting and Sound Association (PLASA) launched its #WeMakeEvents campaign to address the imminent danger the industry is in. As part of the campaign, its first Light it in Red night saw hundreds of UK cultural venues - including The Lowry, below - turn ‘emergency red’ last month. This Tuesday is set to see even more buildings on ‘red alert,’ including Manchester icons such as Band on the Wall and The Dancehouse.

The socially distanced call to action will shine a light on the collaborative nature of the industry, showcasing a creative experience and live displays containing messages from established figures. Platinum-selling artists Peter Gabriel, The Cure, and Imogen Heap are a few of the many voices giving their support to this cause, with others expected to join.

Gabriel said: “The live events sector employs over 600,000 highly skilled people in the UK - event production, audio, lighting, video, logistics, planning, transportation and technology - over 70% of which are freelancers. All of whom have had no work for the past four months, with little likelihood of restarting until spring 2021 at the earliest.

“A lot of high arts have now been given some support, but people working on the festival side of things and in live events have been forgotten about, and I hope they are not forgotten about any longer. Around the UK they’ve created something which I think is the best in the world.

“Many of these people are freelancers, so don’t fall under furlough schemes. So right now, they are feeling the pinch very badly and if we want live events and festivals to stay an important British business then it needs to be supported.”

Award-winning rock band The Cure added: “The aim is to have financial support extended for the people and companies in this sector, until they can return to work.”

Find out more about the Light it in Red event on the website. 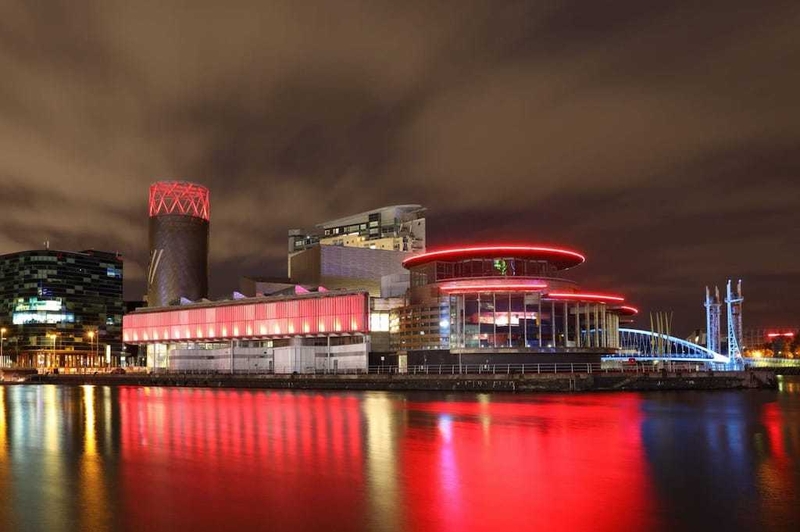