Confidence is essential in designing public realm, boldness helps, simplicity is a massive virtue but delivery is proof of the pudding. These qualities are all evident at the new public space under the mighty towers of Deansgate Square. It immediately grows the city centre south and enhances the general amenity of central Manchester.

"It’s always interesting to see how people use the space because that is one factor with public areas you can’t dictate."

You won’t have missed the Deansgate Square towers. They are the defining landmark of Manchester from every angle. At Beeston Castle a couple of weekends ago, the towers were clear; 31 miles away, as the crow flies.

The cluster has a deceptively simple design, four towers of differing heights but the same design, the tallest at 201m (659ft). The cleverness lies in the way they sit in relation to each other, all at different angles, with that cut back on each side of each building. This ensures the towers catch the light at different times with an effect that can be enchanting, uplifting and artful.

Deansgate Square is some of the best work of Manchester's Simpson Haugh Architects and arguably the best recent cluster of tall buildings in the UK. More than anything else these buildings are pin sharp. The same goes for the public realm designed by Manchester-based TPM Landscape and titled, somewhat inelegantly, The Square at Deansgate Square.

“So how did you go about getting the square to where it is now?” I ask James Sidlow, Senior Development Manager of Renaker. Renaker are the prolific northern English company behind many of the tall buildings in Manchester and Salford.

"We always start the same way. We give a very clear client brief with room for creativity,” says Sidlow. “For instance this space was always going to be a hardstanding square with high-quality materials and careful planting. We wanted a space where people could sit and enjoy a coffee but equally have an evening meal outside or even just relax and take break. We think that has all been achieved and we’re very happy with the results TPM delivered.” 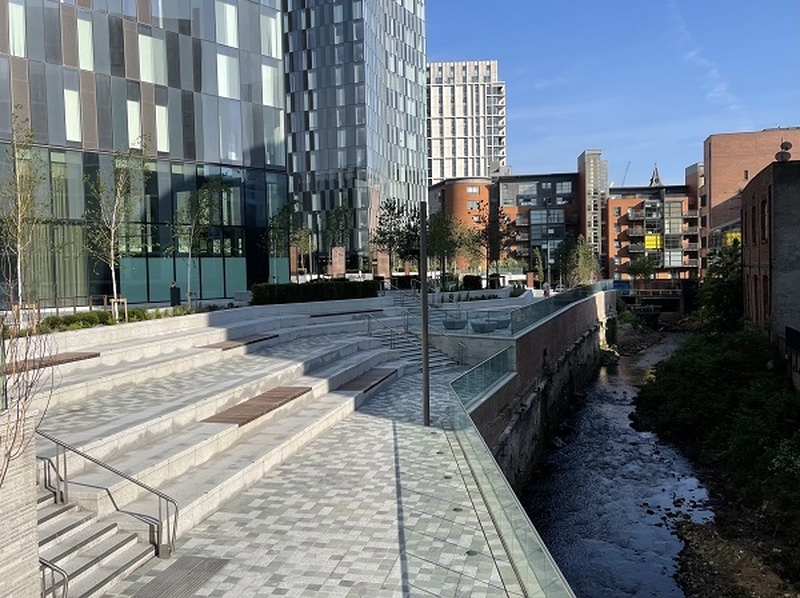 I ask if there has to be a compromise between residents and the public.

“We wanted something different for Manchester that is very much open to the public but we have to be equally mindful of the fact this is a residency too,” says Sidlow. “There are 1700 people here right now and when the remaining two towers are occupied that will rise to 3000 people and jump again to 6000 over the longer term within the masterplan bordering the Mancunian way and Chester Road. This will be their home so while the square is going to be an extension to the city and a new public space we have to achieve some sort of balance.”

Plenty of food and drink and more will be arriving by September. Popular Italian restaurant Salvi’s, Northern Quarter newcomer Mule, florist Flourish and General Store from Great Ancoats Street are all joining the party. That will liven things. Cocktail bar Atomeca is already in place. Licences will be to 10pm outside and midnight inside. The range of Manchester and region businesses should please residents and public alike.

TPM has had to grapple with a difficult sloping site. The company solved this with terraces from the higher ground to the south down to a glass wall over the River Medlock. The site curves from west to east and probably covers a distance, say, from St Ann’s Church through to Marks & Spencer. The central and widest part in the centre will provide the main event and dining space.

This area includes a scattering of upended double bed-sized panels in Cor-ten steel with a pattern reminiscent of a mashrabiya you might find in Islamic design. In other words light, elegant latticework but here with a particular function although an apt one, given mashrabiyas were all about controlling the wind. In the Levant that was to cool the hot wind, in Manchester these are fancy baffles to help limit the draughts inevitably produced by tall buildings in such proximity.

A feature not often seen in developments such as this is a large timeline etched onto a presentation wall at the entrance to the square on the Deansgate side. This includes illustrations along with text and tells the story of the site from Roman times to the present. The context of the place can also be gauged through the former industrial buildings on the other side of the river which include the HQ of Simpson Haugh Architects.

The timeline is an example of the sort of attention to detail which makes the square a success. Other nuances include the use of a consistent typeface for all the fascias of the operators.

The stone of the paving and the terraces is granite in different shades and the planting of conifers and deciduous trees is well thought through. The only caveat here is the pale granite surface stains easily when assaulted by an upturned mug of coffee or worse. That’s going to be a headache for staff working at Deansgate Square. Incidentally the management of the public space will be more that of a hotel concierge than of a security guard.

The fact you can access the new space from three points is important.

“This might be a privately managed area but it is definitely public realm,” says James Sidlow. “The city wanted us to embrace the riverside which was always the logical choice. It was also important to open up a pedestrian route from HOME and First Street to old Deansgate. That didn’t exist before and ties in with the larger masterplan’s aim to provide key linkages with Hulme and Castlefield.”

(Old Deansgate is that part of Deansgate which continues under the pedestrianised area to the east of Atlas bar.)

As the whole site develops, bounded by the Mancunian Way and Chester Road, two more 52-storey towers will rise to add to the four of Deansgate Square plus Victoria and Elizabeth towers. At the same time a new primary school will appear alongside a large green space to complement the Square at Deansgate Square.

What’s interesting is if you take a seat above the river you realise how quiet in terms of urban din the new square is. You can hear the Medlock burbling away below and the Mancunian Way hum is subdued by the towers. It's all very pleasant.

By the way some cleaning of the river bed adjacent to the square is due to take place.

There’s an ongoing national debate about privately owned public spaces which we explored back in 2018. The main point in that article is that over the last two decades in central Manchester we’ve gained a large number of public spaces both publicly and privately owned. It’s been, in the most part, a win-win situation.

The Square at Deansgate Square has reinforced that position.

James Sidlow again: “Of course, it all needs time to mature and for the operators to open to bring that extra buzz. It’s always interesting to see how people use the space because that is one factor with public areas you can’t dictate, you have to let it develop.”

That’s a good point. Either way it’s easy to predict that when those operators arrive this place will thrive. It's a very welcome addition to the city.

Read next: Mayfield city centre park: So much talk, now it's happening

MIF21: Festival Square back with a locally sourced bang
What you say
Previous Article Next Article
Read Next
● / Festivals 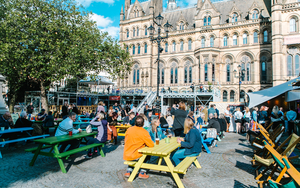 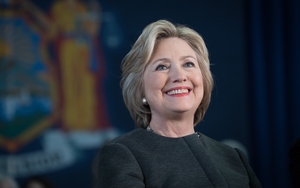 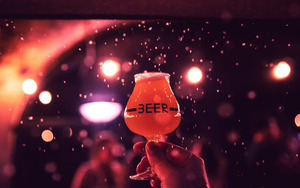