Deansgate Debacle: Why Block The Road?

THE new pavement extension on Deansgate at the junction with Quay Street is causing concern among Confidential readers.

This seems another needless hindrance to enjoyment of the city that responds to an old strategy out  of sync with 2012. That little lump out from the pavement on Deansgate shows we need a re-think.

It narrows the street pushing traffic into one carriageway on the north side of the junction for people coming into the city from Chester Road.

At the same time people driving in from the south now have only one lane option remaining when either going straight down Deansgate or turning right into Peter Street. The other lane is now for those turning left down Quay Street and thus joining the inner ring road at Trinity Way. 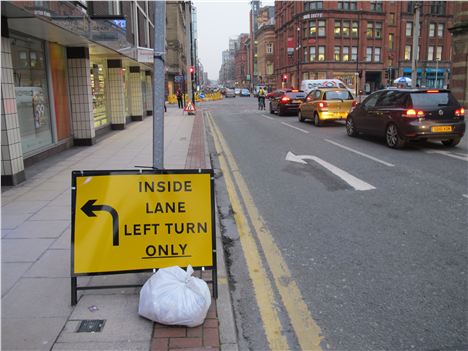 Cars queuing up one one carriageway

Confidential took the pictures below, just after 11am, of a lorry turning right into Peter Street, blocking all the vehicles behind it that wanted to go straight down Deansgate.

This meant one car nipped to the left and swerved round the lorry before chicaning on to Deansgate. Not good.

Only three vehicles managed to get through the junction, including the lorry before the lights changed. And this was at the quietest time of the day. It's going to be a problem hotspot this junction breeding short tempers. 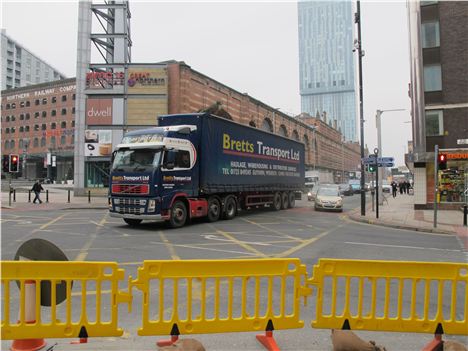 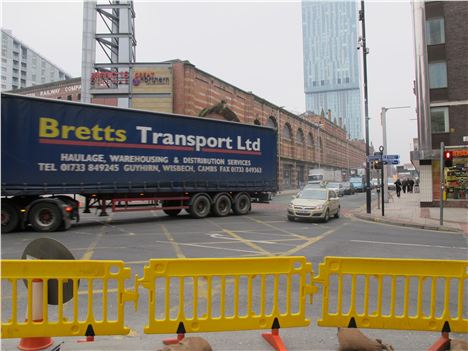 So what does the council say about this situation they've created.?

A spokesperson said, "The works at the junction of Deansgate and Quay Street are intended to encourage motorists to use the inner ring road, instead of driving through the city centre when this is unnecessary. This is part of the council's overall transport strategy of improving traffic flow and making it easier for people to access the city centre."

We think this won't affect through drivers very much at all because most of them who are savvy about Manchester will be going down the ring road already.

No, who this affects are the people it's supposed to help.

Narrowing roads - look at the nightmare on Chapel Street over the river in Salford - hits those who are actively using the city centre. It hits people who work here, the residents, the shoppers, those who want to go out at night.

This is a picture of Deansgate at just after 11am on a Tuesday morning when residents, city centre workers, and shoppers are least likely to be present on city centre streets. So by the council's logic Deansgate should be carrying people using the street to get from one side of the city to the other - through drivers. But look there are hardly any cars at all. 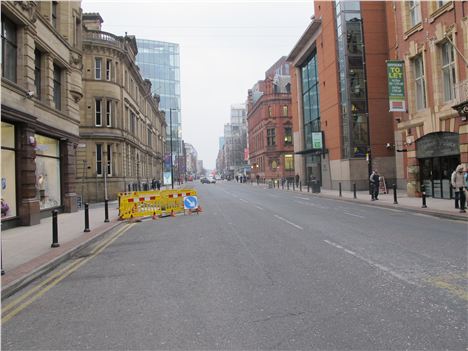 Empty Deansgate - where are the through drivers?

The times are changing, central urban areas are being affected by changes in the retailing culture, the digital age is thowing up new challenges all the time.

The council clearly think the expense of narrowing the pavement here is a good idea. They are doing it with the best intentions but we think the results will be the opposite to what they want to achieve.

At House of Fraser, where Deansgate has been narrowed for a decade it's a running nightmare for traffic with delays and problems - so taxis and those in the know use Parsonage Gardens as a rat run.

The work on Deansgate may seem trivial. But it is another needless hindrance to enjoyment of the city - we need as many people as we can getting into the centre in as comfortable a manner as possible. This little lump out from the pavement responds to an old strategy out of sync with 2012, it demonstrates how we need a transport re-think in the city centre.

MORE INFORMATION - added after the story above was posted.

In the first or second week of March the Victoria Street end of Deansgate, in front of the Cathedral, will close (the bit that leads to Bury New Road) and traffic will be diverted over Victoria Bridge onto Chapel Street in Salford and then back over another bridge to turn left under the rail lines to the old Boddington's site and Trinity Way. 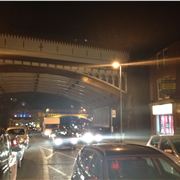 Traffic chaos on match nightThe idea is to turn the whole area around the Cathedral into a pedestrianised area - so the whole 'medieval' centre can better be enjoyed on foot. A good idea perhaps but maybe not when considering the difficulties for cars and buses to access the west side of the city centre this will cause.

At the same time another hindrance to movement on Deansgate has been placed at the Liverpool Road junction. On Tuesday 31 January this magnified the difficulties with congestion usually encountered during an evening game with United.

If there should be works or an incident on any of the surrounding streets during match night or before a big Arena date then this will be repeated but with even more pronounced effects.