WARNING: NOT FOR THE SQUEMISH

EVERY now and then we stumble across something so curious, so intriguing and just so batty that we can’t resist popping along with a camera, sticking our nose in and getting our hands dirty. This time around it was skinning and stuffing mice– little white ones. N’aww.

But before you start (and you were going to) all the mice are sourced from reptile feed stockists, so they’re dead anyway and have been bred in order to feed the likes of snakes, lizards, birds called Kes and John Prescott. 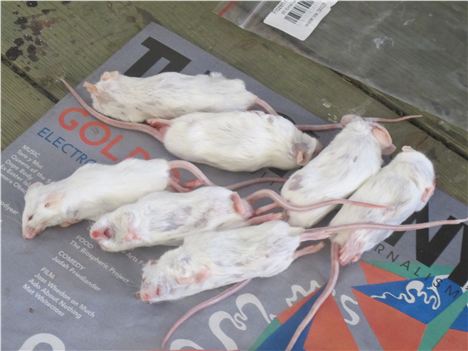 Stuart Little's birthday night out had got out of hand

This is about preservation (funny cutesy preservation but preservation nonetheless), and let’s be honest, if it’s the choice between being fed to a 7ft diamondback rattlesnake or preservation of a humorous manner, dead or not, I’d still take the teeny tiny top hat and miniature pipe thank you very much. Then again I’m not a mouse… at least I don’t think I am.

So off we trotted down to MadLab on NQ’s Edge Street (across the road from Common bar), a 1000 sq. ft. nerd-haven nestled between the hipster bars of the city's beatnik district. “We're here for the geeks, the artists, the hackers, the innovators and idle dreamers,” explains Director of MadLab, Rachael Turner. “It's a really unique space. Where else could you find mouse taxidermy, projection mapping, North Korean dissidents and 72 community groups, from technology to jewellery-making, all under one roof?" 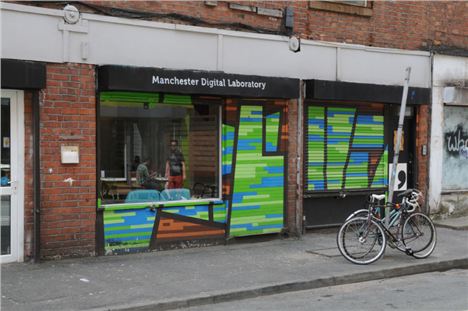 Open only for events, although there's events nearly every day, this remarkably ramshackle self-funded work-space of innovation and self-improvement hosts workshops and meet-ups ranging from CoderDojo (computer programming) to knitting circles (knitting), a talk on North Korea’s marketization (held by a North Korean defector no less) to Girl Geek Gamers (geeky girls playing games I imagine). 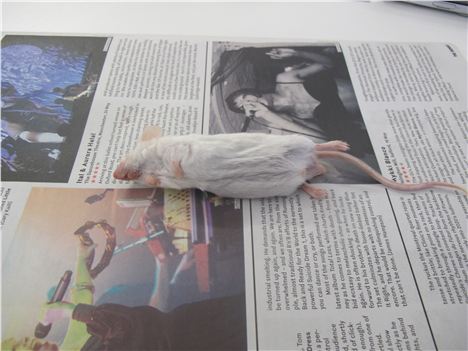 However, to my slight disappointment I’ll admit, they were a perfectly normal lot. There was a Brum neurological scientist who wasn’t adverse to a spot of dissection, a costume designer that was particularly nifty with a needle, and a solar panel engineer, who like myself, was basically another perplexed bloke. 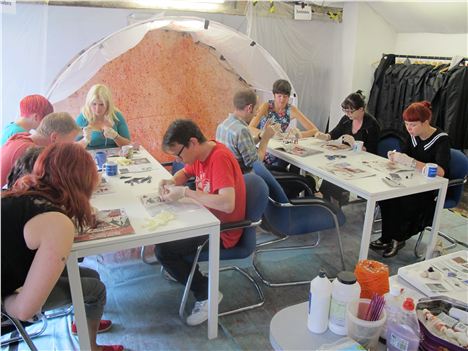 Even Shannon, the class-leader and frequent animal disembowler wasn’t that strange. Which in turn I thought to be strange – I was half-expecting a Helena Bonham Carter lookalike with a mass of tousled hair wrapped around a stuffed sea bass. A woman with around 900 cats, 23 alive. But Shannon only has the one, “My house is full of dead animals though, but I prefer to call it ‘inanimate menagerie’. I think my cat finds it all a bit confusing.”

So how does one get into this lark? “When I was a kid I used to go to the Field Museum in Chicago (Shannon is American but lives in London) and visit the halls of taxidermy animals, but particularly the sabre toothed tigers – I thought it was great that someone took the time and effort to morph a large cat.” 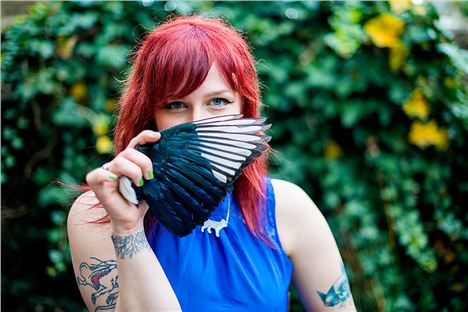 “I started about 2 years ago at the London Taxidermy Academy, where I now teach, doing a squirrel course. Having been a veterinary nurse in the states for several years and possessing an interest in medicine, anatomy and nature, I think it came quite naturally. Except instead of saving animals lives, I’m bringing them back from the dead and preserving their forms.”

So what the bloody hell is ‘anthropomorphic’? “It’s the attribution of human form. Firstly it’s just really cute, but I think it also makes the whole process of gutting and stuffing a bit less scary. I think a lot of people have a wonderfully morbid fascination and the idea of anthropomorphising an animal makes it easier to deal with the fact that it's dead. Although it’s creating something artful, pretty and funny, it also helps one face the idea of death.” 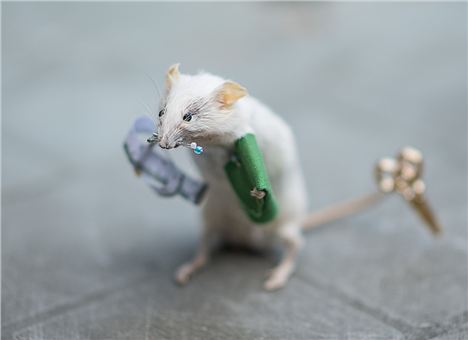 And death was certainly prevalent on the second floor of MadLab this day. Ascending the stairs a waft of beef mince creeps into the nostrils, the entire back wall of the classroom had been covered in 6ft x 8ft blood splattered white sheets. First thoughts: These must be big mice. Second thoughts: Maybe the class preceding had been anthropomorphic horse taxidermy.

As it turned out they perfectly normal sized mice and the sheets were left over from some apocalyptic zombie game of tag – still, blood splattered walls are a slightly disconcerting sight when entering a taxidermy class – it’s all a bit Human Centipede. 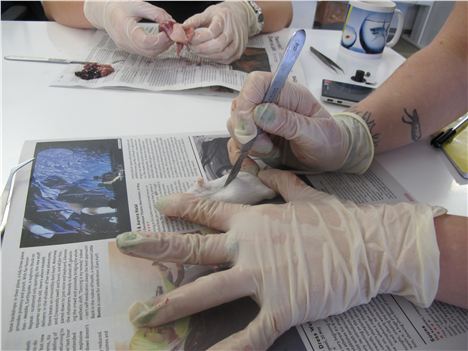 The first cut is the deepest

The first cut is the hardest, and the first cut is the deepest (baby I know – thanks Cat Stevens). It’s like standing above a plunge pool perched on a 12ft high diving board, you’ve got your speedos on, your toes are over the end, everyone’s watching, there’s no going back. You’ve just got to dive in and hope for the best – So in the scalpel goes.

The first half an hour or so are pretty gruesome. Slicing, skinning, pulling out entrails. “Ok so you’re about to cut through the small intestine”, Shannon explains, “This can get a bit wiffy.” Great. Luckily I’d brought a full pack of nuclear-fused black Airwaves to mask the smell – savvy. 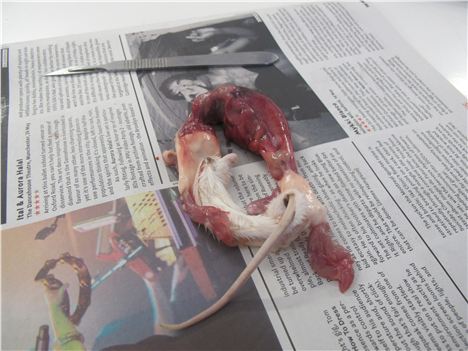 “We need to separate the skin, so you’ll need to slice through the middle of the skull – it’ll make quite a satisfying cracking noise.” Shannon continues, “Oh and we need to remove the balls, tongue and the eyeballs. Some of these little guys have quite big ball sacks.” I’d say my mouse, who I’d lovingly named One-eyed Willy (because he only had one-eye, funnily enough) had considerably bigger balls than me at this point. I was struggling.

There’s just something so very wrong about one male removing the bollocks of another male, regardless of species. It’s not on. It’s just not cricket. So attached Willy’s balls stayed. 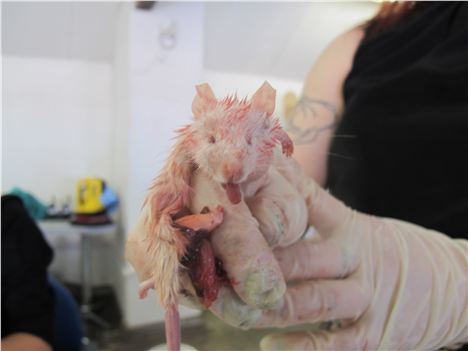 As time goes by you do become desensitised to it though, like hoodlums going out happy-slapping after playing Grand Theft Auto, you become detached from the gore. It becomes a creative and ever-so fiddly process. I found this out to my horror as I clumsily pulled little Willy’s right arm right off – He was now One-armed One-eyed Willy (I super glued it back on later). So does the initial gory element put people off? Has there been a surge in taxidermy popularity? “All the classes sell out well in advance.” Shannon tells me, “I’m booked all over the country to teach and give demos. Everyone usually gets well into it. You hear a lot of ‘ewwwwws’ in passing, but mostly when describing things like cracking through the skull or removing the tongue.”

Anyone ran off screaming into the night? “I’ve only ever had one person leave the course, and that was before she’d even started. She saw the others making their first incision and she couldn’t bring herself to do it. No one has been sick or passed out yet.”

Post skinning comes the most comedic element of the workshop. After a good sprucing with washing-up liquid, the mice skins are pinned to a block of polystyrene and given the salon treatment:

Whilst the mice are getting a blow-dry we get to making the stuffing, cotton wool wrapped around a wire, which Shannon delightfully describes as “Looking a bit like a tampon”. The wire acts as a backbone, making the mouse manoeuvrable, as do the wires fed along the limbs. One girl squeals as the palms of her mouse stretch out and spring into action, “Yeah the wire acts a bit like a tendon”, Shannon explains.

Once tanned, treated and wired up we glue-up some small black beads and ever so gently ram them into the eye sockets. Then we bung the little blighters with more wool, depending on how corpulent we wish our mouse to be. Most want a chunky mouse and beef the cheeks out by bunging wool through the mouth. I’ve never been much of a feeder, so opt for a long, skinny, borderline scrawny mouse – My lack of fiddly dexterity dictates that I shouldn’t make the final sew up the middle any harder than it needs to be. 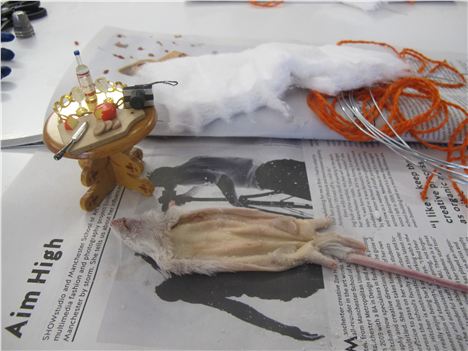 I found skinning and stuffing a mouse hard enough, but has Shannon taxidermied anything particularly weird or wonderful? “I recently made a rat for the new Science Museum London display case on brain mapping. I also helped taxidermy crows as props for Lana Del Rey's recent tour.”

“I get the question 'What's the biggest thing you've taxidermied?' more than any other question. I usually say an elephant. Which is a lie – It’s a male fox. After I’d washed him he was bigger than me.” 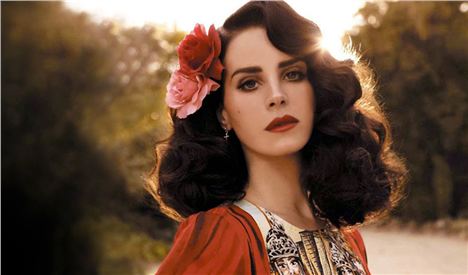 So is it a profitable past-time? “It helps pay the bills, but I am in no way getting rich from it, my day job is in digital content for a science charity. I do this mostly for fun but I do sell taxidermy mice, rats and hamsters. I also make taxidermy fascinators with magpie and crow wings which is handy around Ascot time. The strangest request was for some mice to be keeping a mini human captive in a hamster cage. A funny concept but a nightmare to find props for.” 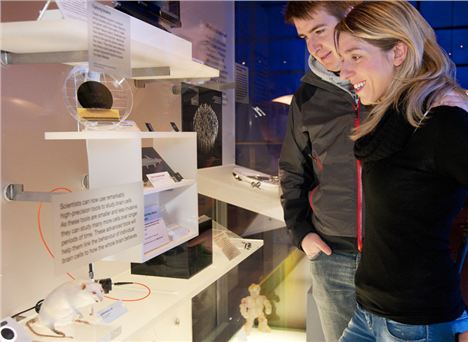 Speaking of props, Shannon had brought along two trays of them. One full of dollhouse furniture and the other an array of miniscule items, ranging from vacuum cleaners to shoes to smoking pipes. As we reached our time limit the class scurried to attach all manner of accessories to their mouse – Apparently the zombies were coming up after us, and the last place you want to be is in a room full of entrails when the zombies descend – they get a little het up.

Here’s some of the best little fellas: 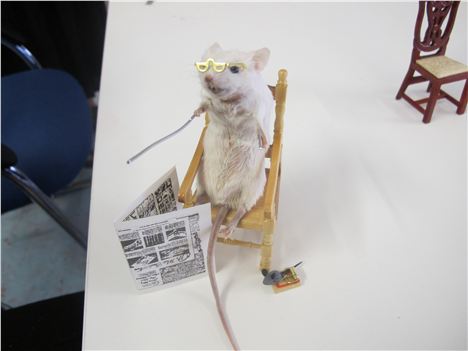 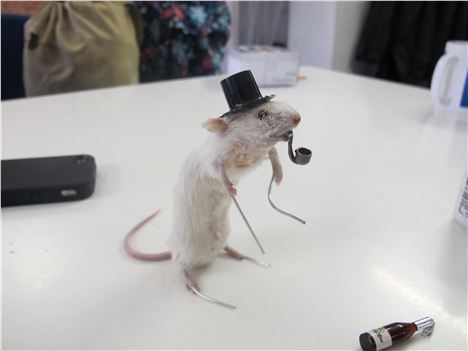 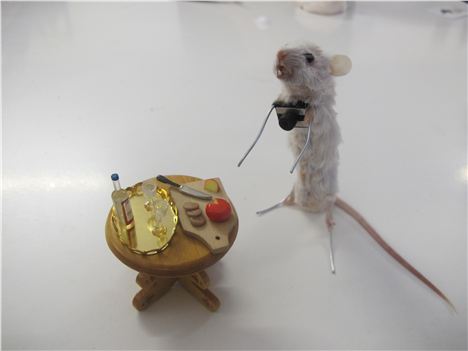 The class had actually turned out to be great fun, once you got past the initial gore of disembowelment, pulling off limbs, tongue-ripping and skull crushing. Yes some people may have their qualms and PETA would undoubtedly throw a monumental wobbler, but there was genuine fascination and a certain element of sentimentality in the room. These people genuinely cared about their mice – and weren’t complete crackerjack stabby mentalists, which was nice.

Must dash though – the zombies are coming and I smell like mouse mince.

Oh and just for the sake of it, here's the world's worst mouse:

£60 for a four hour class. Shannon will be back in Manchester soon but no dates have as yet been set.

Enquiries can be emailed to ofcorpsetaxidermy@gmail.com