A Guide To&#8230; The Office Christmas Party

IT’S the middle of November. Which only means one thing - no, not the premature return of the Coca-Cola advert -  the return of the forced festive office get-together also known as the ‘Christmas Do’.

For many, it’s actually the ‘Christmas Don’t’.

You can be sure the whole of the company will know by the following day and the bits you would have preferred to stay blurry will have you cringing into your cuppa, post ‘do’.

Stapling your hand to the desk would be far less painful than seeing colleagues outside of the working week annihilating the free bar looking like they’re on the next Booze Britain documentary.

For the rest, it’s a chance to absolutely annihilate the free bar - cue the woop woops.

Those who do attend will more than likely fit into one of the following categories:

Usually the one who doesn’t get out much and so feels the need to document every single second of the night with their early Christmas present. Everyone else feels even more drunk because they’ve been temporarily blinded by the flipping flash. And then the 634 snapshots are individually uploaded to Facebook the next day with overly positive adjective-filled captions telling of how ‘great’ and ‘amazing’ the night was, when they really ended up in Yates's.

The one who attempts to be in every picture possible taken by their equally annoying photography bud - even if it is a photo bomb because they’re so ‘crazy’. After one too many fishbowls, they end up in a black cab home with a carton of cheesy chips for company before it’s even hit ten o’clock. Then comes a ribbing from the rest of the office until the next one’s arranged and so the cycle begins again.

Not to be confused with Peak-Too-Sooner, it's the typical do-gooder at the desk in the corner who doesn’t say boo to a goose for the other 364 days of the year. But once they’re out of that confinement they’re also out of their shell and usually first up on the karaoke slaughtering Gloria Gaynor’s finest work. Either that or they start inappropriately grinding against the clueless Christmas temp who’s actually up for anything.

This one has probably already scoped out their potential (and literal) Christmas Do protégée weeks before and strategically picked out an ensemble that highlights all of their, er, best bits. Of course, the ‘accidental’ arm rubbing and chat up lines that make Stilton look mild aren’t just exclusive to their prey - even the decrepit caretaker might get a look in. 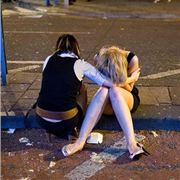 Perhaps a cousin of The Shameless Flirt, after more than enough alcohol (free or otherwise), they lose all inhibitions and, apparently, their sense of personal space. Hair stroking and hand holding are mild symptoms of the touchy-feeler, most likely teamed with stronger side effects such as tears of their recent divorce while blubbing “Why does nobody love me?!” Sling it.

A Christmas do wouldn’t be a Christmas do without the overly eager party planner who runs round in early October trying to get everyone on board so that there’ll be a group discount. Probably best to cut them some slack; there’s a lot of pressure riding over them and just because they’re the organiser doesn’t mean they’re responsible for cleaning up Peaked Too Soon’s vom. But when the free bar opens, it’s literally a free-for-all. Who cares if they had to ring round seventeen venues to find the best discount? Give them a sly nudge and get on in there first. Besides, nobody wants a drunk organiser.

When a free bar is mentioned there’s no guessing who is immediately writing their name down on the list. You’ve grown tiresome of the “Ooh have you got a spare pound I can borrow?” and noticing how quickly the milk in the communal fridge goes down, so with the free loader just as long as your money is a bar or two away from them, you can bare to endure the drunken small talk, no doubt about work. Yawn. 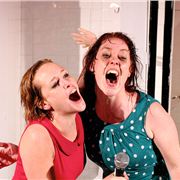 Forever filing their nails/claws, whatever antics happen on the night out you can be sure the whole of the company will know by the following day and the bits you would have preferred to stay blurry will have you cringing into your cuppa, post ‘do’. This is the one who will make jibes about the Free Loader and stare disapprovingly at The Flirt’s outfit (or lack of). And even worse, the one who orders Moet from the bar - using up a tab that could be better spent on Sambucas.

The one who suffers the tears and the touches, the Gloria Gaynor renditions and the constant flashing of that bloody camera. The Sober One is the patron saint of Christmas dos – there to help everyone else get home in one piece. Either that or they actually agreed to be nominated driver.

And so if you find yourself thinking, “Yes I do that!” whilst reading this, then maybe this should be a ‘Christmas Don’t’ for you, for our sake not yours.

After all, it’s only a Christmas party, which typically ends up to be a flop because of the months of hype built up around it.

In the words of my ever-expressive mum: “Christmas Dos?”