From exhibitions to glitter stations and a special IPA... celebrate this Thursday 8 March

Though it's an annual celebration, this year's International Women’s Day (Thursday 8 March) is especially significant as it marks 100 years since some women were first allowed to vote. Add Manchester's claim as the birthplace of suffrage, and it’s unsurprising the city is celebrating IWD with gusto.

This year’s theme is Press for Progress: while society has come a long way, the likes of gender pay gaps and #MeToo mean we still have a way to go - making this centenary year both a celebration and a call to arms.

With that in mind, here are fifteen empowering events to get involved in…

She’s often overshadowed by her mother Emmeline but, not only was Sylvia Pankhurst a prominent activist in both the early suffragette movement and later anti-fascism, she was also an award-winning artist. Here, MAG presents a series of Pankhurst’s paintings and pastels, reflecting her typically honest portrayal of working women.

Also currently at MAG is the first retrospective for nearly a century of local Victorian painter Annie Swynnerton, who was elected the first female Associate Member of the Royal Academy in 1922. Not an International Women’s Day event per se but a timely tribute nonetheless.

The culmination of a week of events organised by The Business Sorority, a group for young women who support one another personally and professionally, this high-profile ceremony takes place at the Free Trade Hall - which hosted the first public suffrage meeting, in 1868- and includes a keynote speech by Joanne Roney, CEO of Manchester City Council, drinks reception, panel debate and showcase of local female performances.

Granted, it was in tribute to a man (her husband) but it was Enriqueta Rylands who founded one of Manchester’s most important cultural icons. With a rich archival collection to boot, spanning Pankhurst to C.P. Scott, where better to discover the history of women’s suffrage?

She’s often portrayed as a subservient Victorian stereotype - albeit a very gifted one - but just what were Gaskell’s views on the position of women in the mid nineteenth century? At her former home on Plymouth Grove, volunteers consider the evidence.

‘Nomadic alternative cabaret’ purveyors Pen:Chant have joined forces with Gorilla to throw a massive IWD party: bursting at the seams with art, craft, performance, talks, DJs, music, comedy and even a glitter station. They’ll be raising money for WAST (Women Asylum Seekers Together) throughout the night too - good on ‘em.

Another cracking event for a cracking cause - this non-for-profit social enterprise is holding a wellbeing day in memory of Dr Bernadette Tynan, who died of endometrial/womb cancer last year. As well as talks with leading doctors, there will be counselling, healthy food ideas, therapeutic juices, yoga, massage and counselling.

And another. Join The Clink (a restaurant at Styal women’s prison that trains inmates in hospitality) and Smart Works (a charity that provides free interview clothes and job training to woman in need) as they host a luxurious afternoon tea. The event also includes a raffle and an inspirational talk with Sally Lindsey MBE.

Levy Market is making its 2018 debut with a special International Women’s Day special this weekend. Expect the usual popular indie showcase, plus a pop-up art exhibition, live music from female performers and design workshops with Owl and Coconut.

It’s been commonly accepted as a ‘man’s drink’ for centuries, but the history of brewing is actually dominated by women. In Ancient Egypt, beer was almost entirely made and consumed by women, a trend which continued until the Black Plague; after which brewing became more commercialised and moved firmly into the hands of men. Runaway and the Women’s Institute are celebrating the fem-ale renaissance with a special IPA.

Closing the Suffragette City: Portraits of women in Manchester Music exhibition in suitable style, The Refuge is hosting an all day and night (into the small hours of the next day) party. With music across two floors by an all-female DJ line-up, and proceeds to Women's Aid & the Manchester Digital Music Archive, it’s girl power on steroids. Check out the city council IWD programme for more empowering events citywide.

Are women still told how to dress in 2018? Based on an original Victorian dress, first installed in the Ancoats Art Museum in 1887 as statement on what women should wear, this exhibition considers just that; aided by creative responses by young women from Wythenshawe.

Based on Helen Tse’s bestselling novel Sweet Mandarin, this evocative new play by award winning writer In-sook Chappell, tells the extraordinary story of the women behind the famous Manchester restaurant: from the skyscrapers of Hong Kong to shocking secrets and the lifeline that holds one family together - food.

Aptly taking place on the Emmeline Parkhurst barge, this centenary cruise includes pop-up characters from women’s history, poetry from Common Word, a presentation from Dr Kate Cook and literary maverick Shirley Mae. Guests will be encouraged to share their own stories there’ll be celebratory drinks and nibbles.

Emmeline will be celebrated throughout the year in various events at the Pankhurst Centre, Alexandra Arts’ Pankhurst in the Park and the unveiling of the WoManchester statue in December. 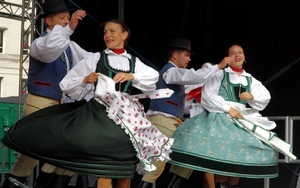