Dubbed a Brexit vanity project, the ‘creativity and innovation’ fest is ploughing ahead regardless

‘The Festival of Great Britain and Northern Ireland’ was first proposed during Theresa May’s government. Conceived as a defiant show of pride following our departure from the EU, it’s presently known as Festival UK* 2022 (*working title) - very catchy - and will comprise of ten ‘open, original, optimistic, large-scale and extraordinary acts of public engagement’ that represent creativity and innovation across the four nations.

Ironically dubbed ‘The Festival of Brexit,’ the event was divisive even before COVID-19; labelled a ‘nationalistic branding exercise’ by groups like Migrants in Culture and an ‘out-of-touch vanity project’ by others. But after a year that has shaken our creative industries to their core, leaving many venues threatened with closure and workers without livelihoods, ploughing £120 million into a future event ‘that no one in the public has demanded, and many sectors of the public simply do not want’ (Music Venue Trust) strikes a particularly bitter chord.

The Music Venue Trust, which launched a petition opposing the festival at the start of the coronavirus outbreak - urging the government to instead spend the money on a ‘Cultural Infrastructure Hardship Relief Fund’ - recently announced a Traffic Light Campaign, splitting grassroots music venues into the perceived security of their future. Currently there are 273 amber venues (those at risk of closure between now and 31st March without additional support) and 30 red (those in imminent danger of permanent closure).

Red venues, now relying on a public crowdfunder, were deemed ineligible for the government’s £1.57 billion cultural recovery fund - despite being valued community institutions. They're not the only ones, with treasures like Frog and Bucket and Sale's Waterside also out in the cold and relying on public generosity to get them through.

These are but a handful of examples, reflecting performing arts in particular; there have been more many more funding victims throughout the creative industries as a whole, from nightclubs to conferences and exhibitions.

It isn’t just organisations who are falling through the coronavirus cracks either, as highlighted by Excluded UK - a collective of 3 million taxpayers from many industries, including those in the creative and innovation sectors (collectively known as STEAM: science, technology, engineering, arts and maths) that Festival UK* 2022 will represent. These span those made redundant to self-employed, none of whom qualify for funding. As observed by GM Mayor Andy Burnham, this has left people like theatre freelancer Becky ‘relying on charities for food.’

Festival UK* 2022 is currently supporting ‘100+ freelancers’ and there will be ‘many more opportunities’ nearer the event. But this will be little solace for the millions like Becky whose livelihood is at stake now; similarly for the multitude of organisations denied a safety net during the pandemic. 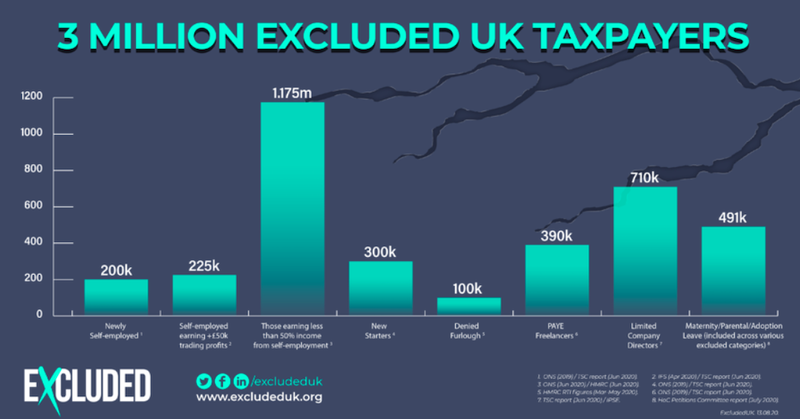 Speaking of which, over 500 businesses and individuals have been enrolled in the festival’s first stage; split into 30 teams, they represent the four British nations and all STEAM sectors. Each have been given up 100,000 to develop ideas for the project, which will ultimately comprise of just ten events.

That’s £100,000 to develop an idea that has a one in three chance of going ahead…when many enterprises and professionals have been denied funding for their very survival.

Of course those listed in this article aren't the only ugly outcomes of the pandemic; many societal issues have been exacerbated, from child poverty to mental health issues. Added to which we don’t yet know how the outbreak will play out and it seems that spending £120m on Festival UK* 2022 is a questionable order of priorities...