Paint the town: the best street art in Liverpool

Liverpool is awash with technicolour street art - and we’re not talking about the "Ya Ma is a grass" and the "Yer Da sells Avon" of the graffiti world either. The city has become an alluring canvas for large-scale wall murals and urban art over recent years and as it happens, is also home (or neighbour) to a number of über-talented mural artists.

Paul Curtis, Akse and Calum Medforth are amongst the rabble of gifted, Northern artistes who have lined the streets of Liverpool with their extraordinary urban art - but who else has made the city their easel?

We drop pins on just some of Liverpool’s most crowd-pulling wall art so you can add them to the map (and your Insta Story) on your next meander around the city. 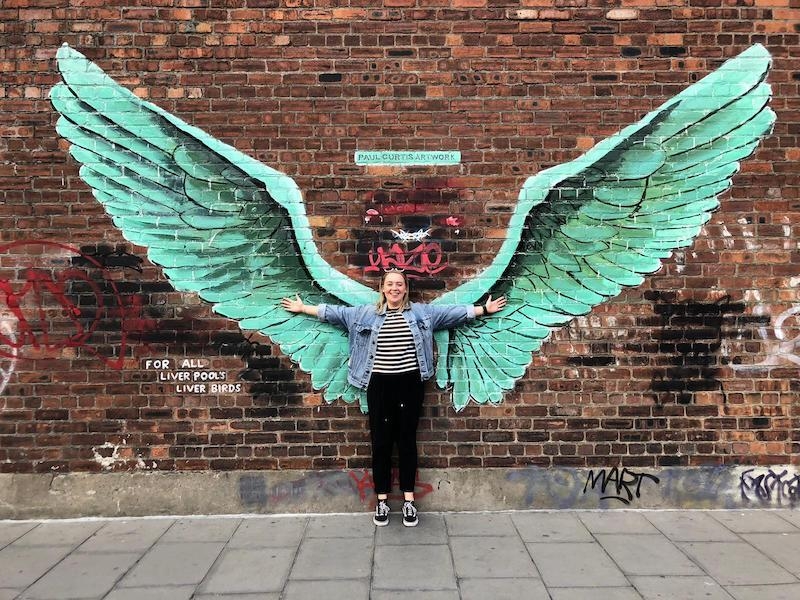 Writing an article about Liverpool street art without mentioning the For All Liverpool's Liver Birds wings would be sacrilegious. The giant, mineral green wings painted directly on brick by the legendary Paul Curtis popped up in the Baltic Triangle back in 2017. Since then, thousands of visitors and locals alike have flocked to stand in front of the outstretched wings, to transform themselves into a human-Liver Bird hybrid (including Yours Truly).

Where to find it: Jamaica Street L1 0AH 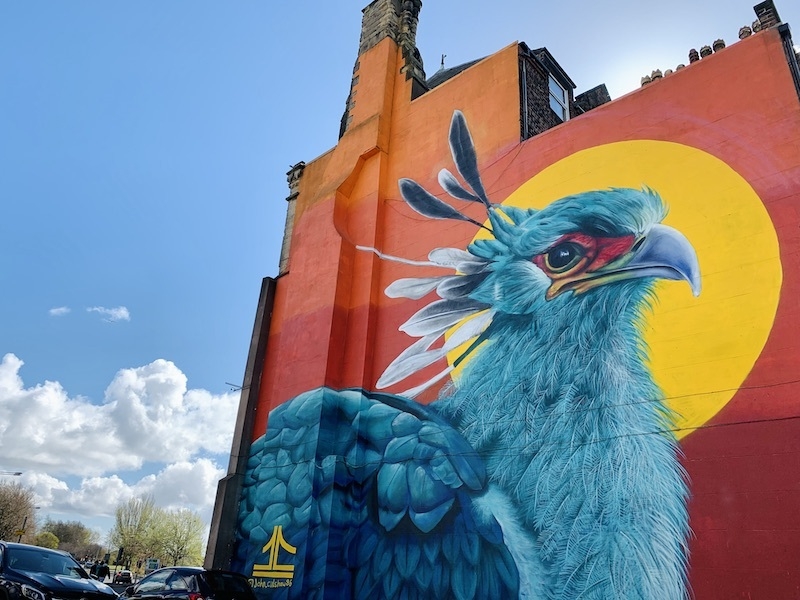 John Culshaw is another Liverpool-based mural artist who has taken the iconic Liver Bird as his muse to create an incredible piece of wall art on the side of a Grade II-listed building. Funded through the Liverpool Without Walls initiative, the artwork features a detailed interpretation of the beautiful bird against a vibrant, graphic sunset. 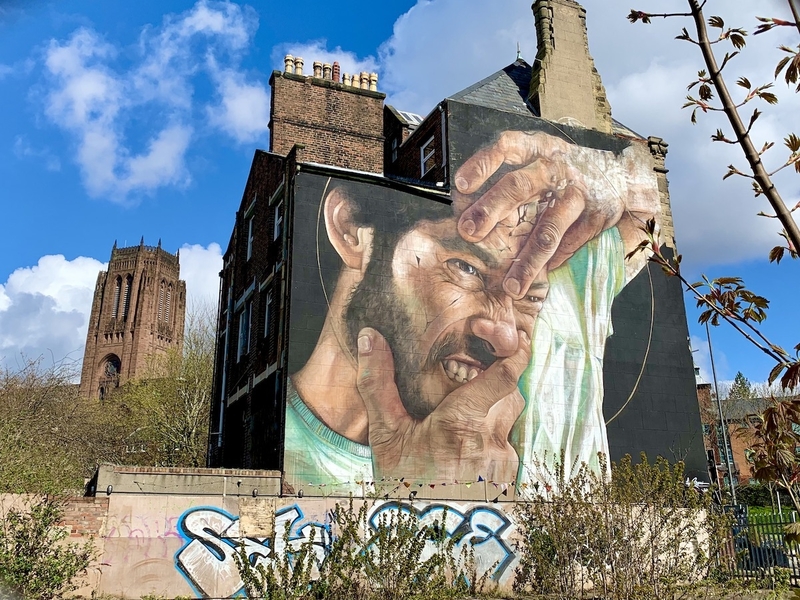 On the other side of The Wedding House is another striking piece of artwork in the shadow of the Anglican Cathedral. The 50ft mural of a man seemingly pulling his own face off, is by Brazilian artist Liam Bononi. The expressive eyes and hands are distinctive features that are present in most of his works. Liam says that the image is of a close friend and was also created through the Liverpool Without Walls culture fund - hence the name. 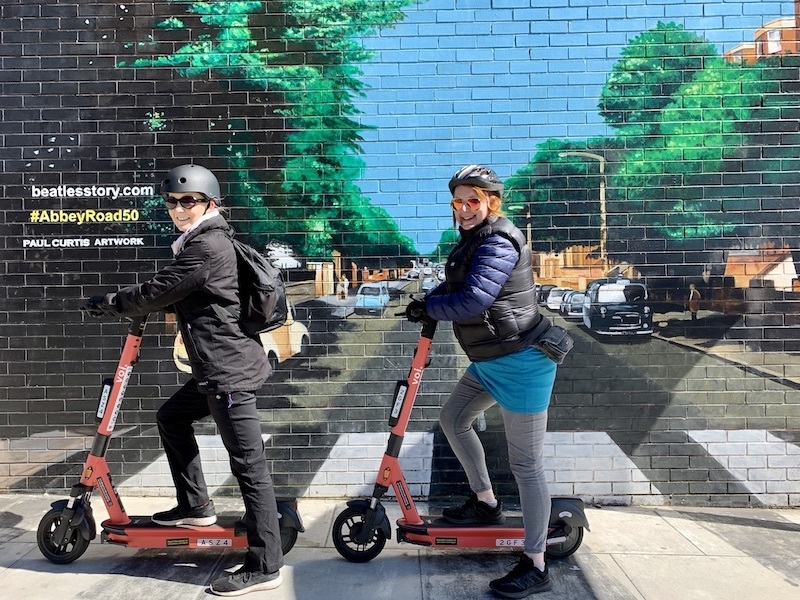 Commissioned by The Beatles Story in honour of the Abbey Road album’s 50th anniversary in 2019, this immersive work plays with dimension to allow passersby to recreate the famous Abbey Road crossing. Find it on the side of Cain’s Brewery in the heart of the Baltic Triangle district.

Where to find it: Grafton Street L8 6SF

At 21m high, the towering, landmark artwork on the side of the Tempest Building is one of the tallest murals in the north of England. Created by all-female group, Nomad Clan, the mural is designed to signify new beginnings and flourishing entrepreneurship in the city. More than a bit bad-ass.

Where to find it: 12 Tithebarn Street L2 2DT 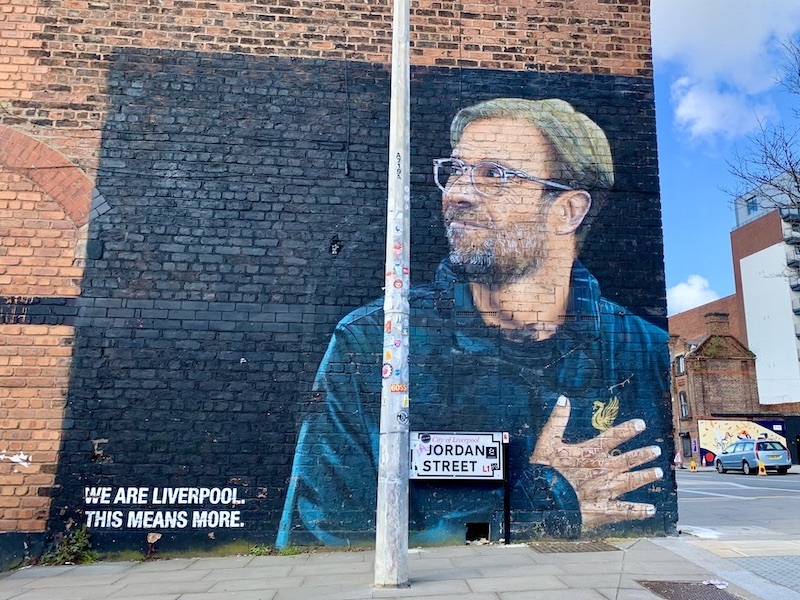 Let’s talk about bricks, baby… the brick wall in the Baltic Triangle that has been adorned with a giant portrait of beloved Liverpool FC manager, Jürgen Klopp that is (albeit pre-laser eye surgery) - courtesy of graffiti artist, Akse. Boom.

Where to find it: Jordan Street L1 0BW

Brought to life by local muralist, Cal Medforth, Ernie the Giant takes up residence on the walls of Ten Streets Market, ready to snap a photo of you with his equally elephantine smartphone.

Where to find it: Cotton Street L3 7BX 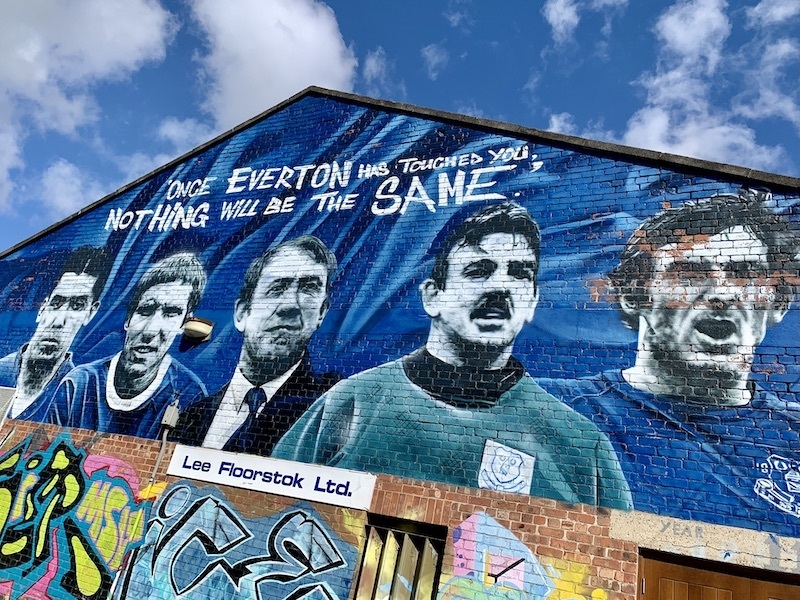 Everton (MurWalls x Kit It Out)

In 2020, equality and inclusion organisation, Kit It Out joined forces with British street artists group, MurWalls to create a piece of work paying homage to four of Everton FC’s most celebrated players. Catch the boys in blue in the Baltic Triangle.

Where to find it: Greenland Street L1 0BS

If you’re around the business district, it’s hard to miss this giant ginger-haired docker painted on the side of Shenanigans pub. The piece is inspired by the heritage between Liverpool and Ireland, which began in the 1800s when the building was built.

Where to find it: 77 Tithebarn Street L2 2EN

Step a little outside the city centre, not far from Anfield Stadium and you’ll find a large mural of LFC right-back, Trent Alexander-Arnold, commissioned by the Anfield Wrap. The piece is dedicated to Fans Supporting Food Banks - a collaborative initiative between Liverpool FC and Everton FC, dedicated to tackling food poverty across the city.

Where to find it: Sybil Road, Anfield L4 0RR 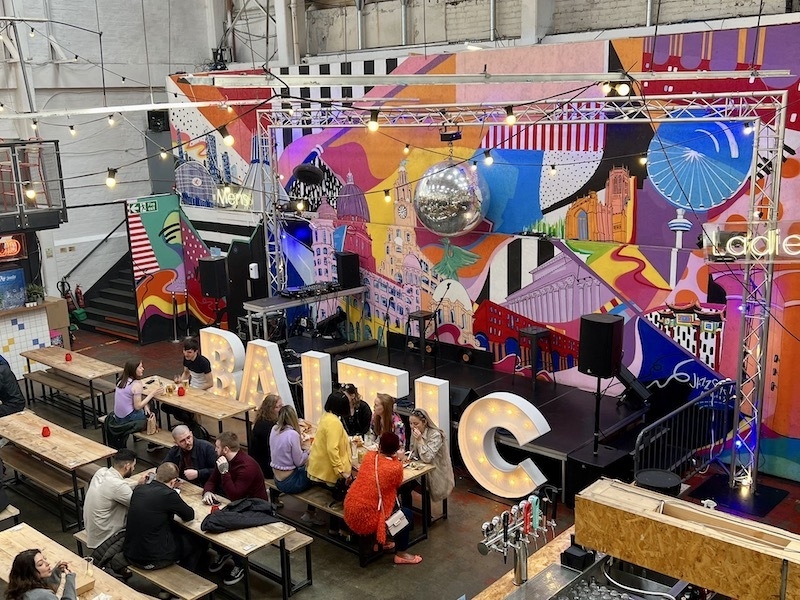 If the rain is pouring and you don’t fancy going on a wall mural crawl outdoors, you can find a whole host of Jazz Stan’s incredible mural work in various venues across the city - the Baltic Market, PINS bowling alley, Liberté and Turncoat Bar just to name a few. There’s loads of incredible street art in the Fabric District, but this piece by Irish artist Shane O’Malley certainly brings plenty of colour and cheer to the place. Shane’s strong use of colour stems from his origins in graffiti culture and he’s painted graffiti and murals around Ireland and Europe. Routes was completed in 2018 as part of the Contrast Mural Festival.

Where to find it: Gildart Street L3 8LB 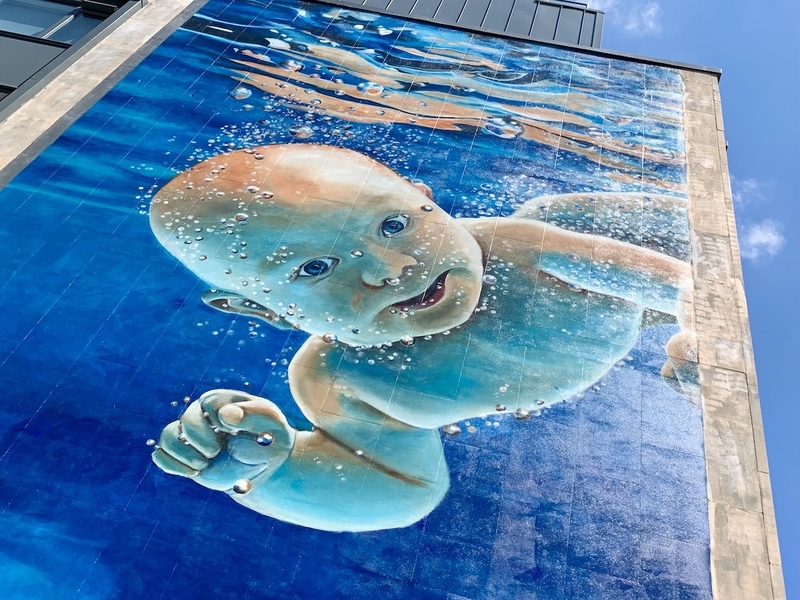 A huge baby swimming underwater in Liverpool city centre. Measuring 18 metres high and 10 metres wide, this mural is potentially the largest street art painting in the centre of Liverpool. Located on the side of The Abbey Road bar, the baby is said to represent the rebirth of Liverpool and the new hopes following the Coronavirus lockdowns. And the name? At the time of painting, Paul’s sister was expecting a baby boy, named Ethan.

Where to find it: Harrington Street L2 9QA

Read next: The seaside town whose street art has united a community

Read again: An insider’s guide to the Baltic Triangle